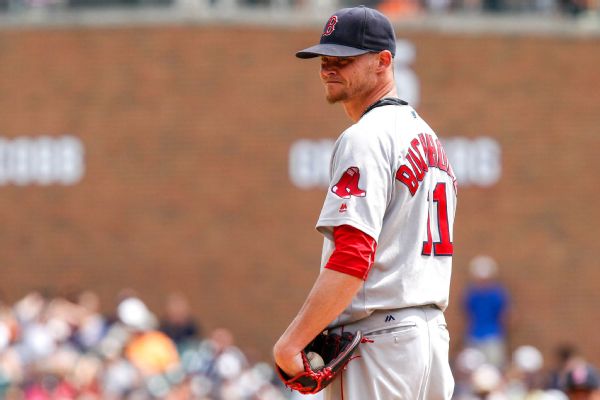 The Red Sox picked up their $13.5 million option on Buchholz's contract at the end of last season, but there was always a possibility he could be traded in the offseason. It became almost inevitable two weeks ago after the Red Sox completed a blockbuster trade for ace left-hander Chris Sale, giving Boston seven major league starting pitchers.

Although the Red Sox could have opted to trade lefty Drew Pomeranz -- and would have obtained a greater return for him by virtue of his lower salary and a contract that is controllable through 2018 -- multiple teams that spoke with president of baseball operations Dave Dombrowski during and after the winter meetings suggested he strongly preferred to move Buchholz, who is eligible for free agency after this season. The Phillies agreed to pay his 2017 salary, which also decreased the prospect value the Red Sox received.

"When it came down to it, as we looked under all scenarios, the deal that made the most sense was dealing Clay," Dombrowski said. "The others have some longer time with us as far as being with the organization. We have longer control over them. He's in his last year, the dollar perspective. It was really our choice to pursue this one rather than some of the other guys."

Phillies general manager Matt Klentak said on a conference call that the team had asked the Red Sox about Buchholz as far back as last July, before the trading deadline, because they viewed him as "a potential bounce-back candidate" even before his second-half resurgence.

"There's no such thing as too much starting pitching," Klentak said. "I've been saying all offseason that if an opportunity makes sense, we would explore that. And the Buchholz acquisition reflects that. This wasn't necessarily a position we were trying to fill, but we felt the opportunity was right."

Klentak also mentioned Buchholz's history with Phillies pitching coach Bob McClure, who once held the same position with the Red Sox until he was fired in 2012.

"Clay is very excited to be reunited with Bob," Klentak said.

Buchholz spent 10 seasons with the Red Sox, and expectations for him were impossibly high from almost the day he was drafted with the compensatory first-round pick obtained when Pedro Martinez signed with the New York Mets. The bar was raised even higher on Sept. 1, 2007, when Buchholz no-hit the Baltimore Orioles at Fenway Park in only his second career start.

Dogged by injuries, Buchholz made frequent trips to the disabled list. He never pitched more than 189 innings in a season and averaged only 140 innings per season from 2010 to '16.

"He thought maybe it also was a spot where he gets a change of scenery, fresh opportunity," Dombrowski said of Buchholz. "Not always a bad thing, as he mentioned."

Buchholz also outlasted high-profile starters Josh Beckett, Daisuke Matsuzaka, Jon Lester and John Lackey in Boston. He wound up going 81-61 with a 3.96 ERA in 206 appearances (188 starts). In six career postseason starts, Buchholz was 0-1 with a 4.25 ERA. Save for the no-hitter, Buchholz's crowning moment with the Red Sox was arguably grinding through a shoulder injury to pitch four innings in Game 4 of the 2013 World Series against the St. Louis Cardinals, a series the Red Sox won in six games.

Tobias, 24, hit .291 with 9 home runs and 69 RBIs last season in two stops in the Phillies' minor league system. He finished the season at Clearwater, Philadelphia's affiliate in the Class A Florida State League.

Buchholz joins a Phillies rotation led by 2011 American League Rookie of the Year Jeremy Hellickson, who was 12-10 with a 3.71 ERA last season. The right-hander accepted the team's qualifying offer of $17.2 million earlier this offseason.

The Phillies already had seven pitchers on their roster who made at least 10 starts in the major leagues last season, so the trade for Buchholz will bump one of their young starters -- likely Jake Thompson, Zach Eflin or Alec Asher -- out of the rotation.

The Phillies now have signed five players this offseason -- Buchholz, Howie Kendrick, Pat Neshek, Joaquin Benoit and Hellickson -- who are on the last year of their contract, which could put them in position to be one of baseball's most active sellers before the trading deadline.