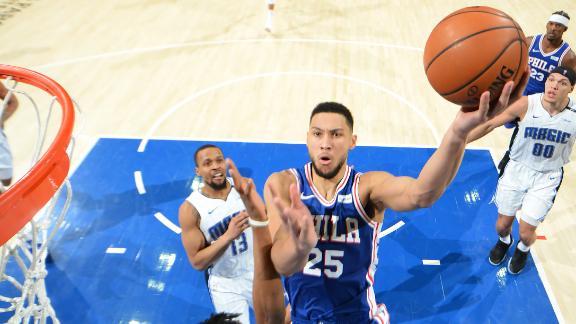 PHILADELPHIA -- JJ Redick hit six 3-pointers and scored 26 points to break out of a slump and lead the Philadelphia 76ers to a 114-106 win over the Orlando Magic on Tuesday night.

Orlando entered the game in the mix with Charlotte and Miami for the eighth seed in the Eastern Conference playoffs. The Magic have been one of the more baffling teams of late, holding recent wins over Toronto, Golden State and Indiana and losing to Chicago, Cleveland and New York.

They couldn't complete the comeback against another top team late in the fourth. Nik Vucevic pulled the Magic to 101-99, but they missed five straight shots -- including Vucevic's in-and-out with 3:34 to go -- and Jimmy Butler stretched the lead with a spin move over Jonathan Isaac for a bucket in the paint. Isaac came back and buried a 3 to again slice the deficit to one, and again it was Butler who answered with a big bucket.

Butler had the assist on Mike Scott's third 3 of the game and the Sixers held on and improved their push for the third seed in the East. Ben Simmons had 16 points and 13 rebounds for the Sixers.

Evan Fournier led the Magic with 25 points and Aaron Gordon had 24.

Simmons and Joel Embiid are the All-Stars who have carried the Sixers from "Process" to prominence. But it's Redick who keeps defenses honest as the team's lone reliable 3-point threat. The 34-year-old Redick entered as the only member of the Sixers to make at least 100 3s, and the Sixers scuffled as he endured his longest dry spell of the season. Consider, in a three-point loss to Golden State on Saturday, Redick missed all 3 attempts.

Against the Magic, Redick shot like the guard who deserved serious All-Star consideration. He was 5 of 6 from 3-point range in the first half (7 of 10 overall) and paced an offense that shot 64 percent in the half and led 70-64.

Redick had been seriously slumping -- he was 23 of 81 overall over his last seven games and hit 15 3s. Redick, who had his first 20-point game since Feb. 10 against the Lakers, has played his best ball with Embiid in the lineup, but the big man missed his sixth straight game with a sore left knee.

Magic: The Magic played without guard Markelle Fultz, the former Sixer and No. 1 pick of the 2017 draft. The Sixers traded Fultz to the Magic at the deadline and rid themselves of one of the more confounding players in team history. Fultz had a series of injuries that cost him time (notably thoracic outlet syndrome) and a mental block his former trainer attributed to the "yips." Fultz played 19 games this season and is not expected to play for Orlando the rest of the way. Sixers coach Brett Brown called Fultz "an elite person" and added of the 20-year-old guard, "I hope he can resurface. I believe he will."

76ers: Brown said Embiid could at least join the Sixers for their game Friday at Houston. ... Big man Jonah Bolden sat out with an illness.

Sixers: At Chicago on Wednesday.