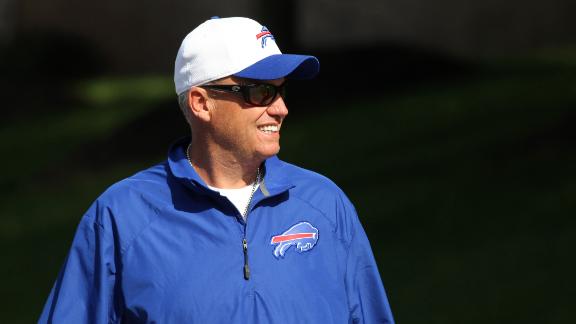 Buffalo Billscoach Rex Ryan's true feelings about his final season with the New York Jets have been trickling out over the past few months. In his latest soul-bearing session, Ryan revealed he anticipated before the 2014 season that it would be his last with the team.

"I knew we weren't going to have a good team when we never did anything in free agency. I knew that," Ryan told Andrea Kremer in a sitdown interview that will air next week on HBO's "Real Sports."

Privately, Ryan expressed frustration last offseason when the Jets basically sat on their hands in free agency, except for signing wide receiver Eric Decker. The HBO interview marked the first time he was so vocal about it.

Ryan and Idzik were fired in late December, and soon after, the Jets hired their replacements, Todd Bowles and Mike Maccagnan. Ryan took the Bills job in January. Buffalo lost its preseason opener 25-24 to the Carolina Panthers on Friday night.

To this day, Ryan is convinced owner Woody Johnson didn't want to fire him.

Ryan is probably right about that, because Johnson took plenty of heat when he retained Ryan in 2013 after firing Mike Tannenbaum. A second reprieve would've been a disastrous public relations move.

Ryan neglected to mention, of course, that missing the playoffs four straight years might have had something to do with his ouster.