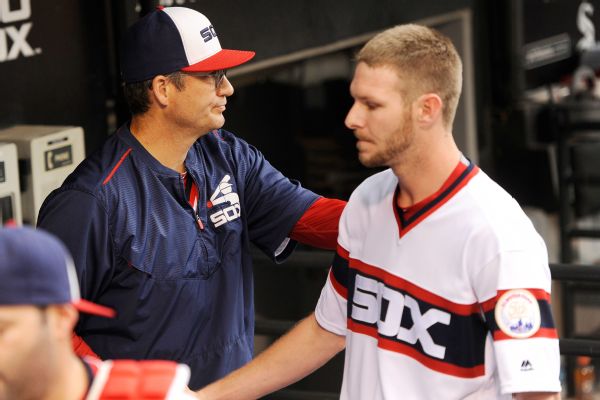 SCOTTSDALE, Ariz. -- As the White Sox gauge the trade market forChris Sale, their decision to pursue a deal or stand pat will be rooted in baseball concerns rather than any lingering animosity from past confrontations with the team's ace.

Sale's ongoing differences with the Chicago front office came to the fore in July when he sliced up the team's throwback uniforms rather than wear them in a game. He received a five-game suspension for insubordination and destroying team equipment.

But White Sox general manager Rick Hahn told ESPN.com on Tuesday that past rifts will play no part in the team's offseason deliberations.

"It's a nonfactor,'' Hahn said from the MLB general managers meetings. "It's zero factor from our standpoint in terms of his fit with us or our belief that he can help be the anchor of a championship-caliber rotation.

"Whether it influences some other club's view of him, I don't know. I don't think it should. I think a lot of what we've seen from Chris is part of what makes him great. It's that competitiveness, that fight, that sometimes spills over a little bit into areas outside the white lines. It's part of what makes him so good during the game.''

Sale, 27, is likely to be a hot commodity for teams in search of a front-line starter because of his track record and his contract. Since 2012, Sale ranks fifth among MLB starters with a 3.04 ERA, third in strikeouts (1,133) behind Max Scherzer and Clayton Kershaw, and third in baseball-reference.com's wins above replacement (27.6) behind Kershaw and Scherzer.

The White Sox finished fourth in the American League Central with a 78-84 record this past season and haven't finished above .500 since 2012. Manager Robin Ventura resigned at the end of the season, and Rick Renteria was chosen to replace him.

While a Sale trade would be a clear indication that the White Sox plan to rebuild rather than try to make a playoff push in 2017, Hahn declined to address which way the team might be leaning.

"We have a pretty firm sense internally about what we want to accomplish,'' Hahn said. "But I've been saying this for months back in Chicago: There's just not any advantage to us to declare publicly exactly what we're trying to accomplish.