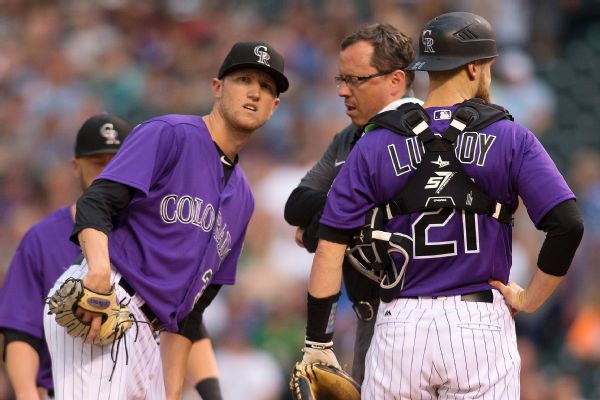 DENVER -- The Colorado Rockies placed rookie left-hander Kyle Freeland on the 10-day disabled list on Saturday, a day after he was forced to leave his start in the first inning because of a left groin strain.

Freeland, who leads both the team and major league rookies with 11 wins this season, had thrown 11 pitches and recorded one out when he was lifted from Friday night's game against the Philadelphia Phillies because of the injury.

Freeland said Saturday that he tweaked his groin when he ducked to avoid catcher Jonathan Lucroy's throw to second base in a bid to prevent a stolen base. He threw a couple more pitches before the pain shooting down his leg made it impossible to continue, and manager Bud Black, in consultation with team trainers, pulled him from the game.

In related moves, the Rockies optioned RHP Scott Oberg to Triple-A Albuquerque while recalling RHPs Shane Carle andCarlos Estevez. The Rockies wanted to bolster their bullpen after using five pitchers to get the last 26 outs in Friday's 5-4 win over the Phillies.