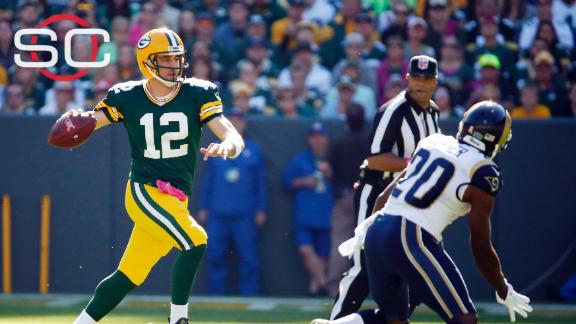 And he didn't just throw one. He added a second one moments later in Sunday's 24-10 victory over the St. Louis Rams.

According to ESPN Stats & Information, it's the first time Rodgers has thrown multiple interceptions at home since Week 7 of the 2010 season against the Minnesota Vikings.

The numbers since Rodgers' last home interception on Dec. 2, 2012 -- also against the Vikings -- were staggering. He threw 586 consecutive passes and 49 touchdowns between Lambeau Field interceptions. He then went only six more passes before he threw another one.

"It was a lot of fun," Rodgers said of his streak. "Have to start a new one. I figured might as well break the streak with a couple of interceptions today. Yeah, streaks are meant to be broken, so it's fun to put something together like that. But I'm sure someone will come along at some point and put up 600 in row maybe."

After a long pause, Rodgers added: "Maybe not."

Rams linebacker James Laurinaitis picked off Rodgers in the first quarter of Sunday's game on a deflected pass. It was one of three turnovers Rodgers committed. Rodgers threw his second interception of the game as the Rams' Trumaine Johnson picked him off with 4 minutes, 10 seconds remaining in the second quarter.

He also lost a fumble in the third quarter when Robert Quinn sacked Rodgers, forced a fumble and the Rams recovered, making it the quarterback's first three-turnover game since Week 9 of the 2009 season, against the Tampa Bay Buccaneers.

"He's human sometimes, man, you know what I mean," Packers receiver James Jones said. "But it's very rare. It's very rare. So when you get him without his cape on, you better catch it."

When asked which of his three turnovers bothered him the most, Rodgers said: "All of them."

Before Sunday, Rodgers' last interception at Lambeau Field came in Week 13 of the 2012 season. It was on a flea-flicker that Vikings safety Harrison Smith picked off -- a play Rodgers claimed earlier this a year he did not remember.

Rodgers' streak ends as Packers improve to 5-0
Despite throwing his first interception at home in nearly three years, Aaron Rodgers rebounds with two touchdowns to guide Green Bay to a 24-10 win over the Rams.

Rodgers: 'I turned it over too many times'
Packers QB Aaron Rodgers and coach Mike McCarthy recount the team's offensive struggles against the Rams and how the defense stepped it up in Green Bay's 24-10 victory over St. Louis.