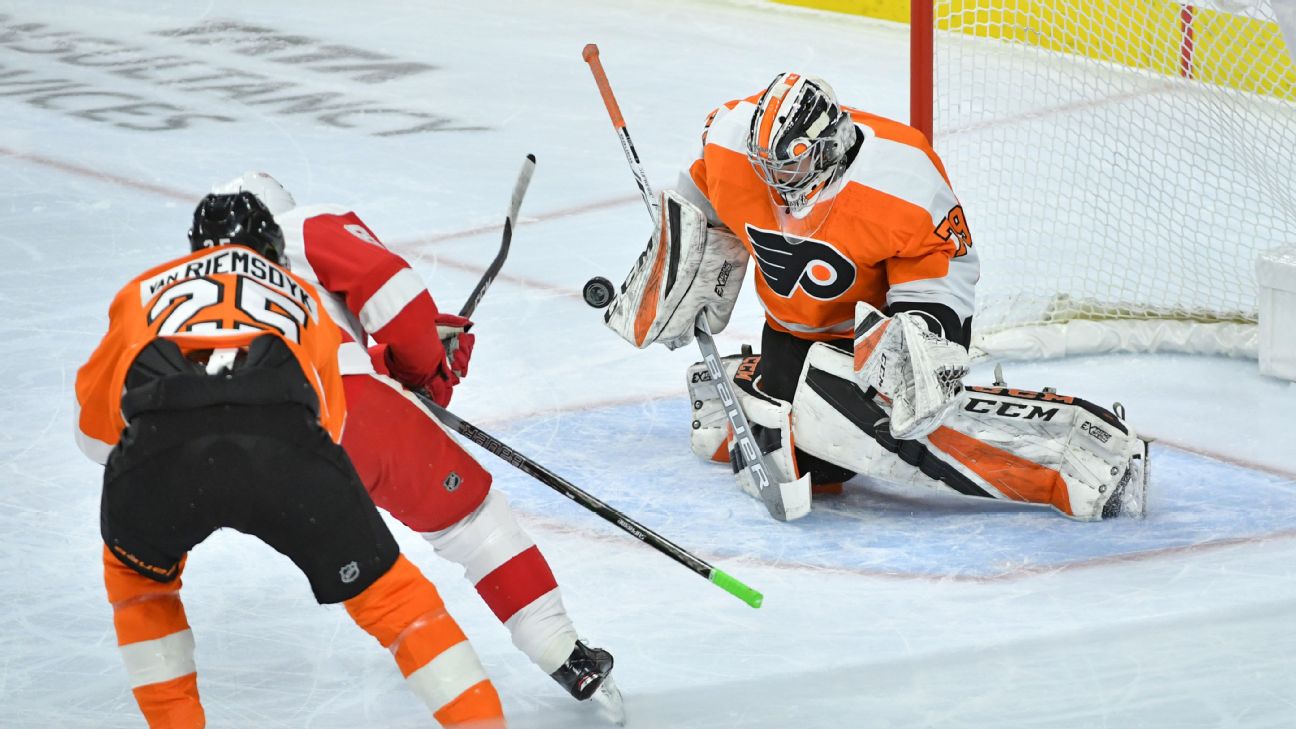 The Philadelphia Flyers' 3-2 win over the Detroit Red Wings on Tuesday night marked a new era for the franchise. It was the first game under interim coach Scott Gordon, who replaced the fired Dave Hakstol on Monday. Perhaps more importantly, it marked the successful NHL debut for a rookie the Flyers hope could become the franchise goaltender they've been seeking for decades: 20-year-old Carter Hart.

"It was something special tonight to be out there,'' Hart said after his first career start,which saw him make 22 saves for the Flyers (13-15-4), who emerged from the Eastern Conference basement with the win. "I was trying not to think about it before the game. Now, it's starting to sink in a little bit.''

Hart was called up on Monday as the Flyers once again shuffled around their maligned goaltenders, who collectively had the worst save percentage in the NHL this season (.874). With Brian Elliott and Anthony Stolarz injured, and Alex Lyon shipped back to AHL Lehigh Valley, Hart became the sixth goalie to start for the Flyers this season, marking the 14th time in league history a team has used six goalies in a season and the only time it has happened within the first 35 games.

It has been a meteoric rise for Hart. He was selected in the second round of the 2016 NHL draft (No. 48 overall) and played for the Everett Silvertips junior team, where he starred. Hart is the only player ever to win the Canadian Hockey League Goaltender of the Year Award twice. Hart turned pro with the Lehigh Valley Phantoms this year, where Gordon coached him.

Hart earned the call-up after a strong recent stretch in which he went 4-1-0 with a 1.81 goals-against average and .939 save percentage.

"For a 20-year-old goalie, it was pretty impressive how calm he was,'' Flyers captain Claude Giroux said. "Good start for him.''

Against Detroit, Hart stopped all eight shots he faced in the first period, as the Flyers took a 1-0 lead on a James van Riemsdyk goal. Hart surrendered his first NHL goal on the penalty kill in the second period, as fellow rookie Dennis Cholowski snapped a shot from the slot. He gave up another goal in the third period, asJacob De La Rosewas left alone in front of the net and got a quick shot through Hart.

But the rookie managed to close the Red Wings out after that for his first NHL victory, which included a save late in the game with the Detroit net emptied.

"We didn't make it hard enough on [Hart],'' Red Wings coach Jeff Blashill said. "If I was the coach on the other bench, I would have thought it was an easy game for my team.''

The Flyers mobbed their rookie goalie after the victory, with Gordon calling it "a great first game for him."