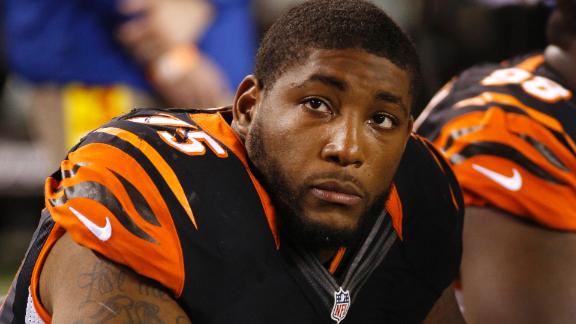 Still's 4-year-old daughter is battling Stage 4 pediatric cancer, and the Bengals announced this week that proceeds of his jersey sales would go toward pediatric cancer research.

Payton donated all of the jerseys, sized small and medium, to the Pediatric Care Hospital in Cincinnati.

"I had heard about him on the radio and the challenge he's going through," Payton said. "So when I got in the office the other day, I just mentioned to [assistant Jason Mitchell], 'Let's do something.' [Bengals owner] Mike Brown has been a great owner in our league. We've practiced with Cincinnati before. We've had a lot of close ties there.

According to Bengals director of sales and public affairs Jeff Berding, Still's jersey sold more in the first 24 hours of the donation drive than any other Bengals player's jersey ever has in a single day.

Earlier this year, the Saints reached out to support another member of the NFL fraternity. The team signed a giant get-well card for former Buffalo Bills quarterback Jim Kelly, who also was battling cancer (and since has been declared cancer-free).

The Saints also reached out in their community this summer when they signed paralyzed former Tulane safety Devon Walker to a NFL contract after the draft. Walker was later placed on injured reserve and has a bio dedicated to him along with the Saints' other players in the team's media guide.

On Thursday, Berding told ESPN.com that as of 5 p.m. ET at least 1,500 Still jerseys had been sold. For most of the day, staff has been behind in processing the orders, despite the hiring of additional part-time help to handle the response. Also, when members of the pro shop staff arrived at Paul Brown Stadium at 7:40 a.m. ET Thursday, they had 1,200 orders waiting from overnight that had to be processed.

Information from ESPN.com Bengals reporter Coley Harvey is included in this report.