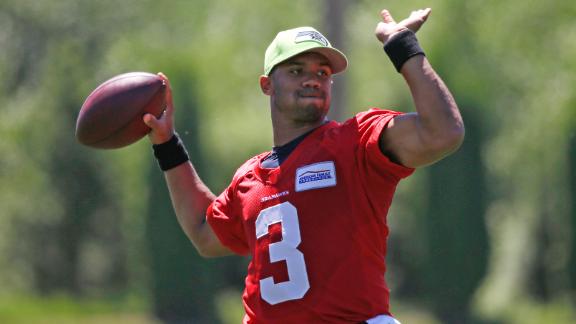 Seattle Seahawks quarterback Russell Wilson gave the team another not-so-subtle message about his contract negotiations while making an appearance Monday on a North Carolina radio show, saying, "I've gone through the ups and downs before and been moved around before."

Wilson spoke on 99.9 The Fan in Raleigh, the city where he spent the first three years of his college career at NC State.

But Wilson transferred to Wisconsin for his senior season when former NC State coach Tom O'Brien didn't want him to play minor league baseball in the spring and summer.

Wilson had that in mind Monday when asked about his contract talks. He is believed to be seeking a five-year deal that would pay him in excess of $110 million and make him one of the highest-paid players in the NFL.

"At the end of the day I trust the process," Wilson said. "I know God's going to take me and put me where he wants to have me. I hope that's Seattle. I love it there, it's a great place. But I've gone through the ups and downs and been moved around before. I loved NC State and loved playing there and then having to go somewhere else and start new."

Wilson's message seems to be he's ready to play elsewhere (including a trade) if the contract situation is not resolved. Wilson is in the fourth and final year of his rookie contract, a $2.99 million deal that will pay him $1.54 million this season if he doesn't agree to a contract extension with the Seahawks.

The team also has the option of placing the franchise tag on Wilson next year, which likely would cost over $23 million for the 2016 season. The Seahawks could keep him through 2018, although the cost would be prohibitive to do so.

Wilson recently took out an insurance policy to cover him from injury if he plays this season without a new deal.

He has sent out some seemingly cryptic tweets in recent weeks, including a one-word tweet: reciprocity, which means the practice of exchanging things with others for mutual benefit.

"It's a good word,'' Wilson said. "I like to get some dictionary words out there every once in a while. But the answer is no [on any hidden meaning]. But I think everybody should use it. It's important for everybody to have a reciprocal relationship."