Self, Calipari: No calls from NBA 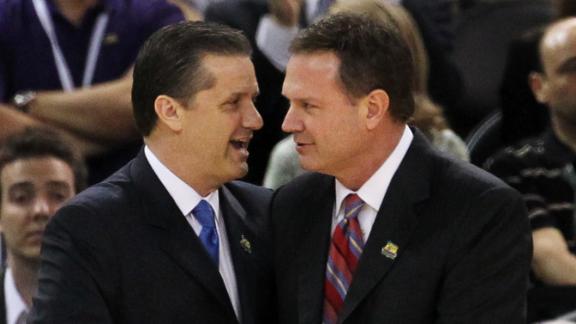 Kentucky's John Calipari and Kansas' Bill Self told ESPN on Monday that it'd be extremely difficult for either to leave their current high-profile college jobs for an NBA opening, and both added that they haven't been contacted during this latest coaching carousel.

"They haven't talked to me about a coaching position,'' Self said on ESPNU's College Basketball podcast. "There's nothing going on and that doesn't bother me one bit.

"I think I've got a better situation than a lot of the franchises in the league. People may think that's hard to believe, but they haven't been here or know what's gone on here. Very content where I am."

Donovan has commented recently at SEC meetings that he had been in contact with NBA teams and didn't want to guarantee a return to Florida in large part because he didn't want to lie if something did occur.

Ollie signed a five-year contract last month with the Huskies, doubling his salary to $2.8 million ($3 million with incentives) after winning the national title in April.

Izzo said on the ESPNU podcast last month that he would be back at Michigan State.

"I'm really, really excited what we've got going at Kentucky," said Calipari, who could have the preseason No. 1 team again with the return of starters Andrew and Aaron Harrison, as well as Alex Poythress, Willie Cauley-Stein, Marcus Lee, Dakari Johnson and a top-five recruiting class led by Karl Towns Jr. and Trey Lyles.

"I believe that I have the best job in the country. I'm not out there looking for another job. It's not what I want. Do I talk to NBA teams? I always do. I will talk to NBA teams based on the fact my players are trying to be drafted. But I'm not out looking for a job. I'm not encouraging anybody to call me. I don't need it to get a pay raise or any of that stuff. I'm good where I am."

Calipari said he had a different attitude when he was at Memphis and UMass.

Self said it would be extremely difficult to deal with losing in the NBA.

"It would be hard,'' Self said. "From an ego standpoint, we all are used to winning and we like to win. We went 25-10 this year and it sucked. I say that jokingly. We haven't lost 10 games in one season in 14 or 15 years [at Tulsa in 1999], something like that, since my second year at Tulsa or maybe longer than that. Can you imagine losing 50 or 60 games in a year?

"I'm not saying never, but certainly this is a pretty good situation."

Calipari said it would be too drastic a change.