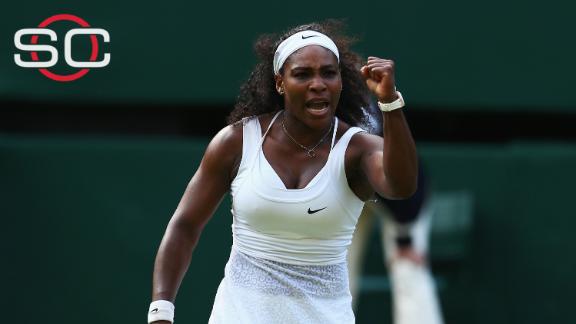 Twice, Williams was oh-so-close to the end of her bid for a fourth consecutive major title -- and for the third leg of a calendar-year Grand Slam.

And twice, pushed to the precipice, Williams regrouped, resisted and wound up winning, as she so often does.

Stomping her foot after misses, alternately screaming in delight or despair, even wagging her finger at fans who booed her, the No. 1-seeded Williams overcame a surprisingly staunch challenge from 59th-ranked Heather Watson and emerged with a 6-2, 4-6, 7-5 victory in the third round Friday.

"I honestly didn't think I was going to win," said Williams, who trailed 3-0 and 5-4 in the final set. "How I pulled through, I really don't know."

Her 24th victory in a row at Grand Slam tournaments sets up a showdown Monday against another five-time Wimbledon champion, her older sister Venus.

"We've been facing each other a long time," said the 16th-seeded Venus, who eliminated 82nd-ranked Aleksandra Krunic of Serbia 6-3, 6-2.

This will be the 26th all-Williams matchup and the first at a major since Serena beat Venus in the 2009 Wimbledon final. Overall, Serena leads 14-11.

"She's in better form than I am," Serena said of her older sister, "so I think she has a little bit of an advantage going into that match. But at least one of us will be in the quarterfinals, so that'll be good."

Nothing in any other match Friday offered up the tension and drama provided by Williams and Watson. Especially once Watson -- playing steadily, if unspectacularly -- appeared on the verge of a significant upset.

"She just did everything so well. I wasn't able to keep up. You know, sometimes you just don't have your day," said Williams, who lost in the third round at Wimbledon last year. "I thought maybe today just wasn't my day."

It sure looked that way when Watson took six straight games to go up two breaks in the third set. Then came an epic, 18-point game that began Williams' comeback. Watson twice was a point from leading 4-0, but she looked a bit tight, shanking a forehand about 5 feet long, then pushing a forehand wide to get broken.

Still, she broke Williams at love for a 5-4 edge, moving within a game of by far the biggest victory of her career.

At the ensuing changeover, Union Jacks of various sizes flapped in the swirling wind while chants of "Heather!" reverberated through the nearly century-old arena. When play resumed, yells came during points, and Williams complained to the chair umpire, drawing jeers.

"When she needs to hit the line or needs to hit a winner, she'll just do it," Watson said, "and that's what she did."

That began a match-closing run of three consecutive games for Williams, who held at love for a 6-5 lead with four unreturned serves.

"I don't know where she found this strength today to win it," said Williams' coach, Patrick Mouratoglou, "because she was so far mentally at a certain point."

Williams broke Watson to finish things, yet even that didn't come easily. Williams needed three match points, cashing in the last with a backhand return that forced a miss by Watson.

There weren't all that many unforced errors from Watson: She totaled 11, Williams 33.

"She couldn't play better," Mouratoglou said about Watson. "She played the perfect match."

At the moment, even that is apparently not enough to beat Williams.

Now her older sister will give it a try.

In other women's play, former champion Maria Sharapova beat 29th-seeded Irina-Camelia Begu of Romania 6-4, 6-3 and has yet to drop a set. The first woman to make it to the fourth round was American Coco Vandeweghe, who beat former US Open champion Samantha Stosur 6-2, 6-0. It's the first time the 47th-ranked Vandeweghe has reached the final 16 at a Grand Slam tournament.