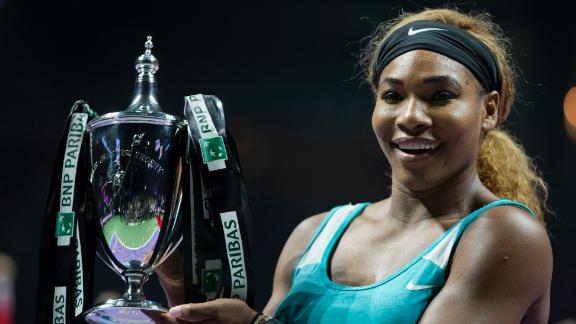 Halep easily beat Williams just four days earlier during the group stage of the tournament, but the American turned that around with an aggressive game plan.

Williams won 11 of the last 12 games in the match to join Martina Navratilova and Steffi Graf as the only players to have won five titles in the season-ending championships.

The 33-year-old pulled out of her previous two tournaments with illness and a knee injury, yet still claimed the $2 million first prize, claimed the Billie-Jean King Trophy and also had a breed of orchid named after her in recognition.

"I just started training, because I had such a bad knee in Beijing I didn't know if I'd be able to play here, and now I have won the Billie-Jean King trophy -- I am so excited," Williams said.

The match was the most one-sided championship match in the WTA Finals since Kim Clijsters beat Amelie Mauresmo 6-2, 6-0 in 2003.

Williams changed her approach from the group-stage contest, attacking Halep's second serve with fierce ground strokes, and regularly rushing the net to cut the points short and prevent her opponent from playing her preferred style.

"I had to play more Serena-style tennis and just do what I do best," Williams said.

"I was expecting a much better player than I was in the earlier round. Being ready for that really was able to help me out."

Halep's run in this tournament capped a remarkable rise, having gone from No. 64 in the rankings to No. 4 in the course of 17 months, with a French Open final appearance along the way.

However, her relative lack of experience of big occasions compared to the 18-time Grand Slam champion proved telling.

"I was nervous before the match that I had to play this big final," Halep said. "I couldn't manage very well the situation.

"I knew that she would be more motivated during this match because we played a few days ago and I won."

The irony of Sunday's match was that Halep had it within her power to deny Williams a place in the final. Halep went into her final group-stage game knowing that if she lost in straight sets, Ana Ivanovic would go into the semifinals at Williams' expense. Instead, Halep lost in three and Williams made it in.

"I have no regrets because I did my job on court against Ivanovic," Halep said. "That was the chance but she deserves to win the title. She's much better."

Williams said she would have done the same thing if in Halep's shoes, namely try to win the group game despite the temptation of knocking out her most dangerous rival.

"No one on the tour thinks like that," Williams said. "She definitely gives her all so I don't think that went through her mind at all."

Halep got the first break of the match in the third game and was up 40-0 on serve in the next and looked capable of repeating the surprise 6-0, 6-2 victory over Williams on Wednesday. However, Williams broke back in that fourth game and the course of the match was changed.

Halep won only three points fewer than Williams in the opening set but clinched just seven points in the entire second set -- including only two on return. The set was over in just 25 minutes.

Halep's serve, so effective throughout the tournament, let her down on the big stage where she won fewer than half her first-serve points while Williams won 77 percent.

Halep tried in vain to change the momentum, even trying a drop shot from well behind the baseline, but her spirit and body language quickly deteriorated in the face of Williams' relentless attack.

Williams had 25 winners against just five by her opponent.

Halep's victory in the group stage ended Williams' 16-game winning streak at the WTA Finals, but the American built her career win-loss record in the championships that feature the top eight players to 29 wins and five losses. Williams also retained the season-end top ranking, taking that honor for the fourth time.

The doubles final was even more one-sided with Cara Black and Sania Mirza -- in their last match together as a pairing -- routing defending champions Peng Shuai and Hsieh Su-Wei 6-1, 6-0. 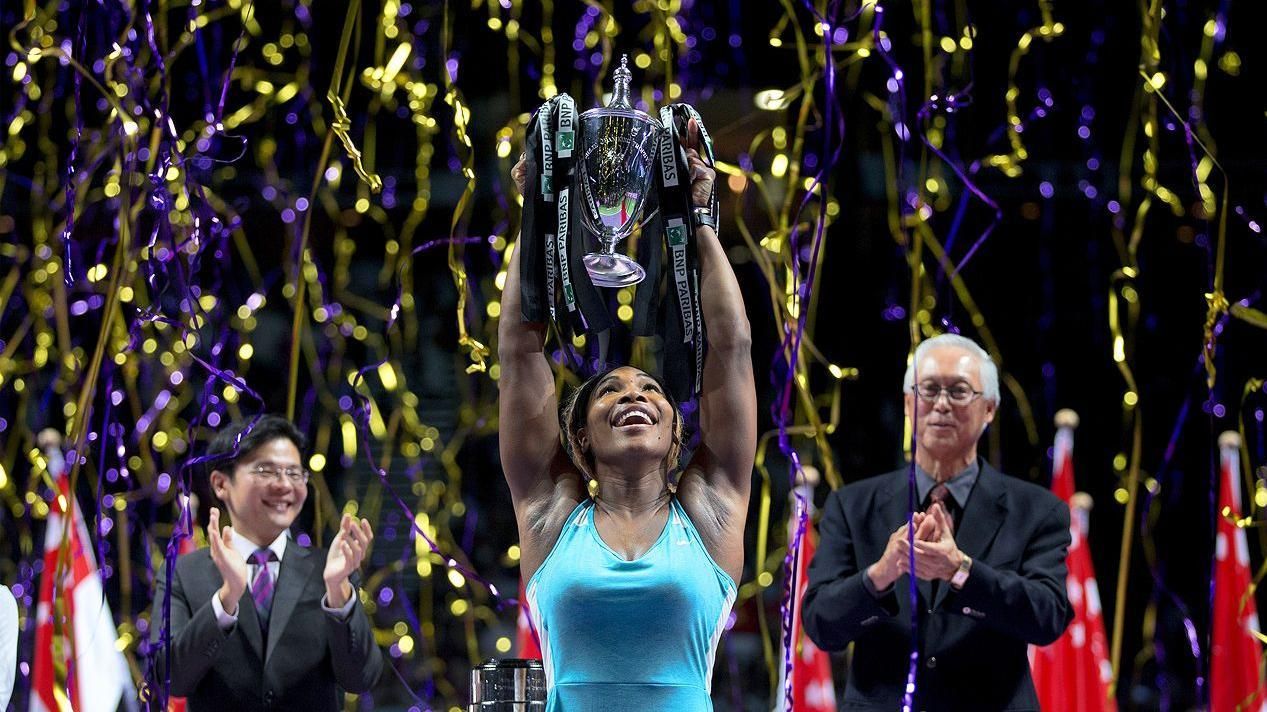