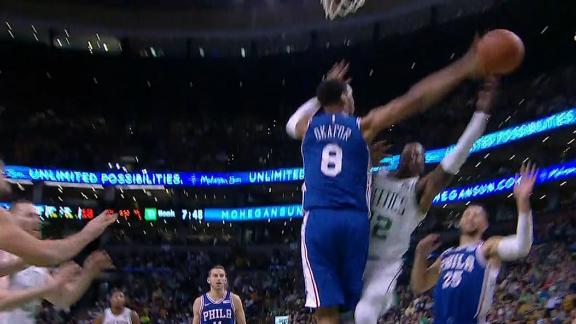 WithJahlil Okafor's role further diminishing, his representatives and the Philadelphia 76ers are collaborating to find a suitable trade for the young center, league sources tell ESPN.

Sixers coach Brett Brown informed the local media on Friday that Okafor is currently out of the rotation and that the second-unit spot isAmir Johnson's to lose. The frontcourt logjam of Joel Embiid, Ben Simmons and Dario Saric leaves Okafor expendable.

Okafor, 21, has a fourth-year option of $6.3 million that the Sixers have to make a decision on by Tuesday. According to league sources, whether they pick it up depends on the trade discussions, but it's likely that it's exercised.

At the moment, there are no trade front-runners, sources say.

Okafor, who has been professional and has worked rigorously on his body throughout this process, is healthy and fit for the first time in years and is poised to thrive with a change of scenery, according to sources.

Okafor has only played in one of the team's five games this season, in which he registered 10 points, nine rebounds and two blocks in 22 minutes off the bench. His statistics dipped from his first season to his second due to lack of consistent playing time.

The No. 3 pick in the 2015 draft has been on the trading block since last season.