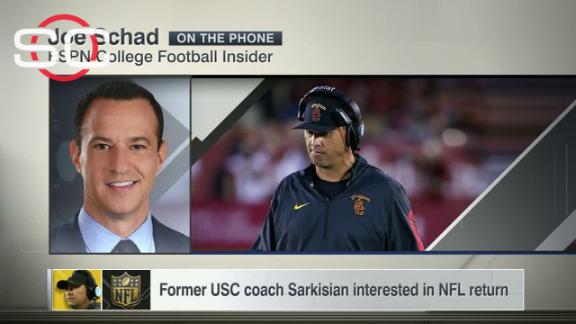 FormerUSChead coach Steve Sarkisian is putting out feelers to NFL teams and has expressed interest in returning to the NFL as either a quarterbacks coach or an offensive coordinator, league sources told ESPN NFL Insider Adam Schefter.

Sarkisian, 41, was hired to succeed fired Trojans coach Lane Kiffin in December 2013. He went 9-4 in his first season, and USC finished the year ranked No. 20. He compiled the nation's consensus top recruiting class heading into the 2015 season but was asked and agreed to take a leave of absence Oct. 11 after, sources told ESPN.com, he arrived to team facilities appearing to be intoxicated.

This came two months after Sarkisian's behavior while apparently under the influence of alcohol and painkillers at the Salute to Troy function in August drew national headlines. He later apologized and said he would be getting unspecified treatment but said he didn't believe he had a drinking problem. At that time, he blamed his unsteady appearance on combining alcohol with medication.

In announcing the leave of absence, USC athletic director Pat Haden said it was "clear to me that he was not healthy." A day later,Sarkisian was on a flight to enter alcohol-rehabilitation treatment when he was fired by Haden via email.

Sarkisian filed a $30 million wrongful-termination lawsuit against USC on Dec. 7, saying the school "kicked him to the curb."

The suit asserts that Sarkisian has, at times, been "a person with a disability" under federal law because of his alcoholism and that the stress of his job contributed to his alcohol dependency.

The suit says Sarkisian is now sober and ready to return to coaching, but USC "has taken away his team, his income and a job that he loved."

Sarkisian, a former BYUquarterback who played in the CFL, was an assistant under currentSeattle Seahawkscoach Pete Carroll on the Trojans teams of the previous decade. Coaching alongside Kiffin, Sarkisian ran USC's offense and coached Heisman winnersCarson Palmerand MattLeinart before being hired by the University of Washingtonto take over a winless program in 2009.

Sarkisian's one NFL stint came in 2004, when he helped QB Rich Gannon and theRaidersimprove from 27th to eighth in passing yardage while working as Oakland's quarterbacks coach.

Information from ESPN's Shelley Smith, Brett McMurphy, Joe Schad, Garry Paskwietz and The Associated Press was used in this report.