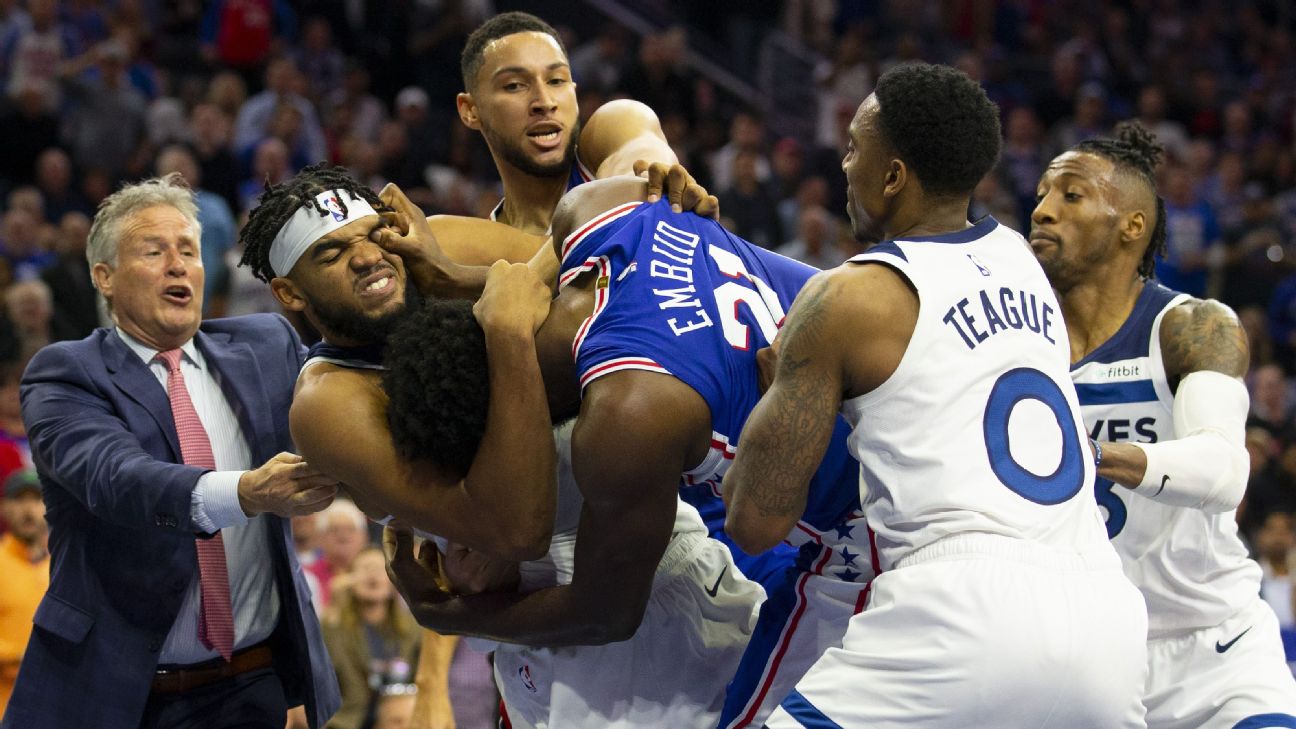 ESPN
By Adrian Wojnarowski
As the NBA's investigation into the altercation between Joel Embiid and Karl-Anthony Towns begins, the Minnesota Timberwolves are rejecting the game officials' characterization of Philadelphia 76ers star Ben Simmons as a "peacemaker" in the fracas, league sources told ESPN.

Referee Mark Ayotte told a pool reporter Wednesday night that Simmons was "deemed a peacemaker" for an act that included him holding Towns to the floor in what the Timberwolves contend was a "dangerous chokehold," league sources said.

Simmons told reporters after the game that he's "always got my teammate's back." Sixers general manager Elton Brand delivered a statement of support to ESPN on Embiid's and Simmons' roles in the skirmish.

"First and foremost, we obviously don't condone the altercation that happened last night," Brand said. "As a former player, I have experienced situations like that in the past. I understand how our players reacted in the moment. I have their backs."

The Sixers have told the NBA that they believe Towns was the aggressor in the altercation with Embiid -- and were adamant in supporting the referee's conclusion that Simmons played the role of peacemaker.

The NBA plans to review tape and interview participants and witnesses beginning Thursday. Embiid and Towns are facing possible suspensions.

Embiid and Towns became tangled in the third quarter of the Sixers' 117-95 victory and wrestled each other to the floor before coaches and teammates separated them. Towns initially threw a punch that didn't land on Embiid, who later poked Towns in the eye with his thumb.

Embiid reveled in the skirmish on his way off the court, shadow boxing and pumping his arms to the frenzied Sixers fans before disappearing into the tunnel.

Embiid and Towns also exchanged barbs on social media late into the night, including some coarse language.

"I didn't throw any punches, so I shouldn't get suspended," Embiid said.

Ayotte, the officiating crew chief, told a pool reporter: "We deemed the altercation a fight. Therefore, by rule, they're both ejected. I just saw them each lock arms. And that escalated to the fight."

Embiid and Towns entered the game as two of the season's most dominant players on two teams that now have a combined 7-1 record. 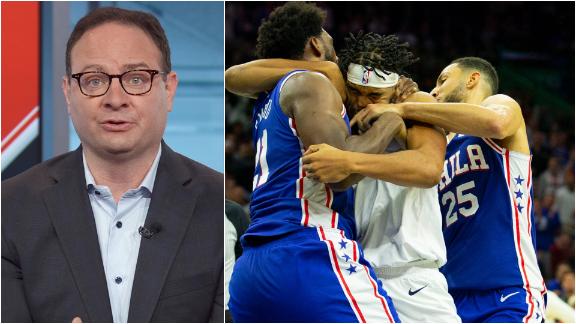 Woj: Wolves disagree Simmons was a 'peacemaker'
Adrian Wojnarowski reports that the Timberwolves have taken exception to the NBA's assessment that Ben Simmons played "peacemaker" between Joel Embiid and Karl-Anthony Towns. 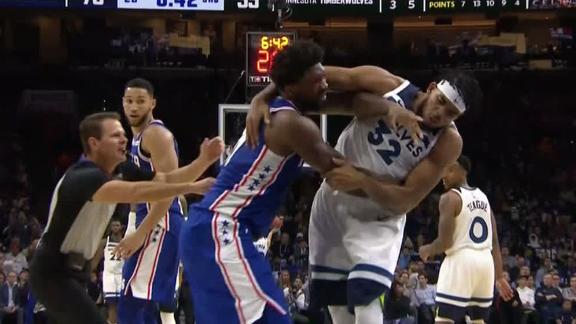 Embiid and Towns ejected after fight
Joel Embiid and Karl-Anthony Towns get into a shoving match after a rebound in the third quarter, and both are ejected.
Report a correction or typo
Related topics:
sportsespnnewsjoel embiidben simmonsminnesota timberwolvesphiladelphia 76erskarl anthony townsnba
Copyright © 2020 ESPN Internet Ventures. All rights reserved.
More Videos
From CNN Newsource affiliates
TOP STORIES