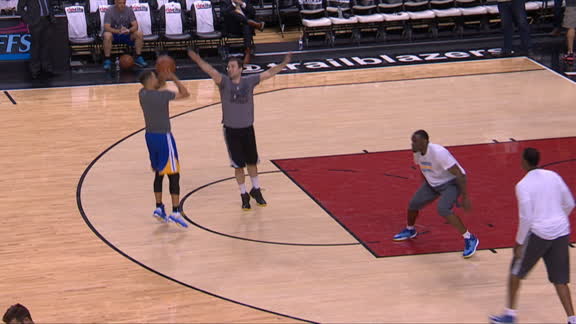 PORTLAND, Ore. -- Golden State Warriors starStephen Curry did not play in the team's 120-108 loss to Portland in Saturday's Game 3, but coach Steve Kerr said that Curry made progress earlier in the day in an informal session with some Warriors assistant coaches.

"It was [Curry's] first actual basketball, played 2-on-2 with the coaching staff," Kerr said before the game. "He's doing fine. He's not going to play tonight."

Curry sprained his right MCL when he slipped on a damp spot of the floor in Houston just before halftime in a win over the Rockets in Game 4 in the first round. Though Curry said earlier in the week he was hopeful he could suit up for Game 3 of this series, the Warriors have exercised caution with him, easing him into on-court drills.

"It's another good step, another good sign," Kerr said. "So we'll see how it goes tomorrow. We won't have a 5-on-5 scrimmage, because the guys who play a lot tonight are going to need to rest, but more than likely we'll put him into a 3-on-3 tomorrow and see how he does."

Kerr quipped that while Curry hasn't explicitly asked him to play, he suspected such a request was only a matter of time.