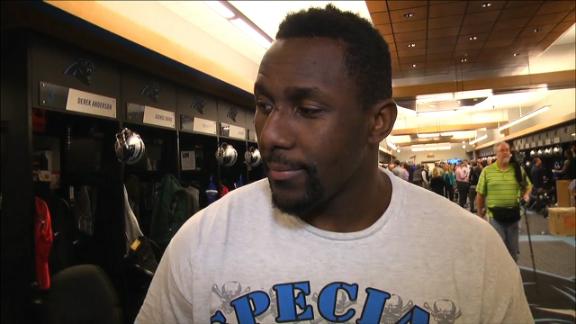 CHARLOTTE, N.C. --Carolina Panthers linebacker Thomas Davis said the surgery to repair his broken right forearm included 11 or 12 screws and a metal plate, but he "fully expects" to play in Super Bowl 50.

Davis is so optimistic about facing the Denver Broncos in Santa Clara, California, on Feb. 7 that he fought back when teammates playfully started grabbing at his arm.

"They kind of grabbed my arm like, 'You can't retaliate. You can't do anything,'" Davis said. "It was feeling a lot better today than it was yesterday, so I retaliated like, 'If you want to try me now.'

"It was all in fun. It feels good to be healing up now, knowing I have a lot more time to heal."

Davis broke the arm in the first half of Sunday's NFC Championship Game against the Arizona Cardinals. He said immediately afterward that he would be ready for the Super Bowl.

Nothing since has changed his mind.

"I'm excited about where I am right now," said Davis, speaking publicly about the injury for the first time since undergoing surgery Monday. "It hasn't changed. I'm still looking forward to playing in the Super Bowl."

He said the training staff is working on a couple of options, such as splints and casts, to protect the stitched area. The area was covered by just a clear bandage Thursday.

Davis did not practice Wednesday or Thursday, but he appeared at each session before going inside to work on his conditioning. It is doubtful Davis will practice before the team travels to California on Sunday because a padded practice is scheduled for Friday, and Saturday is an off day.

Just having Davis on the field for a short time has been an inspiration to his teammates.

"It shows his commitment to this team," linebacker A.J. Klein said. "He's going to do anything and everything in his power to play."

Davis, 32, said coming back this quick is not a selfish attempt so he doesn't miss his first and perhaps only chance to play in the Super Bowl.

"Man, even bigger than me having this opportunity, I want to go out and play for my team because I know I can help the team," said Davis, who finished second on the Panthers in tackles during the regular season behind middle linebacker Luke Kuechly. "That's what it's all about."

Asked whether there were concerns that Davis might further injure the arm if he plays, Panthers coach Ron Rivera deferred to doctors and said he prefers his linebackers make plays with their hands rather than their arms.

Rivera joked earlier this week that he is not "doubting Thomas," when asked whether Davis would play.

"Believe me, there is something about his conviction, the way he looks at things," Rivera said. "He's one of those young men that if at all possible, he's playing."