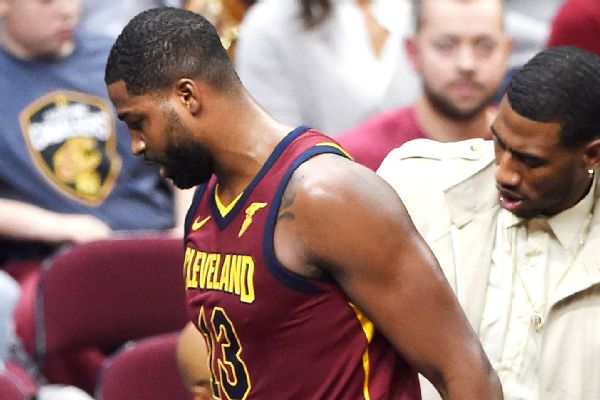 Joining in the half-court play on Wednesday after Cavs shootaround prior to their game against the Sacramento Kings was center Tristan Thompson, who has been out since Nov. 1 with a left calf injury.

Lue was encouraged by Thomas' play, saying, "There was contact; he looked good." On Thompson, Lue added he would "hopefully" play this week.

Thomas, who has not played in an NBA game in nearly seven months after a torn labrum in his right hip ended his season prematurely following Game 2 of the Eastern Conference finals, is expected to make his debut with Cleveland before the end of the month, according to the team.

When asked if recent developments in Thomas' rehab could accelerate that timeline, Lue said, "I'm not sure."

Thompson, speaking to reporters before the Kings game, said he would leave it up to the Cavs' medical staff to tell him when it is time for him to play again.

Thompson, whose league-leading "ironman" streak of 447 consecutive games played ended in April because of a sprained right thumb, has missed 17 straight games for the Cavs.

He then evaded another reporter's attempt to get an expected return date out of him.

"I'll be ready to return when the front office and them say I'm ready to return, yep, the medical team," Thompson declared. "I got to stay in my lane like LaVar Ball said,"he added, referring to the outspoken father of Lakers rookie Lonzo Ball.

Thompson, a seven-year veteran, said he has recalibrated his body expectations after all the wear and tear from his time spent in the league.

"You're never healthy," Thompson said. "When you play, what, five years straight, you'll never be 100 percent again. That's out the door. Maybe [Cavs rookie] Cedi [Osman] is 100 percent, but he's played a lot of high competition FIBA. So he might not be all right."

Lue said he would like to get more on-court work for Thomas and Thompson -- along with Osman, Ante Zizic and other members of the Cavs' G League affiliate Canton Charge -- before they return to his rotation.

"It went well, I felt good out there," Thompson said of the 4-on-4. "I was happy to play some contact, so, I was excited. I want to play pick-up again. Felt like summertime."

Earlier in the day, LeBron James pumped the brakes on any pressure being applied to his teammates coming back. "There's never been an urgency for any one of our guys that's gotten injured or hasn't been able to play to get back," James said. "That's not how we do it around here. When guys are healthy and are ready to get back in the lineup, then they'll be there, but there's never been no urgency for anyone."

James added that he would know about how well Thompson and Thomas are faring after gauging how their bodies feel on Thursday.

"At the end of the day it's all about the next day," James said. "When they say they feel good the next day after a workout session, that's great to know."

James admitted that he has visualized what the Cavs could look like when they're fully healthy, however, thanks to the help of a video game.

"I play a lot of 2K," James said. "I've said this before. I play a lot of NBA 2K. It's the most realistic basketball game you could ever play. I mix and match a lot of lineup changes and things of that nature to see how we can be really good. I've done that."

How does the video game version of the Cavs stack up in James' eyes?