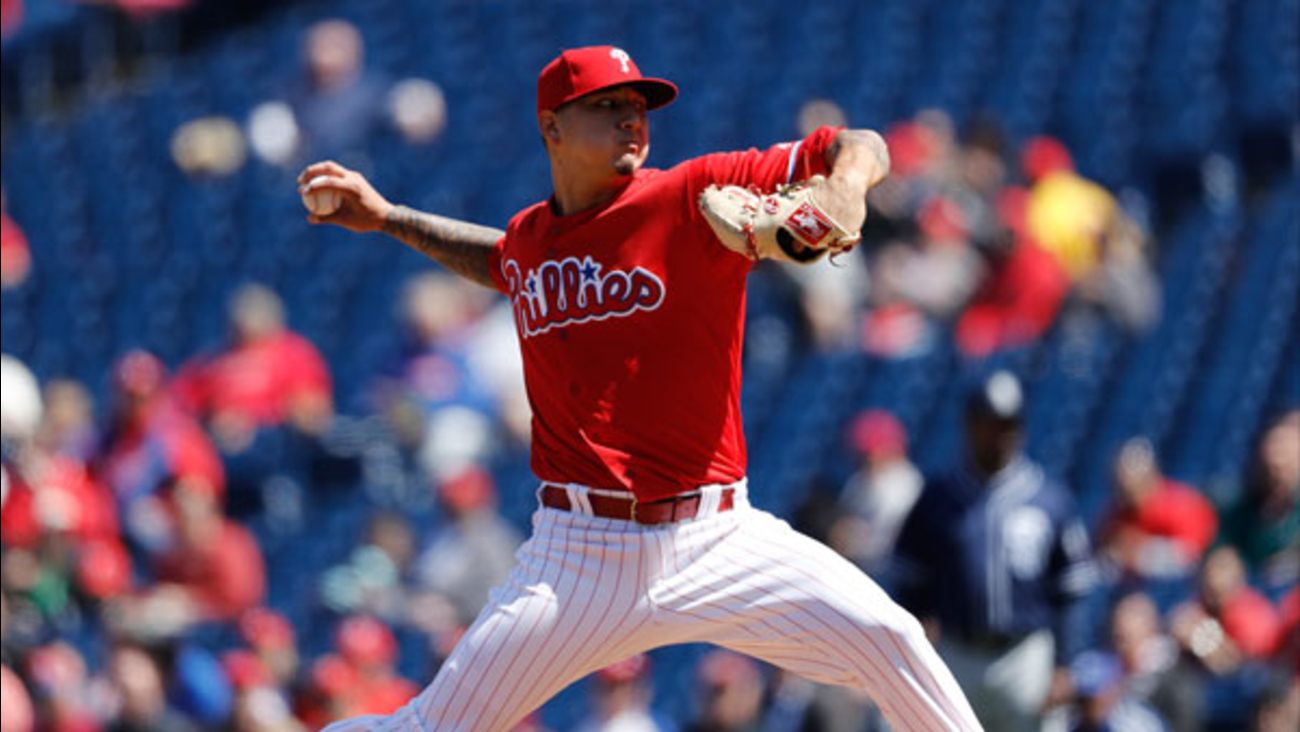 PHILADELPHIA -- Call him Vinny the K.

Vince Velasquez struck out a career-high 16 in a dominant three-hitter, Ryan Howard homered and the Philadelphia Phillies beat the San Diego Padres 3-0 Thursday.

"My emotions were running high," Velasquez said. "That was very fun."

Velasquez (2-0) had no walks and extended his scoreless streak to 15 innings with his first shutout in nine career starts. The 23-year-old right-hander, acquired in the trade that sent former closer Ken Giles to Houston, had nine strikeouts in six innings in a 1-0 win at the New York Mets last Saturday.

The Padres became the first team in major league history to be shut out five times in the first 10 games. They scored one run - with two outs in the ninth on Wednesday - in the last three games.

"We have to be more competitive," Padres manager Andy Green said. "It's time for us to make more mental adjustments in the box."

Wearing short sleeves on a crisp afternoon, Velasquez blew fastballs past overmatched hitters and kept them off-balance with a biting curve. He struck out the side in the eighth, reaching 97 mph a couple times.

Velasquez retired the last 14 batters he faced. He fanned Wil Myers on a 96 mph fastball to end it, threw both arms up in the air and jumped off the mound.

"I kind of reared back and tried to get it," Velasquez said. "It's exciting."

Teammate Andres Blanco dumped a bucket of water on Velasquez after the game.

Howard hit a towering drive out to left-center in the second inning for his third homer. His sacrifice fly made it 2-0 in the sixth.

Washington's Max Scherzer is the only other pitcher since 2000 to toss a shutout with 16 or more strikeouts and zero walks. Scherzer had 17 strikeouts in a no-hitter against the Mets last Oct. 3.

The 25 strikeouts through his first two starts are the most by any Phillies pitcher in the modern era. Jim Bunning had 20 in 1964.

Cliff Lee was Philadelphia's last pitcher to get 16 strikeouts against Atlanta on May 6, 2011.

Velasquez, who told reporters he preferred Vince over Vincent in spring training, also got his first career hit, a single in the third inning.

"The first of many," he joked.

Padres: They fell to 3-7 with their third loss in a row.

The Padres allowed a routine fly ball drop for the fourth straight game when CF Jon Jay lost Peter Bourjos' popup in the sun and it bounced off his glove. It was scored a double.

Phillies reliever Daniel Stumpf was suspended for 80 games by Major League Baseball after testing positive for a banned performance-enhancing substance. The 25-year-old left-hander has a 40.50 ERA in three appearances.

Phillies: 1B Darin Ruf sat out for the third straight game because of a bruised left rotator cuff. Mackanin said he expects Ruf to start against lefty Gio Gonzalez and the Nationals on Sunday.

Padres: RHP James Shields (0-2, 4.85) starts against Arizona Friday night in the opener of a three-game series that kicks off a nine-game homestand. RHP Zack Greinke (0-2, 9.90) goes for the Diamondbacks.

Phillies: RHP Jeremy Hellickson (1-0, 1.54) takes the mound Friday night in the opener of a three-game series against Washington. Joe Ross (1-0, 1.29) starts for the Nationals.