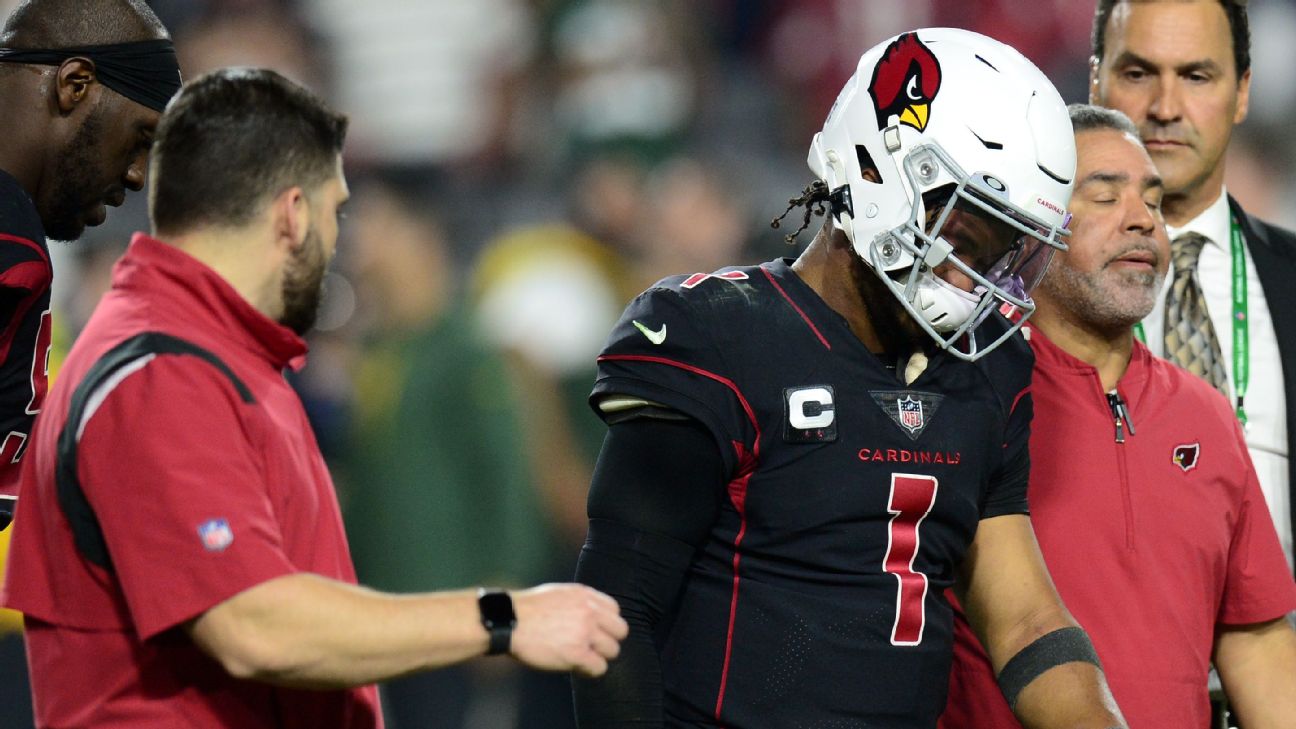 Week 10 of the NFL season has several compelling matchups. The week is headlined by the Seattle Seahawks facing the Green Bay Packers, and both teams could see their quarterbacks return.

Aaron Rodgers is back from the reserve/COVID-19 list after missing a week because of a positive coronavirus test. For Seattle, Russell Wilson is on track to start after being out a month with an injury to the middle finger on his throwing hand.


The Arizona Cardinals will wait until Sunday to make a decision about QB Kyler Murray who missed last week with an ankle injury. Arizona turned to Colt McCoy in Week 9 and cruised past the San Francisco 49ers.


In Thursday's game against the Baltimore Ravens, Miami Dolphins quarterback Jacoby Brissett exited after hurting his knee in the third quarter. He didn't return and Tua Tagovailoa took over, leading Miami to a 22-10 upset win. Additionally, Sam Darnold of the Carolina Panthers was put on injured reserve Friday after suffering a shoulder injury against the New England Patriots last week. He will be sidelined for at least four weeks. The Panthers signed free agent Cam Newton to return to the team.

Our NFL reporters have you covered with the latest developments on big-name players heading into this weekend.

Murray was listed as questionable for Sunday's game against the Panthers with a sprained left ankle. He's improved this week, saying he was significantly better than the previous week. He practiced Friday for the first time in two weeks, a good sign for the Cardinals, but coach Kliff Kingsbury said Murray doesn't have to be 100 percent to play Sunday. He just needs to be able to move enough to protect himself.

Hopkins will be a game-time decision after missing his second straight week of practice. Kliff Kingsbury said Hopkins has been progressing but Arizona is being overly cautious with his soft tissue injury because they don't want it to linger. The Cardinals want Hopkins to be at full strength whenever he does return. -- Josh Weinfuss

Smith will miss his second straight game with an ankle injury. He has now missed multiple games in a season for the sixth straight year. The Cowboys will start Terence Steele at left tackle in Smith's absence. He struggled early in last week's loss to Denver but felt he got better as the game went along. Steele took all of the reps at left tackle this week in practice and he believes the added work will help him this week, as do the coaches. If he struggles, the Cowboys would go with veteran backup Ty Nsekhe. They do not want to move La'el Collins from the right side. -- Todd Archer

With guard Graham Glasgow already on injured reserve for the rest of the season the Broncos will face the Eagles Sunday without three starting offensive linemen given both Bolles and Massie will miss the game. The Broncos found room to work in the run game in the win over Dallas last Sunday with three backups in the offensive front for much of the day and will need that same kind of effort. Toss in the fact offensive coordinator Pat Shurmur is expected to miss the game as well after testing positive for COVID-19 Friday, the Broncos will have to deal with plenty of issues when they have the ball. -- Jeff Legwold

Williams has been ruled out of Sunday's game at Pittsburgh. He was in attendance at the Lions' facility, but didn't practice all week. He was also inactive for the Week 8 loss to Philadelphia before the bye.

Seibert (right hip) has been also been ruled out of Sunday's game. He was in attendance at the Lions' facility for limited practices on Wednesday and Thursday, but didn't practice on Friday before being ruled inactive. -- Eric Woodyard

Rodgers missed last week's game because of a positive COVID-19 test. The reigning MVP participated virtually in everything he could this week, but obviously could not practice. On Saturday, he met the NFL's return-to-play protocols and is likely to play against the Seahawks if the Packers activate him off the COVID list by 4 p.m. ET.-- Rob Demovsky

Coach Urban Meyer said early in the week that he was getting positive information about Robinson being able to play against the Colts, but Robinson did not practice Wednesday, was limited Thursday and didn't participate in a position drill during the open media portion of Friday's practice. It might be a game-day decision like last week, when Robinson tested his foot during pregame warmups before the team made him inactive. Even if Robinson does play, expect Carlos Hyde to get more work than he normally does when Robinson is healthy. -- Michael DiRocco

Kwiatkoski, a former starter and the primary backup at middle linebacker to Denzel Perryman, will be spelled by veteran K.J. Wright, who has started two games on the outside this season. Marquel Lee is also a possibility as a backup. -- Paul Gutierrez

The Vikings will once again be without nose tackle Michael Pierce, whose recovery from an elbow injury sustained weeks ago isn't moving at the speed the Vikings had anticipated. Linebacker Anthony Barr, who has been dealing with a knee injury since training camp, is out this week after playing 98 snaps against Baltimore. Co-defensive Coordinator Adam Zimmer said the team will regularly rest Barr the rest of the season to preserve his knee, which is a chronic issue, but can't get him on the field this week in LA. -- Courtney Cronin

Both top rushers left last Sunday's win over the Panthers in the fourth quarter, and have been in concussion protocol since. The team didn't add a running back to the practice squad, which could reflect their optimism that either, or both, will be cleared in time for Sunday's kickoff. J.J. Taylor and Brandon Bolden are the only other RBs on the roster. -- Mike Reiss

Kamara is not expected to be out long-term, but he will obviously be missed since he is so vital to New Orleans' depleted offense. Kamara leads the team with 105 yards from scrimmage per game, seven touchdowns and 32 receptions (10 more than anyone else on the team for the Saints' 31st-ranked passing offense). The one saving grace is that the Saints traded for a reliable veteran backup in Mark Ingram last month. He should play a huge role Sunday as both a runner and pass-catcher.

Armstead is one of the NFL's best left tackles, so he will be sorely missed - especially since left guard Andrus Peat has also been sidelined since last month with a pectoral injury. However, the Saints have done an admirable job of filling in for various o-line injuries this season (including Armstead missing time earlier this season). Veteran tackle/guard James Hurst should slide back over from left guard to left tackle to replace Armstead, while second-year pro Calvin Throckmorton fills in at guard. -- Mike Triplett

After missing two games, Corey Davis practiced all week and will play Sunday against the Bills. The offense has changed since he last played. Unlike injured QB Zach Wilson, who focused too much on Davis, Mike White distributes the ball evenly. You would think that would translate to fewer targets for Davis, who is averaging seven per game, but the Jets are passing more often with White, so it should be a wash. -- Rich Cimini

Sweat is listed as questionable but did participate in practice this week and was expected to be out of concussion protocol Friday, coach Nick Sirianni said. That increases the chances he'll be available against Denver. Tackle Andre Dillard, meanwhile, suffered a knee injury during Friday's practice and is questionable. -- Tim McManus

Claypool injured his toe in the win against the Bears and didn't practice the two days the Steelers hit the practice field after the Monday night matchup. Claypool's injury is another hit to the wide receiver depth. Look for Cody White to get an increased workload and for Pat Freiermuth to get an even greater target share. -- Brooke Pryor

Armstead is one of many Niners dealing with an injury this week, but he seems to be trending in the wrong direction for Monday night's meeting with the Rams. Armstead was limited in practice on Thursday but did not participate on Friday. For a team that also has defensive backs such as Jimmie Ward, Josh Norman and Dre Kirkpatrick dealing with injury issues, losing Armstead could mean more time for Rams quarterback Matthew Stafford to sit back and find one of his many weapons. -- Nick Wagoner

Russell Wilson is back from the finger injury that sidelined him for three-plus games, but the Seahawks' offense won't quite be at full strength Sunday in Green Bay with Chris Carson out again. Seattle's lead running back returned to practice on Wednesday but will be held out for at least another week because of his neck injury. With Carson missing his fifth straight game, expect Alex Collins to start again with Seattle mixing in Rashaad Penny on early downs and Travis Homer and DeeJay Dallas available as change-of-pace options. -- Brady Henderson

Jones was finally off of the injury report earlier this week but that was short-lived. On Thursday, he seemed to tweak something during an individual period. Jones showed up on the report as a limited participant because of a hamstring injury. The lingering injury has been an ongoing issue for Jones this season. His status is questionable for this week against the Saints.. -- Turron Davenport 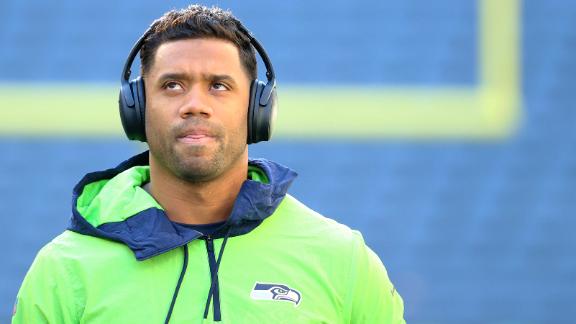