Week 12 NFL overreactions: The Browns will make the playoffs, and the Patriots have issues 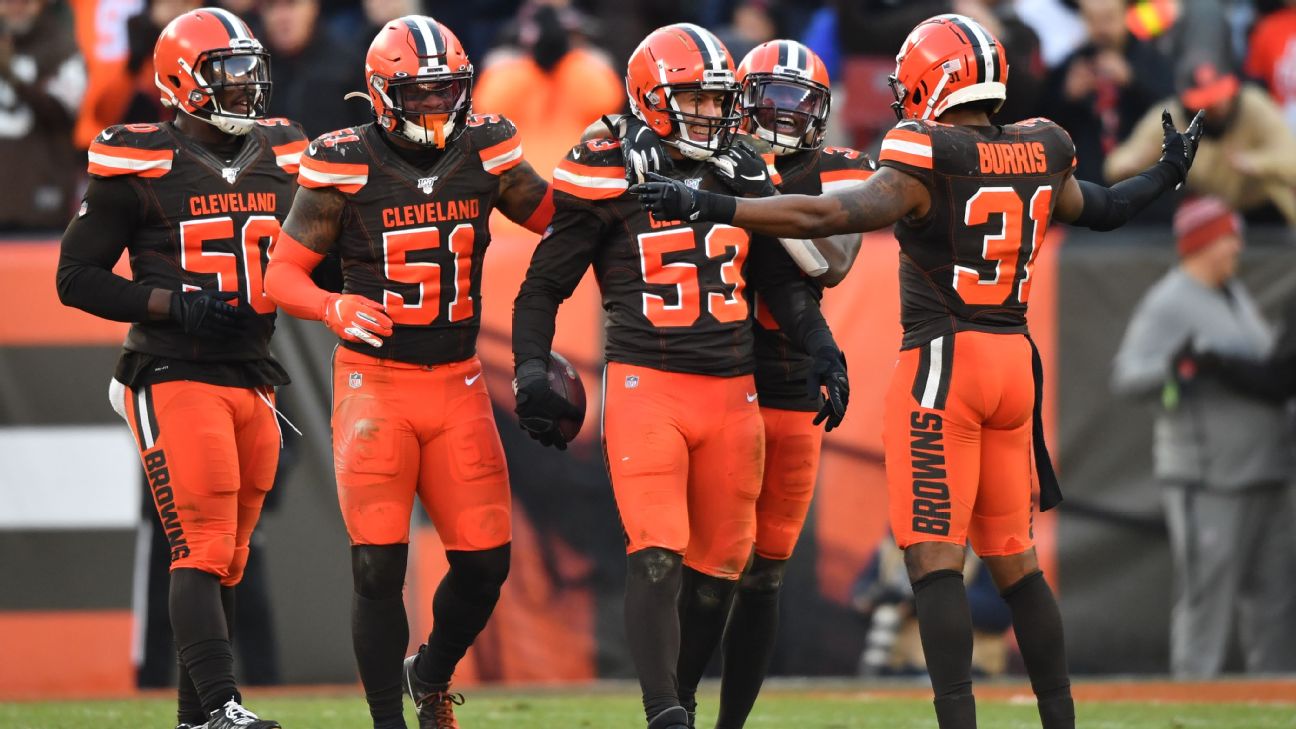 Winning is nice, but if you're the Cleveland Browns you have to be happy a week went by without some sort of fiasco transpiring. The Browns beat the outmanned Miami Dolphins 41-24 on Sunday. No one got ejected. No one got suspended. No one was forced to change cleats at halftime or else the league wouldn't let them play. The head coach didn't take a penalty intentionally to make a field goal attempt harder.

It was, blissfully, a quiet, normal week for the Cleveland football club, and the team ended it 5-6 with five games to go -- still looking as if it has a shot at its first winning season since 2007.

But do the Browns have a shot at even bigger things? That is the question with which we begin this week's edition of Overreaction Monday.

The Browns will make the playoffs

Hey, don't laugh. Cleveland is 5-6, but the AFC looks as if it'll give away that second wild-card spot if you can just spell your name right on the application. Pittsburgh has that 6-seed in the playoff bracket right now, but the Steelers are only 6-5 -- just barely above these plucky, pesky Browns.

Cleveland plays in Pittsburgh next week, and in case you forgot because of the way that game ended in Week 11, the Browns just beat the Steelers a week and a half ago. After that, they have two games left against the checked-out Bengals, one in Arizona and a tough one against the Ravens, although they are one of the two teams that has defeated Baltimore so far this season.

Even if you give Baltimore the win in the rematch, you can get the Browns to 9-7 without too much stretching, and 9-7 should be enough to get into the playoff field, assuming the tiebreakers don't get them. ESPN's Football Power Index (FPI) now gives Cleveland a 25.2% chance to make the playoffs.

Thumping the Dolphins is good. It's what teams are supposed to do. And no, that remaining schedule doesn't look intimidating. But you have to remember that the Myles Garrett suspension means the Browns have to play the rest of this season without their best defensive player, and a damaged pass rush will hurt their chances of putting games away in the fourth quarter -- a skill at which they haven't demonstrated much aptitude as it is.

Look ahead and see them favored in four of their remaining five games, fine. But I still think there's a strong chance this bunch finds a way to underperform in a big spot or two before it's all over, and loses one or two games it shouldn't lose.

The Patriots' offense has major issues

New England won, again, to improve to 10-1, beating the Cowboys 13-9 in miserable November Foxborough weather. The Pats' defense is a monster, and even though you knowTom Bradyis looking for Julian Edelman on third down, they just keep picking them up.

But they put up 282 yards of total offense Sunday, which means they're averaging 353 for the season, which is a pedestrian number for any team, let alone a team that's 10-1. And yes, the weather was lousy, and Mohamed Sanu and Phillip Dorsett(and Rob Gronkowski) all missed the game, so who besides Edelman is Tommy throwing to? I get it.

But it's the third game in a row and the fourth this season in which the Pats have failed to score 21 points, the fifth in a row in which they've failed to amass 350 yards, and while Sanu and Dorsett might be back at some point ... Gronk looks pretty comfy in that TV studio.

The verdict: NOT AN OVERREACTION. This is what it is, folks. The Patriots are 10-1. Almost every team in the league would trade for their problems. They're positioned, as usual, for one of the top two seeds in the AFC, which means a bye week and home games in Foxborough in January. All good.

But we hold the Patriots to a higher standard. We don't judge them by how they look in November. And it's absolutely fair to wonder whether this offense has what it takes to win in January. Whether it can hit the gas when it needs to, the way it did to keep up with and beat Patrick Mahomes and the Chiefs in the 2018 AFC Championship Game.

Bill Belichick is the greatest coach because he is the greatest problem solver. But even with his defense playing at a championship level, it's foolish to believe there aren't problems for this offense to solve before the postseason arrives.

The Bengals are on the clock for the 2020 NFL draft

The sun rose in the east, there was a new episode of "60 Minutes" and the Bengals lost a football game Sunday. There aren't a lot of things you can take to the bank in the NFL, but the 0-11 Bengals are the surest bet going.

They didn't get crushed or embarrassed or blown out. They simply lost, as they have every single time they've taken the field this season -- this time to a Steelers team that replaced its second-string quarterback with its third-string quarterback during the game due to poor performance.

Cincinnati has a two-game "lead" over Miami, Washington and the Giants in the race for the first pick in April's draft with only five games left. The Bengals' chances of being the first team whose name Roger Goodell calls on the final weekend of April are spiraling upward by the week. Remember, the tiebreaker for draft order is not head-to-head record -- it's based on strength of schedule. So even beating the Dolphins wouldn't necessarily kill Cincinnati's chances.

The verdict: NOT AN OVERREACTION. The Bengals are FPI underdogs in each of their remaining five games. And sure, they're only projected to lose by a point to the Jets next week and the Dolphins in Week 16, but let's get real here. The Jets are playing lights-out defense, and the Dolphins are feisty, man. They put up 24 points in Sunday's loss to Cleveland and almost found their way back in it. Miami isn't capable of winning most weeks, but the Dolphins seem interested in winning.

I do not think we can say the same for the crew in Cincinnati at the moment. The Bengals are going with rookie Ryan Finley the rest of the way, and the main reason is so they know whether they need to take a quarterback in the draft. The bet here is that they'll be able to take whomever they want.

The Eagles made a mistake extending Carson Wentz's contract

Tough times in Philly right now for one-time Wunderkind Wentz, whose stat line in Sunday's loss to Seattle shows a neat-looking 33-for-45 passing but only 256 yards (so, 5.7 yards per throw), two interceptions and three fumbles, two of which were lost. Daniel Jones saw this box score and thought, "Man, that's a lot of turnovers."

Philly is 5-6 for the season, 3-3 at home, and has been unable to take advantage of the fact that a Cowboys team with superior personnel hasn't run away with the division.

Wentz, who signed a four-year, $128 million contract extension in June, is 2-4 against teams that entered the game with a winning record this season, and 3-8 against such teams over the past two years. He was a combined 9-8 against those teams in 2016-17. When you need to have a big year to get out of the shadow of your former backup, this is not the year you would choose to have.

The verdict: OVERREACTION. First of all, the price on the contract isn't outlandish, when you think about what quarterbacks cost these days and what it would have cost to put the franchise tag on him for a couple of years. You either commit to your guy or you let him go and you take your chances in the QB wilderness. No one wants to be in the QB wilderness, and really who wants to play the year-to-year franchise-tag game with their quarterback? (Lookin' at you, Dan Snyder.)

But second of all, as bad as Wentz was Sunday, he hasn't really been that bad this season, and the circumstances around him are utterly horrendous. He was supposed to have DeSean Jackson as his deep threat and that didn't last one game. He didn't have Alshon Jeffery or Nelson Agholor or Jordan Howard on Sunday. When he has had his receivers, they've had drop issues. The defense was a sieve for the early part of the year.

The Eagles have turned out to be a considerably worse team than we believed they would be. And while Wentz isn't performing up to his contract, it's way too soon to say he wasn't worth it. Give that front office another offseason to repair things around him, and then let's talk. The 2019 Eagles are a system failure, if they turn out to be a failure at all, which they still might not turn out to be.

That bizarre game the Titans won against the Chiefs in Week 10 might have been the start of something. Tennessee came off its bye and dropped 42 points on the Jaguars to improve to 6-5 -- tied with the Colts for second place in the AFC South and one game behind first-place Houston.

We've already established that 6-5 makes a team a wild-card contender in the AFC, but is it possible that the Ryan Tannehill-led Titans could run down the Texans and win the division?

The verdict: NOT AN OVERREACTION. It's absolutely possible. Houston has to play the Patriots next Sunday night, and it won't be favored in that one. So if Tennessee can win in Indianapolis, the Titans would be tied with the Texans. And get this: The Titans and Texans play each other twice in the final three weeks of the season.

Tannehill is locked in, trying to convince the Titans (or someone else!) he's the best choice for them at quarterback for 2020. Derrick Henry's running style, which can best be described as "supercharged bulldozer covered in razor blades" is lethal this time of year.

The two games against Houston mean it's all there in front of the Titans if they want to take it. They're a legit threat in a division that was supposed to be a two-team race between the Texans and Colts. 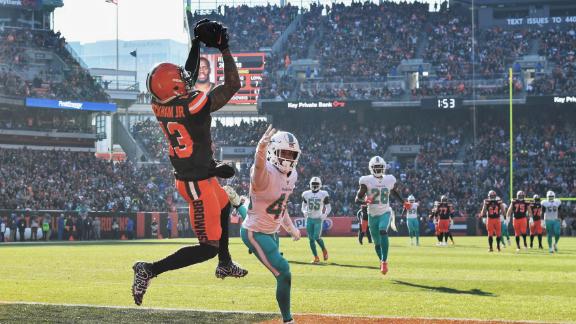 OBJ gets open for a 35-yard TD
Odell Beckham Jr. makes his second touchdown catch of the season, reeling in a 35-yard pass from Baker Mayfield. 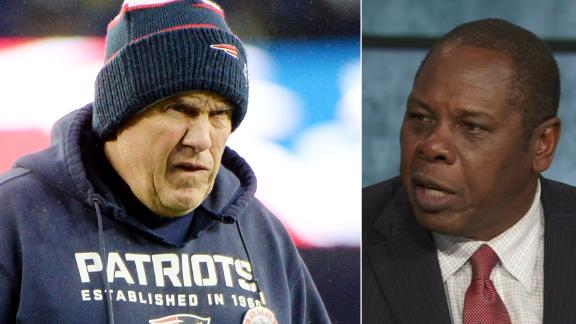 Jackson: Patriots more fundamentally sound than anyone in the NFL
Tom Jackson applauds the Patriots for their ability to prepare for any team in any condition after the Patriots defeat the Cowboys 13-9 in the pouring rain. 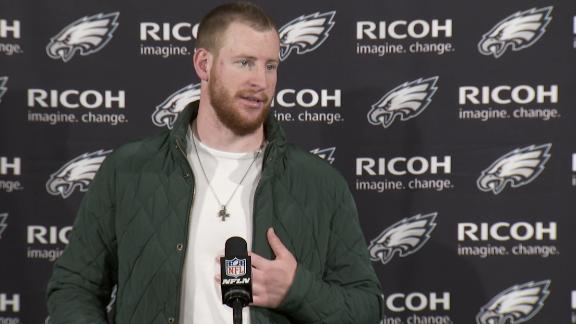 Wentz: 'I have to be better'
Carson Wentz takes the blame for the Eagles' loss to the Seahawks, saying he has to take better care of the ball after turning it over four times.
Report a correction or typo
Related topics:
sportsespncincinnati bengalsfantasy nfltennessee titanscarson wentznfldaily2019 nfl seasondan grazianophiladelphia eaglesnew england patriotscleveland browns
Copyright © 2021 ESPN Internet Ventures. All rights reserved.
More Videos
From CNN Newsource affiliates
TOP STORIES