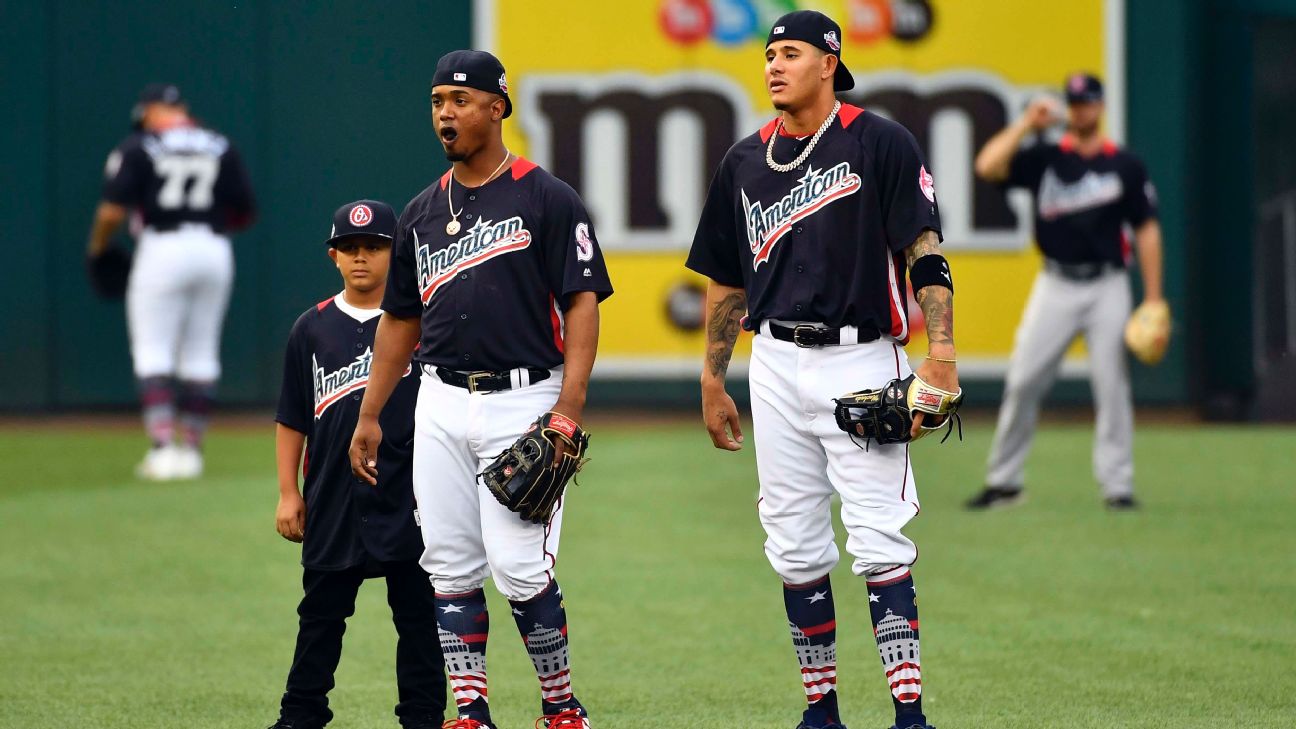 The Mariners-Phillies trade is finally official: The Mariners will send shortstopJean Segura and relievers Juan Nicasio and James Pazos to the Phillies for first baseman Carlos Santana and shortstop J.P. Crawford.

So the Phillies add about $28 million in long-term commitments, but get a proven quality shortstop, two potentially useful relievers and can now moveRhys Hoskinsback to first base after his adventures in left field in 2018. The Mariners get rid of another long-term contract and bet on Crawford to replace Segura while improving their long-term payroll flexibility.

My two immediate reactions to the deal:

(1) In no way should this affect the Phillies' pursuit of Manny Machado.

(2) The trade wasn't just about subtracting Santana, but a sign the Phillies didn't believe Crawford is the long-term answer at shortstop.

The first of those is most important. As USA Today's Bob Nightengale tweeted:

The #Phillies say they're still interested in signing Manny Machado to play third, as well as Bryce Harper in the outfield and Patrick Corbin on the mound. Hey, it's only money, right?

-- Bob Nightengale (@BNightengale) December 3, 2018
While Machado has expressed the desire to stay at shortstop, where he played in 2018 with the Orioles and Dodgers, it's not like he has ruled out a return to third base either. His defense at shortstop was a mixed bag. With the Orioles, he was credited with minus-18 defensive runs saved; but in 49 starts there with the Dodgers he was credited with a plus-5 defensive runs saved, an improvement attributed to better positioning and perhaps simply getting more comfortable playing there (or maybe Dodgers' pitchers simply allowed fewer hard-hit rockets).

Signing Machado to play third base next to Segura would appear to be the perfect storm for Philadelphia. After finishing 80-82, the Phillies knew they had to upgrade their defense. They finished last in the majors with minus-146 DRS -- 46 runs worse than the Blue Jays, the No. 29 team. They ranked below average at every position, and even if the metrics don't perfectly evaluate the Phillies' defense, everyone agrees it was putrid. With Machado at third, they should improve at three positions:

Left field: minus-27 DRS (almost anybody will be better than Hoskins)

On top of that, they should improve offensively at three positions:

Plus: You don't know if you're going to sign Machado, so if Matt Klentak and the front office believed an upgrade at shortstop was necessary, there is value in the urgency of acquiring Segura now -- and still having the option to go after Machado. If Machado playing shortstop becomes a sticking point, you could always move Segura to second base, where he played with the Diamondbacks in 2016, and look to trade César Hernández.

While finding a taker for Santana's contract was a nice bonus to this deal, the fact that the Phillies took on more overall money in the deal is an indication -- at least to me -- that they were hesitant to hand shortstop to Crawford in 2019.

Crawford began the season as the Phillies' starting shortstop and was hitting .188 on April 28, when he landed on the DL with a forearm strain. He returned in June, started eight of 11 games at third base, and then suffered a broken hand when hit by a pitch. He returned in September and ended up hitting .214/.319/.393 in 138 PAs with the Phillies (and .208/.339/.317 in 29 games in the minors). It was mostly a lost season given the injuries, so it's hard to evaluate his progress. It's worth pointing out that the Phillies know him best of all and decided to trade him.

There doesn't appear to be a lot of upside on offense, although if he draws enough walks at least he won't kill the offense with a poor OBP. If he's a .350 OBP guy with 10 home runs and good defense, that's a valuable player. If he's a .300 OBP guy with limited power, there's pressure on the defense to be elite, and that seems to be the overriding issue in evaluating him: Is he an elite defender?

His defense has always been scouted as a strength, with range, good hands and a strong arm. The metrics, however, were not kind to him in 2018, with minus-6 DRS in just 229 innings. Some of that was courtesy of a high error rate -- he made eight errors, all on throws, for a poor .931 fielding percentage. Two of those came trying to complete double plays, one trying to double a runner off first and the other five came on grounders. The curious thing is when Crawford returned in June, Scott Kingery-- who had played two games at shortstop in his minor league career -- continued to get the majority of the starts at shortstop while Crawford played third base. Seems like a strange decision to move the player who is supposed to be the potentially elite defender.

Is that a telling statement on what the Phillies thought of him? Kingery wasn't doing anything at the time, so it's not like they had to keep him in the lineup.

Anyway, Crawford's potential is now Seattle's to develop. The Phillies get a good player in Segura, adding a contact hitter to the top of a lineup that struck out the second-most times in the National League. They can still pursue Machado.