What's behind this new version of Karl-Anthony Towns? 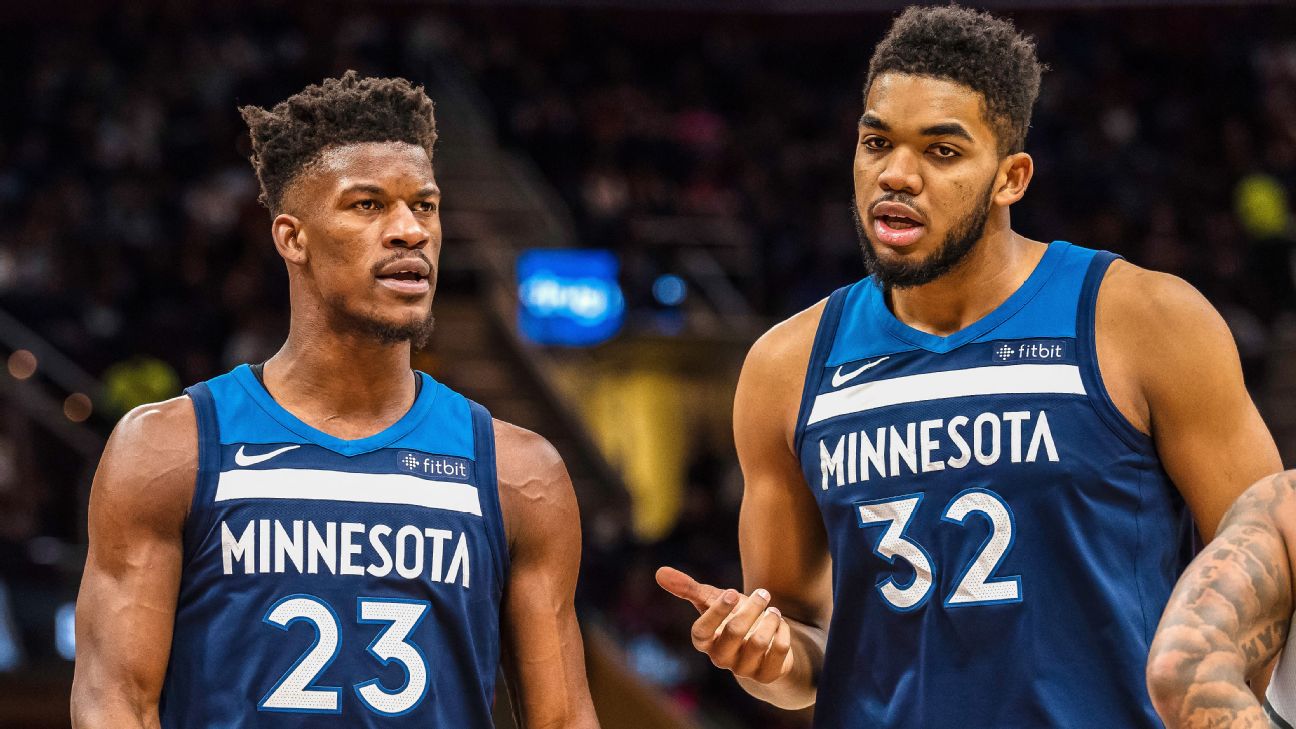 ESPN
By Jackie MacMullan
late November and the Timberwolves franchise was still staggering after Jimmy Butler had finally bludgeoned his way out of Minnesota. Questions persisted regarding the psyche of Karl-Anthony Towns, who, along with Andrew Wiggins, had been verbally eviscerated by Butler in a fiery (and now public) preseason practice.

Butler had just led that same young nucleus to its first playoff appearance in 14 seasons the previous April. But now he was gone in a trail of toxic vapor, leaving Towns and his teammates to hit the reset button.

Amid the turmoil, Towns' play was both underwhelming and puzzling. He oozed both talent and personality, but did he have the disposition to lead a franchise? Could he recover to reclaim the locker room in the wake of Butler's beatdown? John Calipari, his former coach at Kentucky, insisted during a late-November conversation that a new Karl-Anthony Towns was about to emerge.

"You wait," Calipari told ESPN. "Karl's game is going to take off. He can be himself again.

"I bet that environment was so uncomfortable for him. First of all, he and Jimmy are totally different people -- how they were brought up, their likes and dislikes, how they approach competition. You have one guy on this side and one guy on the other side.

"There was a dogfight, and Karl's not one to get into that. So, he stepped back."

Team members say that as Butler's frustration and unhappiness swelled in Minnesota, Towns' locker room presence receded, allowing Butler to dominate the conversation -- and the mechanisms on the court.

"Things happen. There are power struggles all the time in [the NBA]," Calipari said. "If a guy can bully you, he will bully you. And that's what Jimmy did to Karl. C'mon, that's the league."

Some of Calipari's intel on the inner workings of the Timberwolves came from another one of his ex-players -- former Memphis star Derrick Rose, who has run the gamut of NBA experiences, from basking in the limelight of an MVP season in 2011 to being unceremoniously dumped by two franchises last winter.

"Derrick is the one who got Karl through that whole Butler mess," Calipari said.

Rose was who counseled Towns to block out the noise and silence his critics with results on the court.When Towns finished a game having taken just 10 shots, Rose saddled up to his locker and chastised him to increase his production.

"We need more from you," he told Towns bluntly.

Rose was pleasantly surprised to find Towns so responsive.

"He's so mindful of everything I've told him," Rose explains. "So many young guys are stubborn, hard-headed. They know everything. KAT's not like that. He listens."

In December, Towns re-established himself as a redoubtable automatic double-double low-post threat. Consider, per ESPN Stats & Information, that before the Butler trade, Towns averaged just 8.92 post-ups per game and averaged only 0.88 points per direct post-up. After the trade, Towns trailed only Spurs big man LaMarcus Aldridge in post-ups with 12.5 per game, and was averaging 1.8 points per post-up.

His defensive numbers also enjoyed a healthy uptick. With Butler in the Minnesota lineup, opponents shot 51.1 percent against Towns when he was the closest defender. That ranked 118th out of 136 players with at least 100 field goal attempts against. But, since Butler took his talents to the city of Brotherly Love, opponents were shooting just 45.3 percent when Towns was the closest defender. His defensive rating improved 10 points, from 114.6 to 104.6, and his effective field goal percentage jumped from 52.6 percent to 55.8 percent post-Butler.

Still, the turmoil in Minnesota continued. Coach Tom Thibodeau was abruptly fired following a 22-point win over the Lakers on Jan. 6. This time it was Towns' turn to console Rose, who was noticeably shaken by that decision.

, the young Wolves were reunited with the star who pushed his way out. And in one long, tortuous 42-point thrashing, all the goodwill enveloping Towns vanished. Sixers center Joel Embiid took great delight in humiliating him, submitting 32 points and 13 rebounds while Towns mustered just 13 points and three boards.

The unwillingness or inability to match the emotions of the Sixers in such a pivotal game raised questions anew whether Towns and Wiggins possess the mettle to carry a franchise. There is no more damning label in sports than "soft," and that tag continues to dog both players.

Meanwhile, a buoyant Butler, who has never -- ever -- been called that, scored 19 points on 8-of-10 shooting. When he was stopped in the hallway to address Calipari's comments that he bullied Towns, Butler initially replied, "Whatever. That's OK." But, the more he thought about it, he decided it wasn't.

"I don't think bully is a good word," Butler told ESPN. "I tell it how it is. Whenever I was in college, I had [Marquette coach] Buzz Williams to tell me how it was. I didn't have a bunch of McDonald's All Americans like [Calipari] has. So, he can look at it a different way. "

Butler paused, perhaps to consider ending the conversation. But he couldn't -- and didn't.

"He can call me a bully, but when [Calipari] sees me, I'm gonna confront him about it," Butler continued. "If I'm a bully, I'm gonna bully him, too. I'll tell him how I feel, just like I'd tell anyone else.

"I don't care if he's some big head coach. I'm not bullying nobody. I'm just keeping it real. Some of these guys aren't used to it. When you have as much talent as [Karl] has had throughout his life, guys don't keep it real with him. I do."

Back in the Timberwolves locker room, an exasperated Jeff Teague dispelled the notion the horrific Minnesota loss was just another game, declaring, "Them dudes [were] at our heads. Jimmy wanted to beat us. We all know that. Joel Embiid wanted to beat KAT. That ain't a normal game."

A somber Towns patiently addressed the media, as he always does.

"We didn't compete," Towns said. "No edge. We didn't play like the game mattered."

, Derrick Rose believed his career was over. Devastating injuries had not only scarred his physical abilities, they had chipped away at his mental resolve. He arrived in Cleveland in the fall of 2017 hoping to provide valuable veteran insight, but, he says, at times he felt like an apparition. His voice didn't hold weight, particularly as he battled persistent ankle injuries. Rose left the Cavs in mid-November to re-evaluate his career. He talked with mental health counselors, he says, and learned many things about himself, including how to function as an introverted leader.

At most Wolves practices and games, Rose arrives three hours early so he can prep his creaky body, undergoing an arduous routine of hot and cold tub treatments. It was there he encountered Towns, who goes through his own regiment wearing leg compresses to keep his muscles limber. To pass the time during treatment, they listened to music, mused about the pressures of the NBA and compared notes on the mercurial Calipari.

"I told him, 'I don't know how many times I called home wanting to leave Memphis,' Rose said. "With Cal, it's always la familia. If you play under him, it's a connection."

During Butler's tumultuous final days, when everyone was trying to guess what was going on inside KAT's head, Rose was getting a firsthand account in the trainer's room. The big man explained that he was raised to treat everyone with respect. He was still learning how to reconcile that with a ruthless NBA environment that rewards players with an edge. Rose, who had his own differences with Butler while they played together in Chicago, offered some perspective.

"Forcing his will is not KAT's style," Rose says. "There's ways to communicate as a leader. I'm not going to talk to Taj Gibsonthe same way I talk toGorgui [Dieng]. You have to put in your own personal time to learn each individual. I can say, 'I know this guy is a little sensitive to that,' and, 'I know that guy can take it,' so he ends up being the one I can yell at, 'Get your ass over here.'

"I wouldn't say Jimmy is missing that chip ... but maybe Jimmy has room to improve with that. He's young too. I get both sides. You've gotta talk to KAT a little different. Jimmy didn't really do that."

Rose said the dynamic between Towns and Butler was never as outwardly adversarial as it has been portrayed.

"When I got here, I didn't hear anything about how they didn't like each other," Rose says. "I didn't see the tension, but you could feel it a little bit. Then we had a meeting, and that's when I realized how bad it was [between them].

"After they aired it all out, there was actually some relief. I was very surprised by the approach KAT took. It was very mature, in a way. He let it go. He was getting criticism, his averages were low, but he didn't lash back."

Towns says he wishes Butler nothing but the best. Asked if he felt bullied by him, he replies, "That's Cal talking. When we traded Jimmy, we lost a huge part of our team. He's a great player.

"I was doing whatever the team asked me to do before he left, and after he left. That's life, man."

playoffs started today, the Minnesota Timberwolves would be on the outside looking in -- again.

Towns, who recently signed a five-year, $190 million supermax extension, will have to answer to that, along with the enigmatic Wiggins. They scored their big pay day, while Butler still waits. You need look no further than that to decipher his frustration.

"Is Karl too nice?" Butler says. "At times, yes, I do think that, but that's who he is and that's who he's going to be, and there's no problem with that."

It's no longer Butler's issue anyway. He has his own problems meshing in a Sixers locker room overflowing with strong, opinionated personalities. As one member of the Sixers organization noted, "If you want to get paid, try keeping quiet."

Meanwhile, halfway across the country, Towns must figure out how he can lead more effectively, even if it means venturing outside his comfort zone.

"I like being positive," Towns says. "If you speak positively, you get positivity back. I got a lot of alpha dog in me, but I think negativity speaks too loudly."

Here's what Derrick Rose knows from experience about negativity: Whether you're an agitator like Jimmy Butler or a diplomat like Karl-Anthony Towns, you better win.

Do that, and you can lead any way you want. 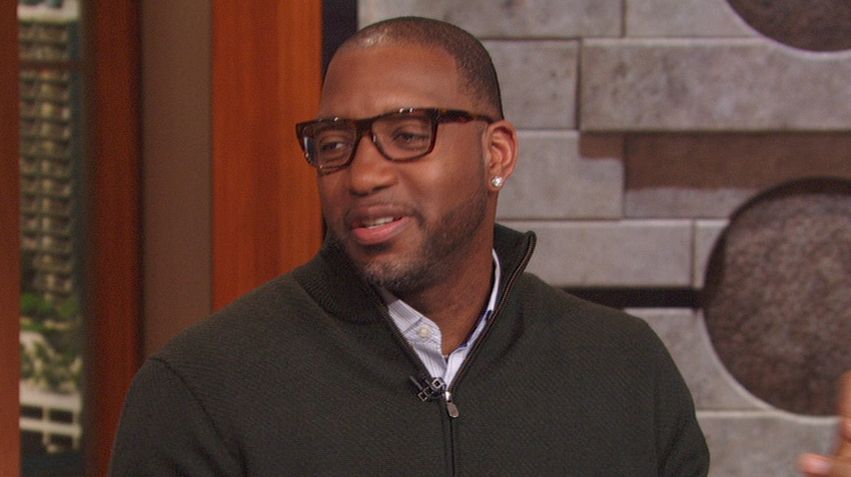