Which player had the best sneakers in the NBA during Week 10? 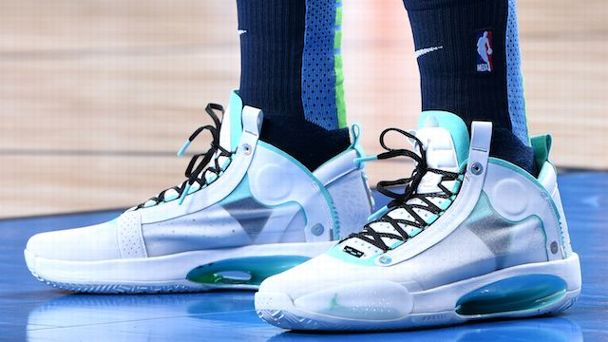 As the regular season continued after an entertaining slate of Christmas Day games, all eyes were on Luka Doncic and his return to the court Thursday. Not only was Doncic returning after a four-game hiatus for an injured right ankle, he was also officially debuting as the newest member of Jordan Brand, after finalizing a shoe deal with Michael Jordan's Nike Inc. subsidiary over the weekend.

"It is exciting to join such a talented roster and being given the privilege of defining the next generation of the Jordan Brand," he said. "Michael Jordan was a hero of mine growing up, so being able to represent this iconic brand, especially as a kid from Slovenia, is an honor."

After wearing the Jumpman Diamond Low for a trio of games throughout his sneaker free agency, Doncic laced up the brand's newest annual pinnacle game shoe, the Air Jordan 34. The white and jade colorway was originally created in tandem with Chinese Basketball Association star guard Guo Ailun, the first Chinese endorser for the company.

As part of the brand's UNITE campaign, Doncic is helping to highlight Jordan Brand's new focus on adding more international flavor to its stable of athletes, joining Guo and Japanese-born Rui Hachimura of the Washington Wizards as featured faces of the company.

"[Doncic] rounds out a roster of incredible new talent united to represent Jordan Brand for the next generation," said Jordan.

With yet another triple-double, Doncic helped the Dallas Maverickscapture a 141-121 win over the Golden State Warriors on Saturday in his second game since his return, improving the Mavs' record to 21-10 (fourth in the West).

"Luka is a phenomenal player, and at such a young age. He's demonstrating skill it takes many guys years to develop," Jordan said. "It will be incredible to watch him continue to advance in the league."

Doncic is expected to begin working through player exclusive colorway concepts with the brand, with his custom-made pairs hoping to arrive by February, as he and the Mavericks continue to make a playoff push this spring for the first time in four seasons.

"He is an undeniable talent, and he's already demonstrated a fearlessness in the clutch that we prize in the Jordan Brand family," added Craig Williams, Jordan Brand president.

While Luka may be the newest addition to the Jordan Brand team, the company's other prized signing this year, New Orleans Pelicans rookie Zion Williamson, appears to be inching closer toward his own debut. Though an exact timetable for his return hasn't been set, Williamson continued to progress in the stages of his rehab by taking part in a light pregame workout at the Smoothie King Center. Just as he was leaving the court and stopping to sign autographs, a young fan caught his eye with a customized pair of the Jordan Retro 4 pulled right off his feet.

With an added Pelicans logo patch in place of the standard Jumpman logo along the tongue, the navy, red and gold colorway also featured a No. 1 jersey-donning caricature of Williamson on the heel for added detail.

"You wanna trade 'em?" the kid asked on a whim.

"I'll trade you one," smiled Williamson, before bending down to unlace his left sneaker.

With one Zion-signed Air Jordan 34 PE in hand, the boy may have gone home without a full pair of shoes, though it's a trade he likely won't second guess.

As players around the league broke out planned pairs and themed colorways of special-edition Christmas kicks, there were still a few surprises in store.

All year long, Boston Celtics power forward Jayson Tatum has worn a variety of Air Jordan 34 colorways, none more festive and eye catching than his wrapping paper-inspired pair for Christmas morning. While Jordan-sponsored athletes will often stick to their beloved Retro favorites or a rotation of current team models, the brand's newest annual shoe is seeing adoption all over, making it the most worn annual Air Jordan in years.

"Coming into the 34, we did have that discussion about taking back the courts," said designer Tate Kuerbis. "That was No. 1: Let's take back the courts, and make it the best playing shoe we've ever had."

For the Denver Nuggets' first Christmas game in seven years, point guard Jamal Murray looked to add a little effort to his footwear with a customized pair of the Adidas Pro Model 2G Retro. The artwork along each collar depicted Santa Claus mimicking Murray's post-3-pointer bow and arrow celebration, making for one of the more creative customs spotted on Christmas.

Philadelphia 76ers small forward Tobias Harris broke out two of the most iconic Christmas-themed kicks, wearing both the "Grinch" Zoom Kobe 6 and the equally loud Kobe 7 in purple cheetah and neon, making the most of his very first time playing on the holiday stage.

After breaking out an insanely rare pair of the "Stewie Griffin" Nike LeBron 6 -- less than 10 pairs made, valued at around $15,000 each -- and debuting his first player-exclusive sneaker last winter, Houston Rockets power forward PJ Tucker was the first to admit that upping the ante this Christmas would be a tall task.

"Literally impossible to beat last year," Tucker texted in the days beforehand. "Nothing I can do to recreate that!"

Still, his trio of pairs for the 25th perfectly captured what has made Tucker such an ever-present figure in the sneaker community over the years. He kicked off the game in a Size 14 holiday-hued green pair of the "Wahlburger" Jordan Retro 4, an extremely limited edition made for Mark Wahlberg's friends and family to celebrate the success of their nationwide fast food chain. (A Size 13 was recently listed online for $13,500, if you're a fan.)

Lastly, as he has on nearly 20 occasions this season, Tucker closed the game out in a loud neon colorway of his trusted Kobe 4 Protro. The rotation encapsulated Tucker's love for the exclusive, his ongoing push to highlight Durant's "KD" sneaker line whenever possible, and his penchant for performance pairs for the home stretch of games.