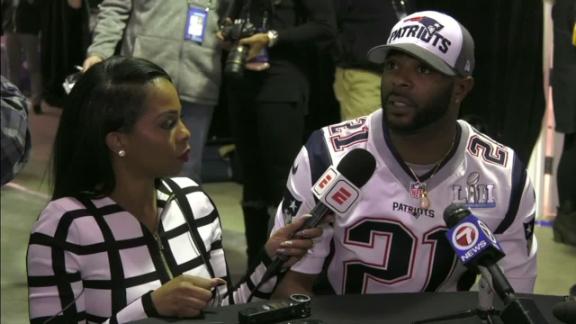 This story appeared in ESPN The Magazine's Feb. 5 State of the Black Athlete Issue. Subscribe today!

THE PATRIOTS' DYNASTY began with a yawn. In 2002, a few hours before kickoff at Super Bowl XXXVI in New Orleans,Tom Bradywandered off inside the Superdome and found a quiet, isolated area, where the Patriots quarterback nodded off for perhaps the most legendary nap in sports history. Out cold for almost two hours, Brady barely woke up in time for warm-ups before rallying to beat the Rams 20-17 and claim the first of New England's five Lombardi trophies.

Since then, the Patriots have continued to sleep their way to the top. Naps are now a regular part of the game-day schedule in New England, where the team has installed sleep rooms at its practice facilities so players can catch up on their Z's. Brady has become an outspoken advocate of sleep science, retiring by 9 sharp each night to ensure a full nine hours of restorative slumber.

But teams all over the NFL -- including each championship game participant -- are aware of recent studies showing that even a small increase in REM sleep can boost an athlete's motor skills by 16 percent and quicken reaction time by half a second.

That's why when the Vikings -- including veteran cornerbackTerence Newman, a self-described Hall of Fame nap taker -- played in London earlier this season, they took sleep specialists along for the trip to help players adjust to the time change. The Jaguars were one of the first NFL teams to work with Rise Science, a company that specializes in monitoring and maximizing players' sleep patterns. And Eagles coach Doug Pederson has kept many of the sports science initiatives that former coach Chip Kelly introduced in 2013, including sleep study.

Philadelphia safetyMalcolm Jenkinsis such a believer that when he was looking for a place for his foundation to bring local kids to learn about the value of a good night's sleep, he came up with a familiar spot: the Eagles' practice facility.

"I thought this would be an awesome experience to bring the kids here and talk to them about sports science and what goes into practice, training, recovery and rest," Jenkins says.

But even the most advanced teams and players struggle with the interminable two-week run-up to the Super Bowl and then the game itself, which has become the most grueling, logistically challenging and anxiety-ridden day in sports. For New England, and other Super Bowl-savvy teams, a tranquil approach can lead to a huge competitive edge.

"That's a definite advantage for guys who have played in multiple Super Bowls, knowing how to handle the rhythms of those big games," says Trent Dilfer, the Ravens' quarterback in Super Bowl XXXV. "For first-timers, it's all new and it's all exhausting."

Just ask the Falcons. Fatigue was, perhaps, the biggest contributing factor behind their epic collapse in last year's Super Bowl. Atlanta's defense was on the field for 93 snaps, nearly one and a half games' worth of plays, with most of them in the physically taxing man coverage. Falcons coach Dan Quinn says that by the fourth quarter, his players were so gassed they didn't even have enough energy to talk to one another on the sideline as the well-rested Patriots roared back from a 28-3 deficit. According to Pro Football Focus, the Falcons' pass rush went from generating QB pressure on 60 percent of all pass plays in the first quarter to just 12.9 percent on Brady for the fourth quarter and overtime.

Last year, Brady alone had more Super Bowl experience (six games) than the entire Falcons roster. NFL players tend to be extreme creatures of habit, and knowing how to handle the worldwide stage, myriad media obligations and endless requests from friends and family is oftentimes half the battle in winning a Super Bowl. Steelers quarterbackBen Roethlisbergertold NFL.com after Super Bowl XLV in Arlington, Texas: "There were helicopters hovering, people everywhere, it's just ridiculous. You've got to try to take it all in, but don't let it get too big. People get overwhelmed and they get too nervous, and they forget to treat it like a regular game."

Even if you survive the two weeks of hype, though, the Super Bowl's game-day schedule makes it nearly impossible to treat it like a regular game. By the time you factor in delays thanks to traffic, security, extended pregame and halftime festivities and the astronomical number of commercial breaks during the broadcast, most Super Bowl game days run two to three hours longer than they do for regular-season games. For players, Super Bowl Sunday officially begins more than four hours before kickoff with a meal at the team hotel. After working their entire lives to reach the Super Bowl, and surviving two hectic weeks of hype, most players jump on the first team bus to the stadium and arrive around 3 p.m. (for a 6:30 kickoff) with a whopping 3 hours to kill.

Early arrival at the Super Bowl throws off carefully choreographed pregame preparations regarding food intake, hydration, injury rehab, warm-ups and even pain management. For example, a pregame shot of Toradol that lasts for an entire regular-season game might begin to wear off as early as the third quarter of the Super Bowl. To make matters worse, players' arrival on Super Bowl Sunday coincides with a dip in energy and focus due to the body's natural circadian rhythm.

Which is why sleep expert Dr. Jim Maas, a former Cornell professor who coined the phrase "power nap" and has worked with various NFL teams, suggests that the first thing players should do after arriving at the Super Bowl is take a 90-minute snooze. While Brady often gets credit for popularizing the strategic pre-Super Bowl snooze, he was actually following in the footsteps of former Titans quarterback Steve McNair, who dozed off in the dark, damp Tennessee shower room on a bed of towels before Super Bowl XXXIV.

Ninety minutes is enough for a full restorative REM cycle that, Maas says, will actually help imprint the game plan into the motor cortex section of the brain. Here's where things get tricky, though. If players can't go the full 90 minutes, they have to be extremely careful not to take more than a 20-minute catnap. Falling into an uncompleted or interrupted deep-sleep stage floods the brain with chemicals that Maas says will leave players "groggy walking zombies on the field."

For those who don't nap, there are all sorts of other pitfalls to avoid. Feeling antsy before Super Bowl XL, Seattle quarterback Matt Hasselbeck wandered onto the field three hours before kickoff in Detroit to loosen up his arm, only to get interrupted and distracted by many of his childhood heroes, including Boomer Esiason.

"The conversations were amazing, but I was getting nothing done, so I cut it short," says Hasselbeck, who as a kid had a Bengals jersey autographed by Esiason. "At the Super Bowl you get caught between, 'Do I soak it up or do I maintain laser focus?' But it doesn't really matter, because after two weeks of buildup, it's all pretty much an emotional drain."

At the Super Bowl, players must be off the field a full 40 minutes before kickoff for player introductions, a rendition of "America the Beautiful," the national anthem, the military flyover, the coin toss and what feels like a never-ending stream of beer commercials.

"You stop sweating and you're just standing there for so long with so many distractions," Dilfer says. "You can just feel your energy level crashing down."

Most Ravens fans don't know that after a sloppy first series, Dilfer was still in a fog when Baltimore fullback Sam Gash charged into the huddle, lifted the quarterback off the ground by his chest plate, shook him like a rag doll and screamed in his face mask, "Let's go, wake up!"

Dilfer snapped back to life and was finally feeling like himself just in time to deal with the worst Super Bowl pothole of all: the extended halftime. Regular-season halftimes run as short as 12 minutes. But in Tampa, the awesomely awful combo of Aerosmith and 'N Sync ran almost three times as long. When Dilfer tried to stand up to head back to the field, his hip flexor had completely locked up, and he needed a Vicodin just to get out of his locker stall.

The extended halftime is so disruptive to teams' routines that the Patriots now practice for it. In 2012, on the Wednesday before facing the Giants in Super Bowl XLVI, coach Bill Belichick abruptly halted practice and ordered his players to return to their locker room for 30 minutes. He spared them a mashup of Madonna, the halftime performer that year, but he did make them listen to a faux pep talk and a constant reminder for players to get off their feet.

"It's not like taking a break and coming out in the second half," Belichick said. "The Super Bowl is like playing a game, stopping and then playing a second game."

Reminding his players about Brady's legendary nap, Seahawks coach Mike Holmgren ordered his entire team to stay off their feet at halftime of Super Bowl XL against the Steelers. Trying his best to rest, Hasselbeck peeked out from his locker and saw Seahawks defensive lineman Craig Terrill, a die-hard Rolling Stones fan, hovering by the exit trying to sneak a listen.

"I've been searching for a reason we didn't play our best in that Super Bowl," Hasselbeck says. "Maybe we can put some of the blame on the Rolling Stones."

Then maybe the ultimate takeaway is that when it comes to surviving the Super Bowl, the longest, craziest day in sports, the Stones had it wrong in their famous song: Time is actually never on your side.