With Kevin Love out, Cavs go to smaller lineup with LeBron James at power forward 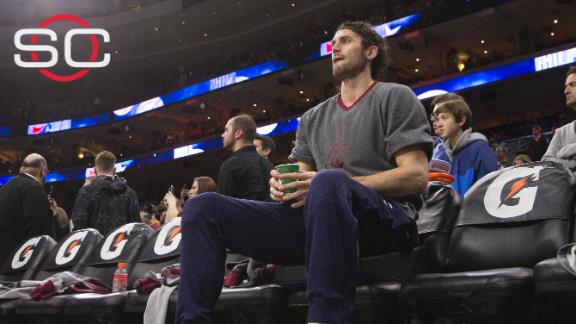 CLEVELAND -- Despite his efforts to convince team officials that he's well enough to play, Cavaliers forward Kevin Love was informed that he is not medically cleared to participate in Wednesday's Game 3 of the NBA Finals.

One source close to the situation told ESPN that Love was "really frustrated" by the hard-line stance the Cavs are taking to keep him off the floor Wednesday night as he recovers from a concussion suffered in Game 2.

With Love out, the Cavaliers moved LeBron James to the power forward position and inserted Richard Jefferson into the starting lineup.

Despite Lue's hope that going small will yield a more positive result, Cleveland is minus-49 when going to a small lineup in this series, according to ESPN Stats & Information research.

For Jefferson, it's his first start in an NBA Finals game since June 15, 2003, when he was a member of the New Jersey Nets. In that game, a series-ending loss to the Spurs, Steve Kerr played nine minutes off the San Antonio bench in what was the final game of his playing career.

"Just like his physicality, able to catch the ball, straight-line drive, moves well without the basketball when we get stagnant," Lue said of Jefferson. "Just going off his last game in Game 2, I thought he really played well, and that's who we decided to go with."

Jefferson's start was just his sixth this season and comes despite Love attempting to get back in the lineup.

Sources told ESPN that Love had been aggressively lobbying the Cavaliers to clear him to return for Cleveland's pivotal home game Wednesday night, in which the Eastern Conference champions will be trying to cut into theGolden State Warriors' 2-0 series lead.

But Love was told that he would not be permitted to return to the lineup after two days of evaluation in the wake of the inadvertent shot to the back of the head he took from Warriors forward Harrison Barnes on Sunday night in Oakland, California.

Love went through a portion of a shootaround Wednesday morning and is officially listed by the Cavaliers as questionable for Game 3. But sources said he has been informed that Friday's Game 4 is the earliest he'll be considered for a return.