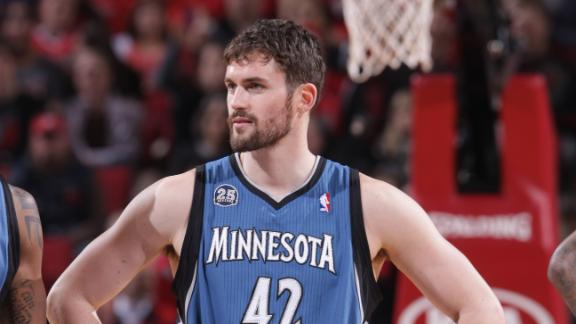 The Minnesota Timberwolves have reached an agreement in principle to trade Kevin Love to the Cleveland Cavaliers for No. 1 overall pick Andrew Wiggins, 2013 No. 1 overall pick Anthony Bennett and a protected 2015 first-round draft pick, multiple media outlets reported Thursday.

The trade cannot be finalized until Aug. 23 because draft picks cannot be traded until 30 days after signing a new contract. Wiggins signed a rookie contract on July 24.

According to Yahoo! Sports, which reported an agreement in principle between the teams earlier Thursday, Cleveland has committed to make the trade with a "firm agreement" that Love will re-sign with the Cavs next summer for five years and $120 million-plus after opting out of his contract. But such an arrangement would be a violation of NBA rules.

Sources confirmed to ESPN.com's Marc Stein on Thursday that the Cavs and Love can make no such arrangements about the future, even verbally, without violating salary-cap circumvention rules in the league's collective bargaining agreement. Love has made it widely known that he intends to opt out of his contract at season's end, wherever he is, to become a free agent in July 2015, but the circumvention rules state that any discussions between the Cavs and Love regarding any future contract cannot take place until Love becomes a free agent next summer.

ESPN.com has reported numerous times over the past month, since LeBron James committed to re-sign with his home-state Cavs, that Love has let it be known he wants to play alongside James and would be willing to make a long-term commitment to Cleveland as long as James is there. But Cleveland would be making this trade with no such guarantees because James is under contract for only the next two seasons -- with the right to opt out and return to free agency next season -- and because Love is likely to take his cues on the length of his next deal with Cleveland based on what James does.

Sources have told ESPN.com that Love has been highly intrigued by the idea of playing alongside Olympic teammate James on a full-time basis and is not put off by the fact that James' contract with the Cavs spans only two seasons and includes a player option to return to free agency next summer.

The deal also will unite Love, James and Kyrie Irving as a new-look Big Three in Cleveland and give the long-suffering sports town a realistic chance for its first title in 50 years.

NBA Hall of Famer Isiah Thomas reacted to news of the trade agreement on Twitter by crediting James for his influence in getting Love to Cleveland.

- Isiah Thomas (@iamisiahthomas) August 7, 2014James is the best player in the NBA, Irving is an All-Star and the 25-year-old Love is coming off his best season, one in which he averaged 26.1 points, 12.5 rebounds and 4.4 assists. He is the top "stretch 4" -- a power forward who can rebound and shoot 3-pointers -- in the game, but all of his offensive gifts haven't been enough to get the Timberwolves into the playoffs in the rugged Western Conference.

Love can opt out of his contract next summer, and the three-time All-Star made it clear to the Timberwolves that he was looking to join a contender after missing the postseason for six seasons in Minnesota.

The Cavaliers talked with the Timberwolves before the draft about bringing Love in, but his camp made it clear to owner Dan Gilbert and the Cavs' front office that he wasn't interested in signing a long-term contract with a young and unproven team that had not made the playoffs since 2010.

Then James left Miami for home, changing everything for Love, who teamed up with the four-time MVP to win the gold medal at the London Olympics.

Wiggins has been working out at a non-Cavaliers location, and his representatives have already begun researching possible endorsement opportunities for him in Minnesota, a person with knowledge of those pursuits told The Associated Press. That person spoke to The AP on condition of anonymity because the deals have not been completed.

Love withdrew from his planned participation with Team USA at the FIBA World Cup of Basketball to avoid an injury that could derail the deal.

Wiggins, when asked Sunday about the uncertainty over his future, told ESPN that he wants to play where he's wanted. The Cavs signed Wiggins to his rookie contract, which averages about $5.5 million annually.

"I just want to play for a team that wants me. So whichever team wants me I'll play for," he told ESPN's "SportsCenter" from Tarrytown, New York, where he was taking part in a photo shoot for Panini trading cards.

Although the Cavs would prefer to keep Wiggins, their interest in Love is understandable given how well the big man's combination of elite rebounding, passing and long-range shooting ability could complement James' game. With Love in addition to James and point guard Kyrie Irving, Cleveland would rank as an undeniable favorite to win the Eastern Conference, something the Cavs managed only once in James' initial seven-season stint with his home-state franchise.

ESPN.com's Marc Stein and The Associated Press contributed to this report.

Reports: Kevin Love To Be Traded To Cavaliers
Brian Windhorst breaks down the latest on Kevin Love, who reportedly will be traded to the Timberwolves for Andrew Wiggins, Anthony Bennett and a protected 2015 first-round draft pick.