Statues of Christopher Columbus vandalized amid controversy over the holiday 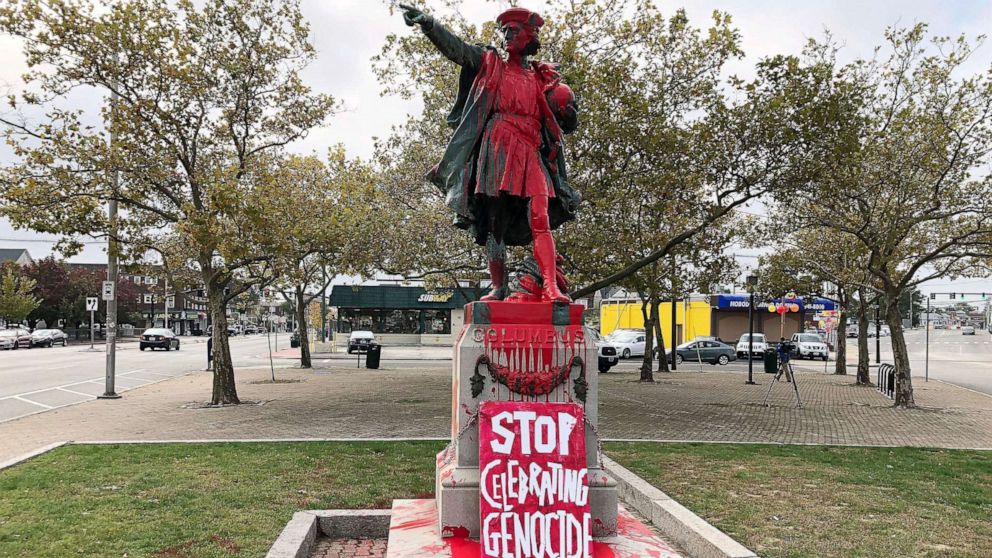 Statues of Christopher Columbus were vandalized amid continued calls to change the name of the federal holiday honoring the Italian explorer.

Red paint, along with messages about genocide, were sprayed on landmarks in both San Francisco and Providence, Rhode Island, on Sunday.

A sign that read "Stop celebrating genocide" was placed at the foot of the Columbus statue, located in the Elmwood neighborhood of Providence, ABC Providence affiliate WLNE reported. The statue was covered with red paint.

The statue was also vandalized in 2010 and 2017, according to the station.

In San Francisco, a Columbus statue near Coit Tower was also sprayed with red paint. Graffiti at the bottom read, "Destroy all monuments of genocide and kill all colonizers." Supervisors in the city voted to change the holiday to Indigenous Peoples Day in January 2018, ABC San Francisco station KGO reported.

Columbus Day observes the anniversary of the explorer's arrival on what is now the Bahamas on Oct. 12, 1492. Many Italian Americans honor their heritage on Columbus Day with parades and festivals.

At least eight states and 130 cities have legally changed the holiday to Indigenous Peoples Day, including Wisconsin, where Gov. Tony Evers signed an executive order on Oct. 7.

Other states are attempting to find a middle ground. Earlier this year, Oklahoma Gov. Kevin Sitt signed legislation recognizing the day as both Native Americans Day and Columbus Day.