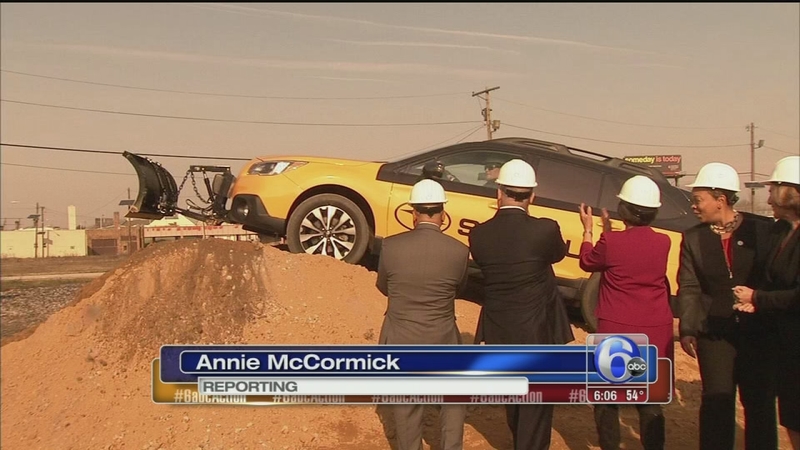 CAMDEN, N.J. (WPVI) -- The City of Camden's economy is getting a big boost.

Groundbreaking took place Wednesday for the brand-new headquarters for Subaru of America on Admiral Wilson Boulevard. The facility is expected to bring more jobs to the city.

The site will house an estimated 700 employees, and is expected to be ready in late 2017. It is located next to Campbell Soup's headquarters and expected to be part of a larger corporate office park.

"They're keeping to their roots, which quite frankly started in Pennsauken almost 50 years ago. And then they moved from one town to another," said Rep. Donald Norcross (NJ-01).

An archaic state accounting glitch almost made the corporation look elsewhere for a better deal. Now they are staying after working with the state.

"We've grown at a compound annual rate of about 17 percent a year. So this year, for example, we're adding 70 new positions at our corporate headquarters building. So, our intention as we move into the headquarters building would be to add perhaps 100 to 120 new positions," said Thomas Doll, Subaru of America's President and Chief Operating Officer.

Subaru will receive $118 million in tax credits during a period of ten years. Through the New Jersey Economic Development Authority, Camden has gained the 76ers and Holtec, making the state competitive with other states offering similar incentives.

Critics argue the new plan could have been better suited to help Camden residents, like requiring a quota of employees to reside or come from the city. The company says they are working on expanding public transportation to the site - for now it's about a mile walk.

"For those who call Camden home, there's going to be opportunities for jobs. Subaru has committed to that," said Norcross.

"Because you're going to see so many announcements that we made in 2014 and '15 actually materialize when we'll be cutting ribbons and opening the office doors for many places. The fact that we're creating jobs in Camden and retaining jobs in New Jersey is so critically important to the work that we're doing," said Camden Mayor Dana Redd.