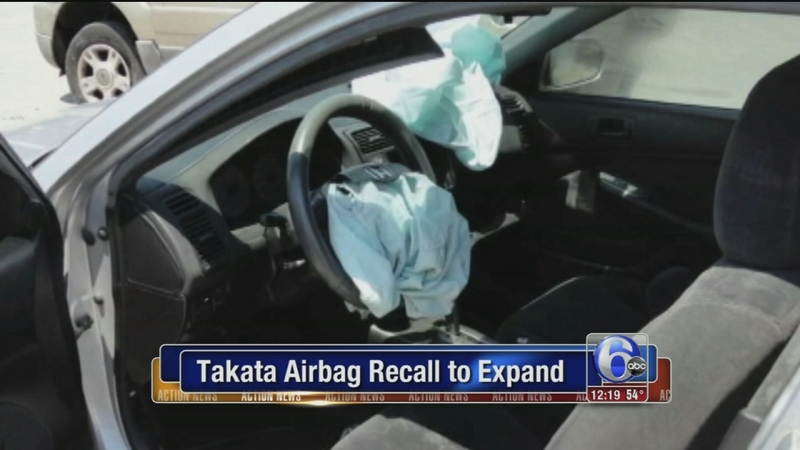 RICHMOND, TX -- Takata has agreed to recall another 35 million to 40 million air bag inflators, a stunning increase that will more than double what already is the largest automotive recall in American history.

The recall expansion would bring to as many as 69 million the total number of inflators to be replaced, a task that will take until the end of 2019 to complete, according to a government news release obtained by The Associated Press.

Takata air bag inflators can explode with too much force and injure people. So far, at least 11 deaths and more than 100 injuries have been reported worldwide from the problem.

Replacing that many inflators will be a daunting task because automakers involved in the current recall of 28.8 million inflators have only been able to fix 28 percent of the cars involved after more than two years. Air bag manufacturers have had trouble ramping up to manufacture enough replacement inflators, and automakers have had trouble finding owners and persuading them to get their cars repaired.

Even without the expansion, it would have taken until the end of 2017 for enough replacement parts to be manufactured, said Scott Upham, CEO of Valient Market Research in Rochester, New York, which tracks air bag sales.

Upham said other makers of air bag inflators such as TRW Automotive, Daicel and Autoliv have agreed to ramp up production even more.

"They're pitching in to the best of their ability, but even with their help, it's going to be very difficult to really ramp up production to cover this," Upham said.

Valient hasn't had time to forecast how long it might take to make millions more inflators, Upham said.

The additional recalls come as authorities in Malaysia investigate two more recent deaths in cars with Takata air bags that ruptured. Honda says the inflators spewed metal fragments in the crashes, but the cause of the deaths has not been determined.

The crashes occurred in April and May. If they were caused by Takata inflators, they would be the 12th and 13th deaths worldwide.