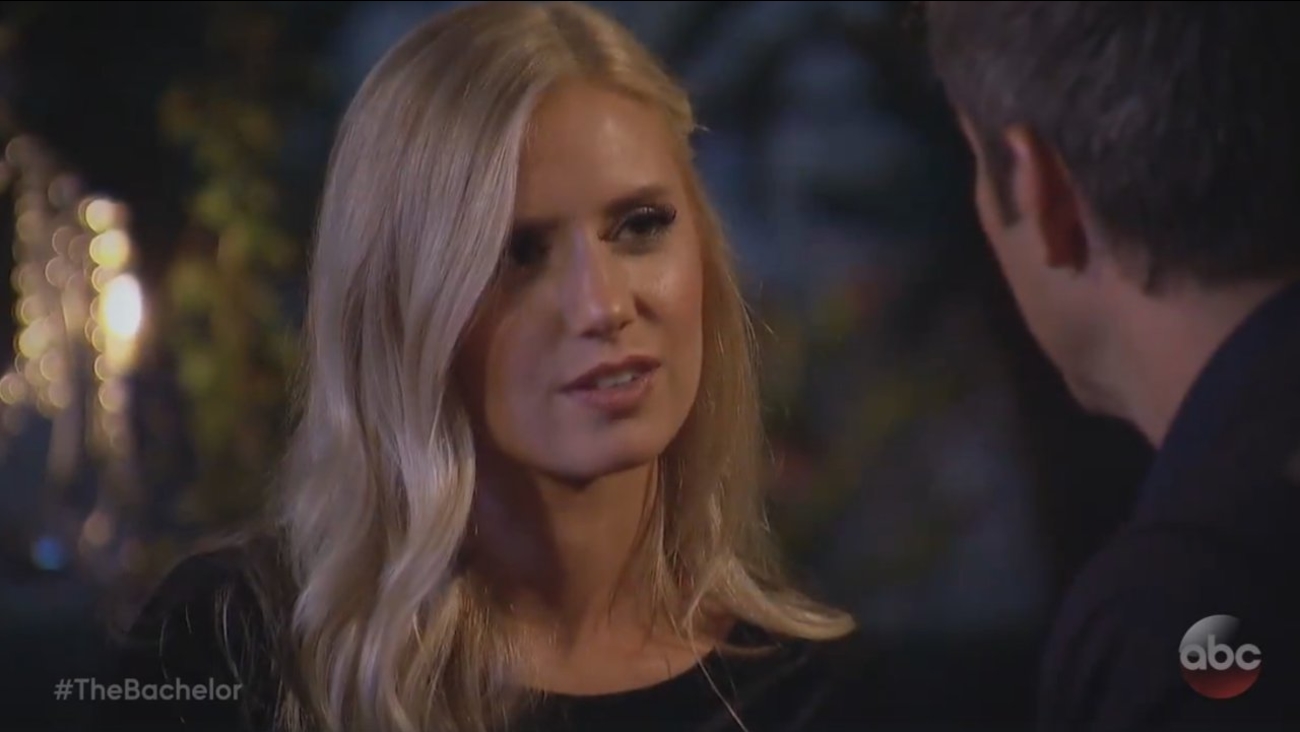 NEW YORK -- How can you not fall in love in Italy? It's a country made for love! The remaining seven women headed to Tuscany where they met up with Chris Harrison who explained the date breakdown. First, there would be no rose ceremony. There would be three one-on-one dates and one group date with a rose on each date up for grabs. The first date card was for Becca and it said, "Let's fall in love under the Tuscan sun." Arie picked Becca up at the hotel and she was a bit nervous, it's her first one-on-one since the very first one-on-one date of the season! They drove off in a cherry red convertible and headed to a little town where they bought a loaf of bread, and tasted some cheese and salami. They brought their purchases to a little park where they sat under a tree and had a bit of a picnic. Arie shared his concerns about how they haven't had much time to connect since the beginning, and Becca tried to calm his concerns and it seemed to do the trick. The passion returned and they shared a kiss. They were soon cozying up and seemed like a couple falling in love.

Jacqueline started to have fears back at the hotel that she wasn't ready to let Arie meet her family. She also wasn't sure if she could visualize him in her real life and how his conversations would go with her family. Kendall told her she needs to talk to Arie about her concerns.


When a future might be THE future. #TheBachelor pic.twitter.com/OPQmyOGVt7

Back on the date, Becca and Arie talked about which family members he would meet and her family sounds pretty cool! He asked her about the last time she brought someone home to meet her family and she said her last boyfriend just kind of met her family here and there. Arie would be the first she "officially" brought home as a big event to meet them. Becca told Arie that she's "falling" for him and that she can see a future with him. Arie grabbed her face and kissed her and said, "That makes me feel happy." Arie said it gives him confidence and he can see a future with her. He gave her the date rose, which she accepted! Arie also told her that he's falling for her too! Wow! Arie will go to her hometown of Minneapolis next week!

Her name is Jacqueline. 😢#TheBachelor pic.twitter.com/6NMFnmeorU

Another date card arrived at the hotel, and this time it was for Lauren! It read, "Let's break down our walls." Jacqueline didn't take the news well that she didn't get the next date, and she went to talk to Arie in his hotel room. She immediately started to drink his wine and told him that part of her is falling for him, but that the other part thinks that she's doesn't have strong enough feelings to take him home. She said she had a moment of doubt on their date, but she ignored it. She thinks that there's not enough of a foundation, and she's worried she could end up married to him in Scottsdale and think, "How did this happen?" He looked visibly shaken and got teared up and told her that she has to listen to her heart. She told him that she's "outrageously attracted" to him and started kissing him. But then went back to the fact that she's not confident in their relationship. Arie told her that he really likes her, and that he didn't want it to be over. Yet he stood up and walked her out. He told her, "You have any regret, you come back to me." Wow. That's serious. He didn't need to say that.

The next day, Arie shook off the breakup and met up with Lauren for their date. He hoped they could build off of the momentum from last week. They bicycled through Lucca, Italy and explored the region. They stopped for gelato and walked in silence AGAIN. It's really kind of ridiculous. They don't seem to have "easy" conversation. They stopped for pizza and Arie asked Lauren if she's ready for a hometown date. Lauren said she needs the date to figure that out. He'd be the first guy she's introducing to her family since her ex-fiance. A ball knocked into them at their table, and they jumped up and started playing soccer with a group of 10-year-old boys. It looked more like Arie playing and Lauren standing there to be honest.

Alone with her thoughts. #TheBachelor pic.twitter.com/b7fShQAP3p

Later, they dressed up and went off to a romantic dinner together. It was a breathtakingly beautiful location. Lauren thanked Arie for picking her for the date and she promised to breakdown her walls. Arie asked her how she's feeling and wanted to know if she's ready for him to meet her family. She kind of dropped a weird bomb and said that she's falling in love with him. Arie stood up and walked away! Lauren started to freak out, and said, that she said too much too soon. She started to tear up at the table. Arie took a walk alone for a bit and thought carefully about what he wanted to do. Arie returned and told Lauren that he's very nervous and he wants so bad to meet her family. He told her that nothing is off with her and that he felt things he hasn't felt in a really long time. He said that he's falling "so deeply in love" with her! What?! That's crazy. Who knew that Arie had those feelings inside?!

Adorable doesn't need a lot of "witty" copy from us. ❤️#TheBachelor pic.twitter.com/Fc5jvYwJU2

The third date card arrived and it was for Seinne! It read, "I'm searching for the one." Seinne and Arie met up with Guilio the truffle hunter and his dogs. They dug up a bunch of fungus and seemed to have a good time. Then, they met up with Guilio's family to have some lunch. It's a bit weird, like he doesn't want to have one-on-one time with her or something. They made some homemade pasta and pizza and Arie made his into the shape of a heart. They asked them if they were in love and it seems that they aren't quite yet. They sat and ate pasta with truffles of course! They kissed as the family cheered them on and a beautiful lunch was had by all.
During a private dinner, Seinne and Arie talked about their relationship and whether they could envision a future together. As they tried to talk about things, the bell tolled at a tower and it seemed awkward. They stopped and then when they continued their talk it seemed like Arie's a bit unsure of what he wants to do. Seinne said she wasn't ready to not have him in her life, yet Arie said that they weren't far enough along in the process for him to give her the rose. He said it wasn't anything she did, but he's following his heart. She said that she's surprised and wished him the best. She's a class act for sure. The other ladies were stunned when Seinne's luggage disappeared from the hotel.

The last date card arrived and it was for Bekah, Tia and Kendall, asking them to meet him at Villa Reale. It's a beautiful estate that they all spent a bit of time exploring before sitting down and breaking off into private conversations with Arie. Kendall had a productive conversation, while Tia planned to tell Arie that Bekah is too inexperienced and not taking things seriously. She's breaking the cardinal rule of using her time to talk about another woman. Kiss of death. Tia brought the conversation back around to her feelings for him and tried to tell him a bit about her family. Then Tia went back and told Bekah that she's worried and bothered by Bekah's doubts about marriage. She said that she told Arie that she thinks she could break his heart and she wants Bekah to be for sure in how she's feeling. Bekah started to cry and said she feels "hurt and misunderstood." She went off crying to Arie and he hugged her and told her "breathe" and that it doesn't matter to him. Bekah tried her best to tell him that she's serious about him and even showed him some gray hairs. See, she's mature! Arie gave his first rose to Kendall.

One rose and a lot of awkward. #TheBachelor pic.twitter.com/ccK4nsSFLE

But that's not all. The date was not over. Arie met up with Bekah and Tia to have an evening portion of the date before handing out the rose. Really? Can't he just hand the thing out already? He has to know at this point, right? Also, Tia is being really annoying all of a sudden. Tia used her second chance at chatting with Arie to tell him that she's in love with him. Bekah, meantime told Arie to have faith in her. Then, Bekah also told Arie that she's falling for him. Arie kissed her but didn't seem overly excited by the news that Bekah was falling for him. At last, it was decision time. Arie gave out his final rose to Tia. She didn't really seem like she deserved it after throwing Bekah under the bus like that earlier. It's not like I was a huge Bekah fan, but she didn't deserve to go out like that. Arie apologized and Bekah told him that she knows it will "end well for him." She took the news well, but then broke down crying inside the limo. Who can blame her? Arie completely broke this poor girl's heart.