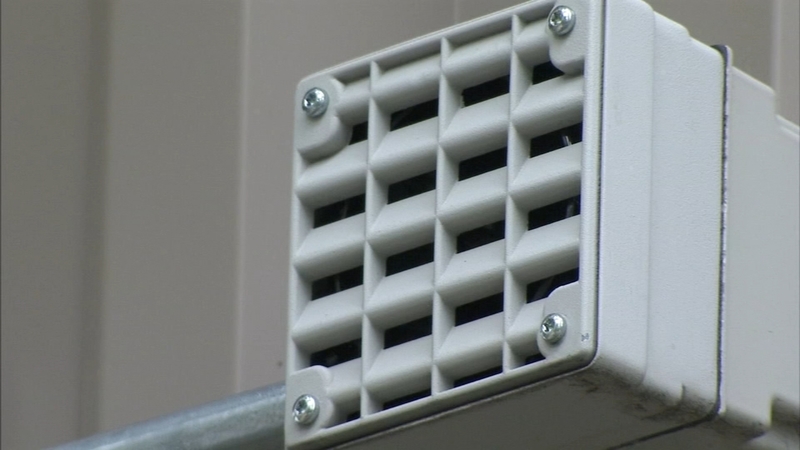 PHILADELPHIA (WPVI) -- Some young people are hearing a high pitched frequency at parks around the city.

According to Philadelphia's Parks and Recreation department, a device called "The Mosquito" has been popping up at parks around the city since 2014.

The device goes off from 10 p.m. to 6 a.m., blaring a high pitched sound that anyone over the age of 25 should not be able to hear.

It's currently installed at 31 city-run locations in Philadelphia. The devices are meant to prevent vandalism and loitering by teens and young people at these public parks.

"It sounds like a high pitched ringing noise," said Kate Sexton, from Fishtown.

RELATED: You can listen to the sound here

"It's annoying, it kind of makes your ears hurt a little," said Analiese Gale, from Ardmore.

These devices are installed at the request of the community, a district council member, or in one case the police.

Some of the devices also have cameras installed into them to catch vandalism or groups gathering late at night causing a disturbance, according to the city's Parks and Recreation Department. CCTV security cameras are currently installed at more than 60 percent of Parks and Rec facilities, with plans for cameras to be installed across all sites with this system.

The city's Parks and Rec Department explained their reasoning for the devices.

"Parks and Rec takes holistic, community-focused approach to maintaining safe and welcoming environments for staff and residents. Working in partnership with community members, advisory councils, friend groups, and local law enforcement, we take an individual approach to safety each site based on its needs," said Maita Soukup, a spokesperson for the Parks and Rec department.

The devices were installed in Washington D.C., but have seen been removed for alleged age discrimination complaints. They have also been banned in some parts of Europe as they may violate the rights of children.

Some young people Action News spoke with said they didn't think it's fair that older people couldn't hear the sound.

Parks and Rec said, in general, they've seen a reduction in vandalism at these sites. The devices cost around $5,000 for the equipment and installation. These devices help maintain a 10 p.m. curfew that exists across the Parks and Recreation system. They are meant to keep teenagers from congregating in parks after hours when parks are closed.