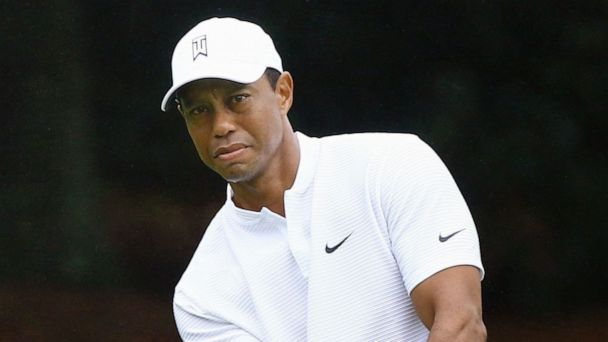 The accident was also due to Woods' "inability to negotiate the curve of the roadway," Los Angeles County Sheriff Alex Villanueva said at a news conference.

The car was moving at 75 mphwhen Woods struck a tree, the sheriff said.

Woods was speeding but the decision was made not to issue a citation, the sheriff said. No one witnessed the crash and Woods did not receive any special treatment from police, Villanueva said.

The golfing great showed no signs of impairment, Villanueva added.

Villanueva said last month that the cause of the crash had been determined and the investigation had concluded.

Woods' team gave permission for the details to be released, Villanueva said Wednesday, adding that under California law, these reports are confidential unless the release is approved by those involved.

Woods was alone, driving a 2021 Genesis GV80 SUV, when he crashed on the border of Rolling Hills estates and Rancho Palos Verdes.

The vehicle hit the center median, crossed into the opposite lane and then hit the curb and a tree, the sheriff said in February. The GV80 rolled over several times and was found several hundred feet away from the center divider with a deployed airbag.

In February the sheriff said no charges were anticipated against Woods, calling the crash "purely an accident."

Woods, who was wearing a seat belt, was taken to a hospital where he underwent a long surgical procedure on his lower right leg and ankle, officials said. Days later he was moved to another hospital for follow-up procedures.

Woods said in a March 16 statement that he was back home in Florida and continuing his recovery.

Woods in a statement Wednesday thanked the good Samaritans and first responders who rushed to the scene. He added, "I will continue to focus on my recovery and family, and thank everyone for the overwhelming support and encouragement I've received throughout this very difficult time."

"He's fully focused on the recovery process," McIlroy said. "And I feel like he's mentally strong enough to get through that. And once he does, broken bones heal, and he's just got to take it step by step."
Report a correction or typo
Related topics:
abc newsnational
Copyright © 2021 ABC News Internet Ventures.
More Videos
From CNN Newsource affiliates
TOP STORIES