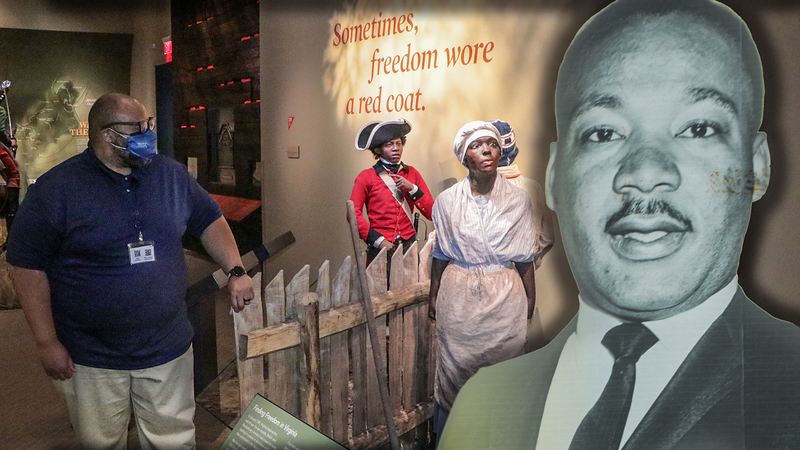 PHILADELPHIA, Pa. (WPVI) -- Today, it was Michael Idriss' job to roll around the discovery cart at the Museum of the American Revolution.

"For the late 1700s, this is the soap that they would have used," he said to a curious young girl. Idriss was demonstrating the various household objects that may have been used by Ona Judge, a woman enslaved to the family of George Washington.

Judge's story is one of several that are being highlighted by the museum in recognition of Martin Luther King Jr. Day, which is Monday, January 18.

"He was going to bat for people who were being marginalized constantly," said Idriss about MLK. "And we're talking about a woman here who was thinking about the same thing for herself."

Throughout this weekend, the museum is offering both in-person and virtual programming to continue sharing these perspectives of unsung revolutionaries from the past. Educators will be on standby to present guests with pop-up talks about the enslaved people of African descent in Virginia. Visitors can also learn about figures like Elizabeth Mumbet Freeman, the first enslaved African-American to emerge victorious from a judicial freedom suit in Massachusetts.

"I like the fact that the museum doesn't shy away from that," said Colleen Doerr of Lansdale, PA, in hopes that history would not repeat itself. "There were African people fighting in the revolution and then there were African slaves in this country at the time."

She was certainly happy she visited the museum today.

"This is awesome," Doerr exclaimed. "It's a lot less crowded."

Another visitor, Kate Heaney of Old City, was fascinated by the stories she found in the quiet halls.

"The past is not nearly as far away from the present as we think it is," she said. "Everything that Martin Luther King said back in the '60s, it's still a thing that people are fighting for."

The Museum itself fought to stay open throughout the pandemic during 2020. Abiding to city-wide mandates, the museum closed its doors more than once. Now in its second week of reopening, it has proven to be a resource for children and families alike.

"A lot of students are unable to go to their classrooms, so this provides another way to have some informal learning for not only students, but also for adults and families," said Megan Bowersox, Visitor Engagement Supervisor.

The Museum of the American Revolution will continue to provide virtual programming for those who are unable to attend in-person. The digital "Finding Freedom" exhibit allows families to explore history on their computer screens.

On Monday morning, the museum will stream a special performance by the Philadelphia Jazz Project, which is dedicated to Martin Luther King Jr.

To learn more about the Museum of the American Revolution and how to reserve tickets, visit their website.

Born in the city of murals, North Philadelphia native Alloyius McIlwaine has contributed more than 100 public works of art to the region.