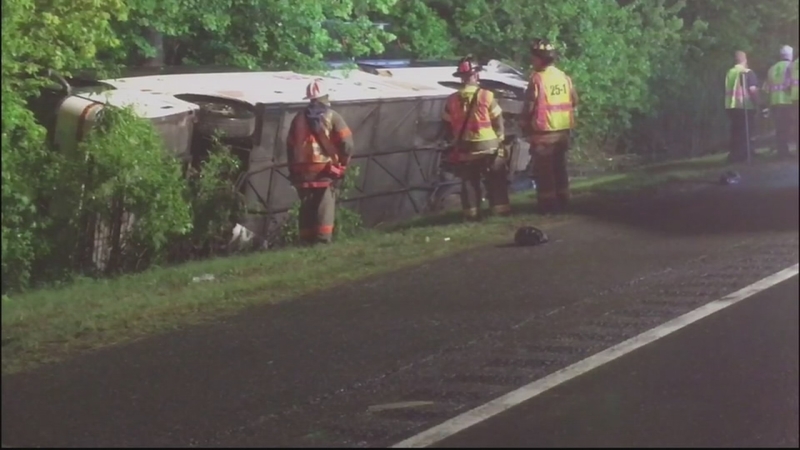 WEST DEPTFORD, N.J. (WPVI) -- Dozens of tour bus passengers were hurt after an overnight crash between a tour bus and a tractor-trailer on the southbound New Jersey Turnpike in West Deptford.

The crash happened at 12:30 a.m. Friday in the southbound lanes near mile marker 19.

VIDEO: Exclusive interviews with passengers who were on the bus
EMBED More News Videos

Watch exclusive video of passengers describing the moments Panda tour bus collided with a tractor trailer on the NJ Turnpike in Gloucester County.

Authorities say a Panda tour bus with 50 people on board was enroute from New York City to Atlanta when it collided with a tractor-trailer.

The bus rolled onto its side and ended up in a grassy area off the shoulder of the highway.

The cab of the Performance Food Group tractor-trailer appeared to have nearly detached.

Watch raw video from the Action Cam of a accident on the NJ turnpike involving a tour bus and tractor trailor.

34 people who were on the bus were taken to four area hospitals to be treated for injuries.

Several were taken to Inspira Medical Center in Woodbury, N.J. The Action Cam was there as some of them arrived for treatment.

Watch raw video from the Action Cam as victims of a tour bus accident on the NJ Turnpike are rushed to the hospital.

Other injured people were taken to Cooper University Hospital in Camden.

It was not immediately clear if the bus driver was among those injured.

Action News is told some of the injuries were serious, but most were minor.

Brendt Christensen has been found guilty on all counts in the murder case of Yingying Zhang.

Some of those who were not hurt were taken to the Woolwich Township Municipal Building.

Action News spoke exclusively to several of those passengers.

"The bus started flipping, then flipped over," said Dwight Baylor of Brooklyn, N.J. "I fell on my back... and they were trying to help me up."

"I heard somebody say, 'Oh, no! Oh, no!' and then a boom," said Lucy Mongy from Harlem, N.Y. "And then I felt like it was correcting direction. And then I heard another boom, and then we started tipping. And then I told my sister, who was next to me... I said, 'Relax your muscles.' Because, you know, they say to do that."

The driver of the tractor-trailer was not injured, and was interviewed at the scene by investigators.

New Jersey State Police closed all southbound traffic at exit 4 after the crash. All lanes had reopened by 4:30 a.m.

Meantime, the difficulties continued Friday morning for many passengers who were not seriously injured.

Melinda Davis from New York City was one of several who told Action News that after the crash happened, they were left stranded.

These passengers were released from the hospital, but not reunited with their belongings. So they were left with no money or identification.

Action News was outside Cooper University Hospital as several argued over the phone with customer service agents about how they were going to get back home to New York City.

"They hung up on us like five times," said Davis. "They told us to find our way back to New York, that that's the only way they could help us."

Most of the residents were headed to Atlanta when the bus crashed. There were some stops scheduled along the way in North and South Carolina.

Shortly after noon, nearly 12 hours after the crash and after several unreturned phone calls, Action News received word from the bus company that a replacement bus was enroute to pick up the stranded passengers and return them to New York.