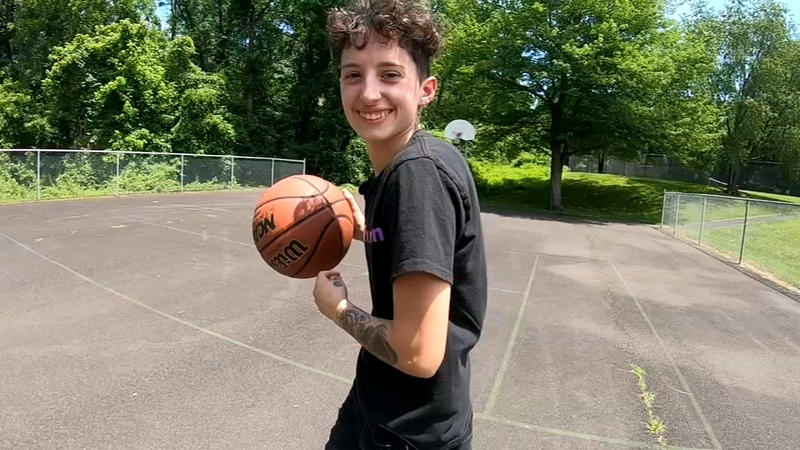 PHILADELPHIA (WPVI) -- The U.S. Education Department on Wednesday expanded its interpretation of federal sex protections to include transgender and gay students, a move that reverses Trump-era policy and stands against proposals in many states to bar transgender girls from school sports.

In a new policy directive, the department said discrimination based on a student's sexual orientation or gender identity will be treated as a violation of Title IX, the 1972 federal law that protects against sex discrimination in education.

The debate on the issue is personal for a teen in Bucks County.

Hunter Felice used to hoop for the girls basketball team at Bensalem High School and played competitive girls soccer. But after his freshman year, he made the decision to live life as his authentic self. Not knowing where he'd fit in, he walked away from the game he loved.

"Where do I belong, the boys' team or the girls' team? And I'm like is there an in the middle?" said Felice.

"And everybody I already knew me as Hannah, so transitioning from Hannah to Hunter I felt like they were going to judge me and I didn't want to deal with that," he said.

It's a decision Felice -- who is now 18 -- says he now regrets as Pennsylvania becomes one of three dozen states to consider anti-trans sports legislation.

#NOW Dept of Ed says transgender students are protected at school by Title IX. This comes during a national debate over whether trans athletes should be allowed to play on sports teams that match their gender identities. A debate that’s personal for a teen in Bucks county. https://t.co/HpOkQl4lRi pic.twitter.com/lIixPDr7kv

In April, a group of lawmakers introduced a bill called the "Save Women's Sports Act", which they say levels the playing field by banning transgender women from playing womens school sports.

"We know that bills like this contribute to the marginalization of our youth and have an adverse impact on their well-being, on their emotional safety and sense of development, and it's horrifying to see these bills are passing," says Shawnee's Givens, with the Attic in South Philadelphia.

In the first five months of 2021, five governors signed bills banning transgender individuals from sports in some capacity.

Governor Tom Wolf has vowed to veto the bill if it makes it to his desk.

Ronan Diamond says this is personal. Diamond is a health and physical education teacher at Bensalem High School, and one of Felice's former coaches.

"I can only imagine for kids now who have that bravery to come out, and then the feeling this may be exclusion from something they love to do," Diamond said.

Diamond says, at the time, he had no idea why Hunter left the sport until years later. And just a couple of months ago, Diamond, too, publicly came out as transgender.

Hunter and I sat down for a candid conversation about the anti-trans legislation that’s been proposed in Pennsylvania, and has this message for other transgender student athletes. @6abc #Pride https://t.co/dgkik8ICS9 pic.twitter.com/zLYj9VIv5F

"I was terrified to be honest with you," Diamond said. "My students and many of my trans and nonbinary students really gave me that kind of push and that's what helped me."

We asked Felice, "What do you think life would have been like had you stuck with it?"

His message to other trans student-athletes is: "Don't give up something you love if you really love it."