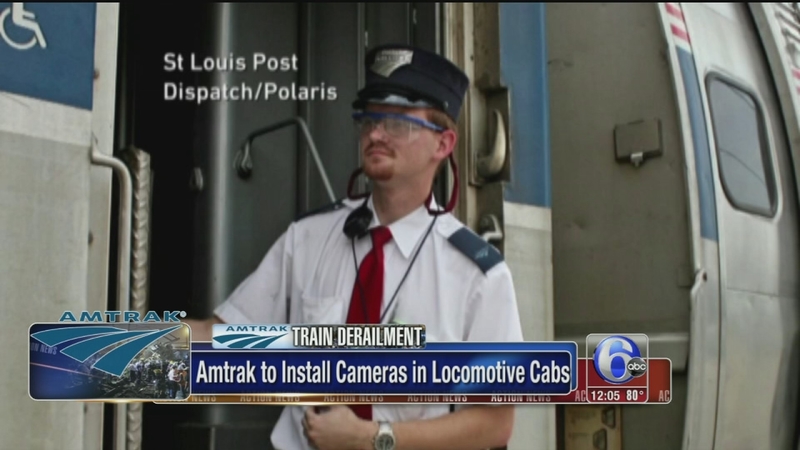 WASHINGTON -- Amtrak said Tuesday it will install video cameras inside locomotive cabs to record the actions of train engineers, a move that follows a deadly derailment earlier this month in which investigators are searching for clues to the train engineer's actions before the crash.

The Amtrak engineer, Brendan Bostian, suffered a head injury in the accident in Philadelphia and has told investigators he can't remember what happened. Northeast Regional train 188 accelerated to a speed of 106 miles per hour in the last minute before entering a curve where it derailed. The speed limit for the curve is 50 mph. The crash left eight people dead and about 200 injured.

The train was equipped with a "black box" data recorder and an outward-facing camera focused on the track ahead, but neither of those devices reveals what was happening inside the cab.

The National Transportation Safety Board has been recommending that the Federal Railroad Administration require passenger and freight train cabs to have audio recorders since the late 1990s. They revised that recommendation five years ago to include inward-facing sound and video recorders.

Railroad administration officials say they support use of the cameras. In the past year, the agency has told the NTSB that it intends to propose regulations requiring the cameras. However, no regulations have been proposed and it typically takes federal agencies many months, if not years, to move from proposals to final regulations.

Joseph Boardman, the railroad's president and CEO, said Amtrak has supported efforts by a railroad administration safety advisory committee made up of industry and labor representatives to come up with standards for the cameras. The committee has yet to issue recommendations.

"We've been supporting it all the way along," he told reporters in a telephone briefing. "It's just a matter of working out some of those details. ... There may be some adjustments we have to make later down the road, but I think it's time to do it and I'm doing it."

Unions representing engineers at Amtrak and other passenger and freight railroads have generally opposed use of the cameras. As recently as 2012, railroad administration officials had also opposed requiring the cameras, telling NTSB they were concerned the cameras might lower employee morale and the images might be used punitively by railroads.

Officials for the Brotherhood of Locomotive Engineers and Trainmen didn't immediately respond to a request for comment.

Cameras will first be installed in 70 new Amtrak locomotives that will power all Northeast Regional and long-distance trains between Washington, New York and Boston, as well as Keystone Service between New York, Philadelphia and Harrisburg, Pennsylvania. Most of those locomotives will be equipped with the cameras before the end of the year, and the rest by sometime this spring, Boardman told reporters in a telephone briefing.

Amtrak is developing a plan for installation of cameras in the rest of its locomotive fleet, including Acela Express locomotives, but no time table has been set for those installations. The railroad has about 300 locomotives nationwide.

It's not unusual for engineers to be killed in train crashes, or to be seriously injured and not remember details clearly. The NTSB first recommended requiring audio recordings of sound in locomotive cabs following a 1996 collision between commuter train and an Amtrak train in Silver Spring, Maryland. None of the commuter train's operating crew members survived, and the board was unable to determine their actions leading up to the crash.

The recommendation was revised to include video cameras with sound in 2010 as the board wrapped up its investigation into one of the worst train collisions in memory - a Metrolink commuter train that failed to obey signals and collided head-on with a Union Pacific freight train near Chatsworth, California. Twenty-five people were killed, including the Metrolink engineer, and over 100 injured in the 2008 crash. 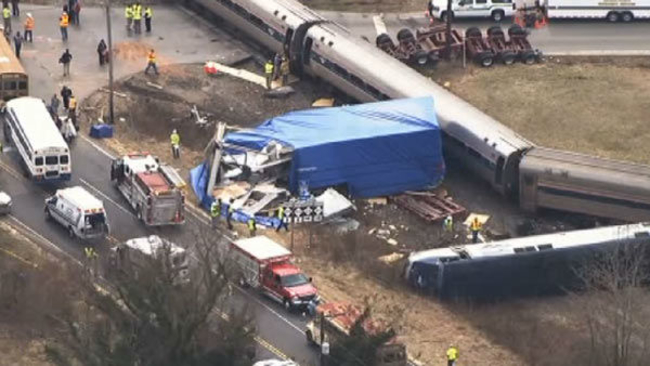