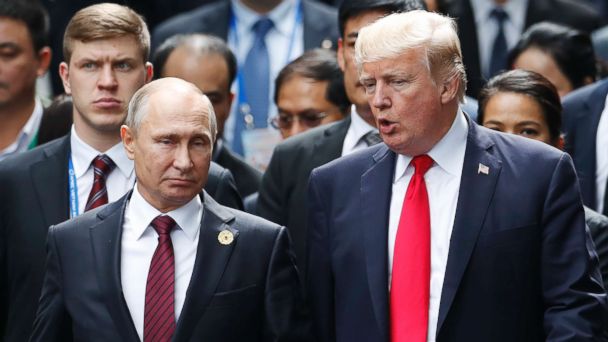 Both the White House and the Kremlin have previously said the two leaders had discussed a possible summit during a call on March 20, when Trump called Putin to congratulate him on his win in Russia's presidential election. At a briefing Monday, the Kremlin aide, Yuri Ushakov, said Trump had suggested on the call that the summit could be held at the White House.

"When our presidents were talking on the telephone, Trump proposed to hold a first meeting in Washington, in the White House," Ushakov was quoted by Russian news agencies as saying.

Ushakov did not say whether Putin had accepted the proposal and said that no specific negotiations for a summit had started, adding that Russia hopes one will take place in some form, according to Russia's state news agency TASS.

"If everything will be OK, I hope that the Americans won't withdraw their proposal to discuss the possibility of holding a summit," Ushakov said, according to TASS.

Ushakov said Putin and Trump had not discussed a precise time frame for the meeting and that there had been no discussions between U.S. and Russian officials on the issue since the call. But he said that Russia believes such a summit is "highly important and needed for both countries and for the whole of the international community."

The White House responded to Ushakov's comments by saying that a number of venues were under consideration for a possible summit, including the White House, but there were "no specific plans" for a meeting at the moment.

"As the president himself confirmed on March 20, hours after his last call with President Putin, the two had discussed a bilateral meeting in the 'not-too-distant future' at a number of potential venues, including the White House," White House press secretary Sarah Sanders told reporters.

After the March 20 phone call, Trump told reporters he and Putin had discussed meeting and that he thought he and Putin would "probably get together in the not-too-distant future" to discuss arms control and the threat of a new nuclear arms race.

The Kremlin has been signaling it wants a high-profile summit between Putin and Trump, likely focused around arms control. Putin touted an arsenal of "invincible" new nuclear weapons in a speech at the beginning of March, calling on the U.S. to treat Moscow as an equal. After Trump and Putin spoke, the Kremlin said it has ordered Russia's foreign minister, Sergey Lavrov, to open discussions with the U.S. about a meeting.

Since then relations between Russia and the U.S. and its allies though have taken another sharp downturn, with Moscow and Washington expelling dozens of each other's diplomats in a clash over the poisoning of a former spy in Britain. Russia expelled 60 U.S. diplomats and closed the American consulate in Saint Petersburg last week after the U.S. threw out 60 Russian diplomats and shut down Russia's consulate in Seattle as part of a coordinated wave of expulsions of Russian diplomats by 27 European and NATO countries in response to the poisoning attack.

The U.S. has backed the British assessment that Russia bears responsibility for the poisoning of the former spy, Sergei Skripal, and his daughter using a military grade nerve agent in the town of Salisbury at the beginning of March. But Trump was criticized at the time of the call for not raising the poisoning with Putin, even though the U.K. had already accused Russia of being behind the assassination attempt. Trump also came under fire for congratulating Putin on winning the election, in which the Kremlin had ensured Putin faced no real challengers.

Ushakov said today the continuing diplomatic confrontation between Western countries and Russia had made it hard to arrange a meeting.