"The male is trying to attract the female and choose him as a mate," said Garrett White, a biological science technician.
WPVI
By Alicia Vitarelli 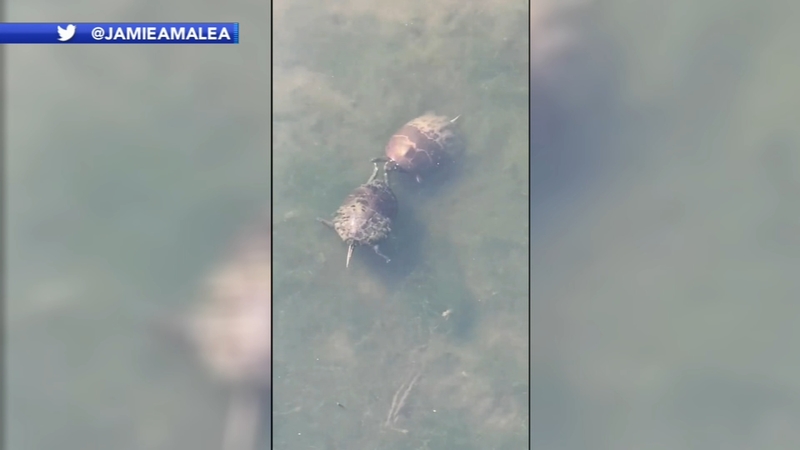 South Philadelphia comedian Jamie Pappas was bird watching at Heinz National Wildlife Refuge on Saturday when she filmed what she thought was a funny moment between the two turtles at a local wildlife refuge, and people can't stop sharing it.

The cute and curious clip has gone wildly viral.

In it, you can see one turtle sort of slapping the other in the face, repeatedly. But experts say they aren't fighting, they're flirting.

"This is part of their spring courtship ritual or courtship display," said Garrett White, a biological science technician at The John Heinz National Wildlife Refuge at Tinicum, a 1000-acre sanctuary in Southwest Philadelphia. It's part of the U.S. Fish and Wildlife Service.

"The male is trying to attract the female and choose him as a mate, so he's showing off a little bit," White added. "He's showing off his claws, which help him protect his territory by digging holes and looking for food."

Pappas posted her video of the flirting Eastern Painted Turtles to Twitter, saying it was "easily the funniest thing I've seen happen all year."

Right now, her video has more than 4.5 million views.

One of her commenters replied: "They are going to make some little turtles, this is EXTREMELY PRIVATE."

"I will say that they continued what whatever was going on under the bridge, so I gave them their privacy," Pappas says. "I'm hoping in a couple of weeks, or whenever I come back, maybe there'll be some baby turtles I can take photos of and complete this true love story."