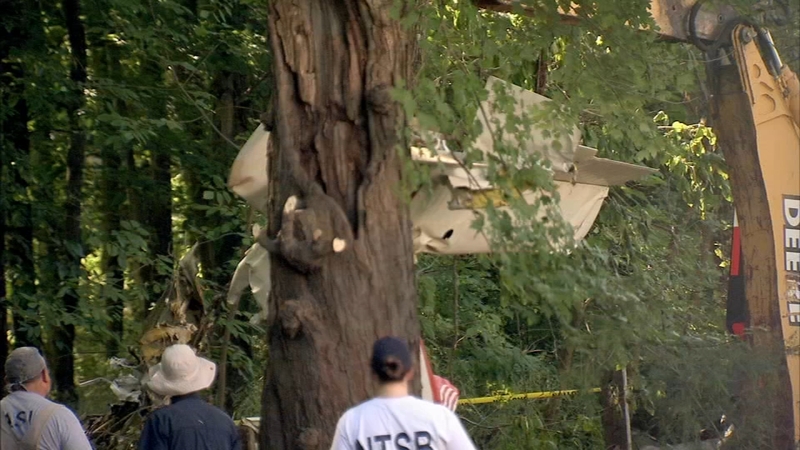 Investigators continued to document the wreckage, which includes the air frame and the engine, as they work to determine what led up to the fatal crash.

On Friday morning, heavy equipment carefully hoisted the wreckage from a wooded area.

Investigators hoisted the wreckage of the plane from a wooded area in Upper Moreland Twp as they work to determine what caused the fatal crash. pic.twitter.com/UZwVkofsaX

Adam Gerhardt from NTSB explained, "This is a broad fact gathering process of looking at every component including the airplane, the engine, maintenance records, pilot records."

He continued, "Today will be a more in-depth look at the condition of that wreckage."

The single-engine Beechcraft Bonanza propeller plane took off from Northeast Philadelphia Airport early Thursday morning and careened through multiple backyards of this residential neighborhood three minutes into the flight.

Chopper 6 was over the scene of a small plane crash in Upper Moreland Township, Montgomery County on August 8, 2019.

Neighbor Chris Crane described, "We heard this loud boom, and my wife got scared. It shook the house."

Crane added, "You see, we have a gazebo back there, a metal gazebo, and it looked like lightning had struck the gazebo and just blown it apart, and here it was a wheel of a plane that hit it."

All three people on board died. The pilot has been identified as Doctor Jasvir Khurana, a pathologist from Temple University.

Authorities say three people are dead after a plane crashas reported by Dann Cuellar during Action News at 11 on August 8, 2019

They have a second daughter, who was not on the flight.

Crane said, "Well, we felt so bad for the three people who were killed in the plane."

There was no distress call and the plane was not equipped with a black box. The wreckage will be taken to a secure facility in Delaware, where the investigation will continue.

"It's possible that we will do a wreckage layout and a more detailed engine examination," Gerhardt told 6abc.