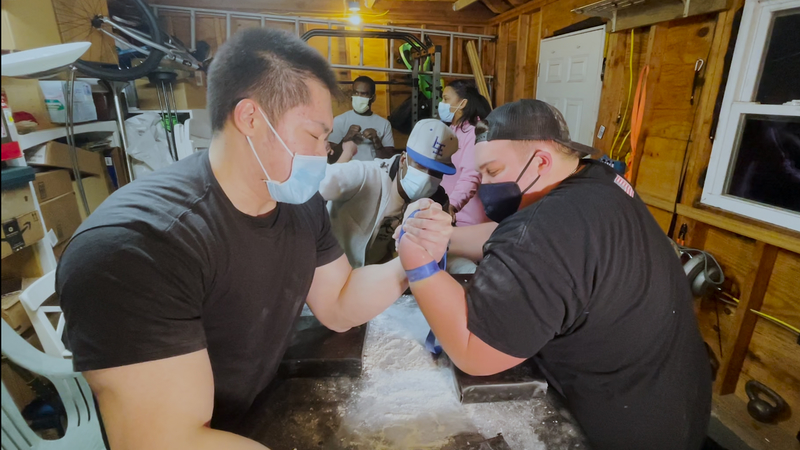 DEER PARK, New York -- Arm wrestling is the underground sport you wish you would have known about sooner.

Three times a week, a group of Long Island men and women from all occupations meet up at Daniel Schwarz's garden shed to work on their arm wrestling techniques with the Urban Arm Wrestling League.

CEO and founder Gerren Nixon wanted to find a way to give back to his community with the sport of arm wrestling.

"We are a family there's a core audience for this sport", said Nixon. "If you are interested in giving back to your community and also being around family that will support you and at the same time push you to be better than arm wrestling is for you."

Nixon drew inspiration from the Sylvestor Stallone movie "Over the Top," his first introduction to the arm wrestling world.

"It's not just a bar sport, it's not something you just do in high school," said Schwarz, a member. "It's a place where a community can build together."

Nixon founded the Urban Arm Wrestling League in 2019, and since the pandemic, the group has continued to grow in numbers of their participating members.

The group has hosted arm-wrestling training, qualifying tournaments, and a championship series, with portions of entry fees earmarked for Long Island charities and his own Wyandanch High School scholarship fund.

Nixon's focus is not only for his members to feel strong and supported by one another, but ultimately to remind them that the goal is to show the community how beneficial this sport can be.

"Everybody's really here to help each other out," said Schwarz. "We're looking to expand to other cities and other states. Really expanding ourselves into another creature if you may to kind of make this a way of life."