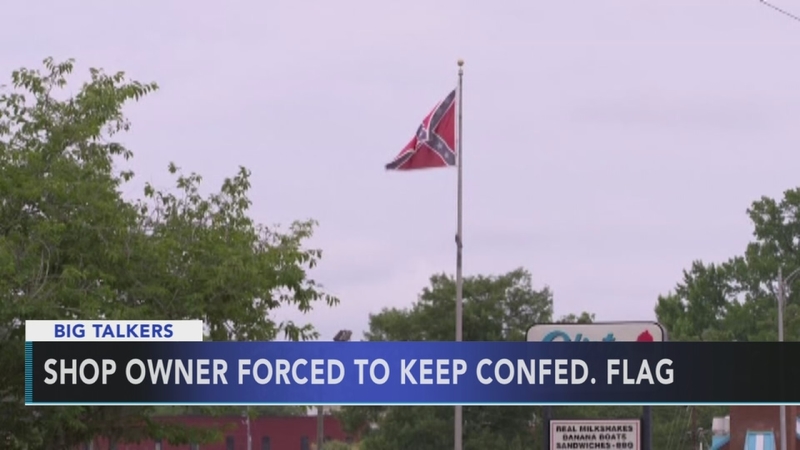 ORANGEBURG, S.C. (WPVI) -- A Confederate flag is flying high above an ice cream shop in South Carolina - and the owner says there is nothing he can do about it.

The flag flies atop a pole, which is right next to the sign for the Edisto River Creamery in Orangeburg and it's dividing everyone who goes in for a scoop.

"That flag needs to be moved and if there's any possible way that I can do it, it's going to be done. Right now, we're gridlocked," said the shop's owner, Tommy Daras.

The building was previously owned by Maurice Bessinger, a politician, activist and restaurant owner.

Bessinger was a staunch supporter of the confederacy and a fierce defender of states' rights and segregation. He passed away in 2014.

Daras and his wife bought the Orangeburg location from Bessinger's children - but not all of it.

Before Bessinger died, he sold the tiny bit of land surrounding this flagpole, a little more than three-thousandths of an acre, for just $5 dollars to the Sons of Confederate Veterans Camp 842 to ensure the flags never came down.

Initially, Daras accepted the flag and a nearby marker. But that changed weeks after his grand opening in the aftermath of the 2015 church shooting in Charleston where Dylann Roof killed nine church members after calling for a race war.

"From that day forward, all hell broke loose for me. My windows were broken out, by phone was ringing off the hook, my employees were harassed. I was fist-fighting with people in the parking lot. Everyone in town assumed it was my property because it looks like it's attached to this building," said Daras.

"It's unfortunate for him but me, personally and a lot of people I know, we'll not shop here because of this flag," said one customer.

As Bessinger's battle for the flag rages on, Daras has hired a lawyer to move the flag.

But the Sons of Confederate Veterans say they're ready to duke it out in court to keep the flag in place, just as Bessinger wanted.