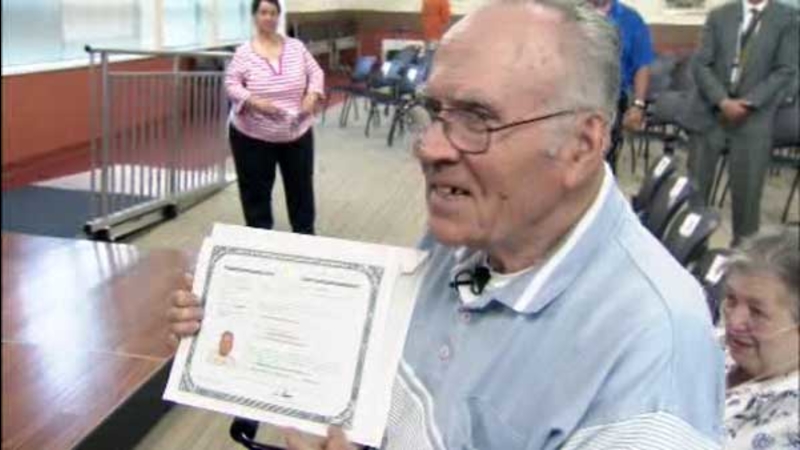 UNIVERSITY CITY (WPVI) -- A Vietnam veteran from Berks County officially became a US Citizen today after a long journey.

The 73-year-old said he lived most of his life unaware that he was not an American citizen.

It's a day Erhard Wensel never thought he'd see. The 73-year-old Boyertown man later served in the US Army in Vietnam.

"I was just drafted so I went. It was my duty to fight for this country," he recalls.

It wasn't until after he applied for social security benefits that he realized he wasn't a citizen.

"I was told in Vietnam that I would come and they would have my paper there but my paper never came," he said.

Mr. Wensel wanted to apply for citizenship but was told it would cost more than $600 and he didn't have the money.

It wasn't until he met a fellow Army veteran that together they found a way to make his dream happen.

"We both served with the 4th infantry division," said Wensel.

"I seen about this gentlemen in Florida that got his citizenship. I thought wow this is a twin," said fellow Army veteran Ed Goehring.

Attorney Elizabeth Ricci has been helping veterans just like Mr. Wensel for free.

She says he is her 5th client like this.

"The message really is that if you're a foreign born vet you need to find proof of your citizenship. If you don't have it you may not be a citizen even if you were told that you were," said Ricci.

Today, for the first time Erhard Wensel proudly stood as both a Veteran and a US citizen.

"It's an honor, a joy. I never thought this would happen," he says.

If you are active duty military or a veteran, the Department of Homeland Security does not charge you a filing fee for citizenship.

They actually have an entire department to handle military members issues.