"It was a change of pace for me to be the one struggling a little to understand people," Brenden Guy says.
WPVI
By 6abc Digital Staff and Jennifer Heller 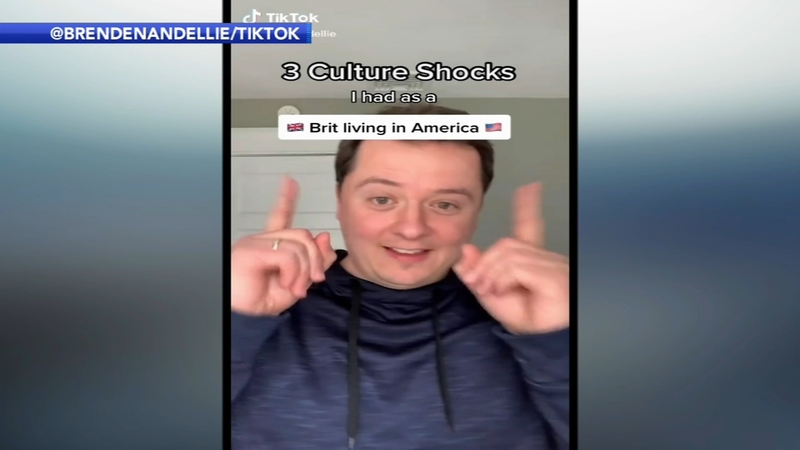 HAVERTOWN, Pennsylvania (WPVI) -- A British man living in Havertown, Delaware County is going viral around the world for his "culture shock" videos.

Brenden Guy posts on TikTok about some of the funny differences between life in the U.S and the U.K.

In his first "culture shock" video, Guy acts out the parts of both waiter and customer and is stunned when an American restaurant offers "free" refills.

In another video, he asks for a menu and is handed a stack of large binders.

The videos have gotten up to eight million views each.

Some other things he pointed out - long sports games, like baseball games going into extra innings, Fourth of July fireworks - when it's not Fourth of July, and strangers saying "hi" on the street.

Louis Angelino III has become a viral sensation after he accidently cleaned the wrong person's home.

In the "language edition" of the "culture shock" videos, Guy asks for biscuits, which are cookies in Britain, and seems confused when the server asks if he wants gravy with them.

Action News spoke to Guy and he says one of the things that makes him feel at home in Philadelphia is the architecture.

"Walking down some streets in the city feels just like being in parts of London. Given the history between our countries, it makes perfect sense, but it was still a shock to take a turn down a street and feel instantly transported back home", Guy said.

When asked if he felt any "culture shocks" specific to the Philadelphia area, he said, "the Delco accent."

"I moved here four years ago after living in San Francisco for ten years and I was not expecting to hear a local accent quite as thick as this one," Guy said. "It was a change of pace for me to be the one struggling a little to understand people because it's usually the other way around!"

Guy said he focused on the fun and lighthearted aspects because he truly loves living here.

A local couple's love story, full of coincidences at every turn, is now grabbing the hearts and "likes" of the lovelorn all over the world.