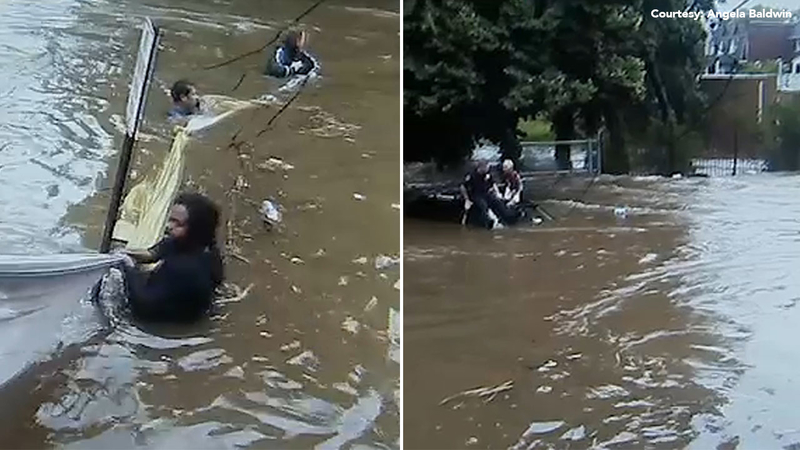 UPPER DARBY, Pa. (WPVI) -- Two bystanders and three Upper Darby police officers came to the rescue of a grandmother who was trapped on the hood of her van in almost five feet of water.

Her 10-year-old granddaughter looked on, yelling, "She can't swim."

Another woman could be heard saying, "Come on, Grandma! You can do it!"

"I saw kids. The kids needed help," Shanks said. "Me and another pedestrian just helped the girls get out of the car; it was one of my neighbors that came out with the sheets."

"Nobody had any rope on them and the fire department was at another location so we had no other way. The floodwaters were rising out of the car so we had to get the lady out of the car," Oreskovich said.

Three blocks over, Upper Darby police officer Travis Hall rescued people out of their cars, only for Good Samaritans to come to his rescue.

"The sewer inlet must have collapsed and the swirling water took Hall and cut his legs out from under him and he started to go down into the sewer outlet," Upper Darby Police Superintendent Michael Chitwood said.

Governor Tom Wolf activated the Commonwealth Response Coordination Center. The National Guard was told to be on standby in the event they were needed.