Cold temps bring a burst of snow to Delaware Valley 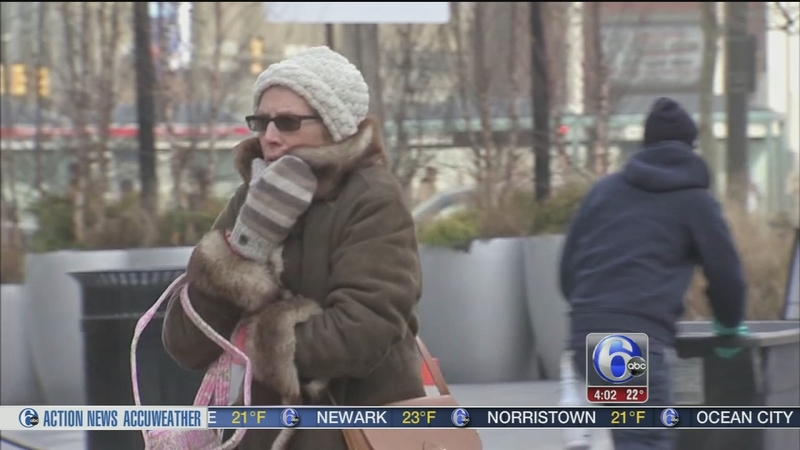 PENNSAUKEN, N.J. (WPVI) -- It's December, and it was bound to happen: Bitter cold and biting wind have arrived.

Across the region Thursday, the fashion sense was the same: bundle up.

"I got a lot on," said Janice Brown of North Philadelphia. "I got my thermals, my sweater, my scarf, my coat, my hoodie. I bundle up."

With temperatures in the teens and 20s, it was downright bone-chilling and the wind chill made it even worse.

Those we talked to said if you had to be out in the elements, be prepared for the fight against Old Man Winter with lots of layers.

"I am very cold," said Bernice Bickens of Fishtown. "My kids are crazy because they don't act like it is cold. But I am cold."

"A lot of thermal: thick gloves, scarves, hats, Under Armor underneath, lots of boots, double socks," said Lori Crane of Cheltenham, Pennsylvania. "I don't care for it too much. I'd rather the hot, 98-degree weather."

For the most part, the sentiment was the same for everyone. Working and being out in the brutal cold is just not fun.

But we did find some people who said, "Bring it on - the colder the better."

And now that the cold is here, it's no secret. Love it or not, snow is soon to follow.

"Hopefully we get about 2 feet altogether for the entire winter," said Khalil Amenra of West Philadelphia.

"Take it one day at a time," he added, when asked what advice he would give people visiting from warmer climates. "It gets better. We have four seasons."

Some snow fell early Thursday morning in parts of the Lehigh and Delaware Valleys.

It was more like a starter snow that could be seen on grassy surfaces, house roofs and cars. Streets looked wet, but did not appear slick.

Yes! That's snow , not much but it's here in Camden County !! @6abc pic.twitter.com/8xCZ0GrV4A

Route 70, Route 38 and the Ben Franklin Bridge were all treated in preparation for the overnight snow.

A little more snow appeared to have fallen in Moorestown, New Jersey, than other areas, making the area look like a winter wonderland.

In addition to the snow, temperatures were very cold and were expected to dip further during the day, along with wind chills.

Folks that work outside told Action News how they prepare for the cold.

Paul Roman of Camden, New Jersey, said, "We bundle up: gloves, boots, and long johns. Hopefully they change their mind, and send us back home."

Another worker said, "Three layers - gloves, everything. I got to keep warm. And I got to keep moving."
Related topics:
weathern.j. newsphilly newssnow
Copyright © 2021 WPVI-TV. All Rights Reserved.
More Videos
From CNN Newsource affiliates
TOP STORIES