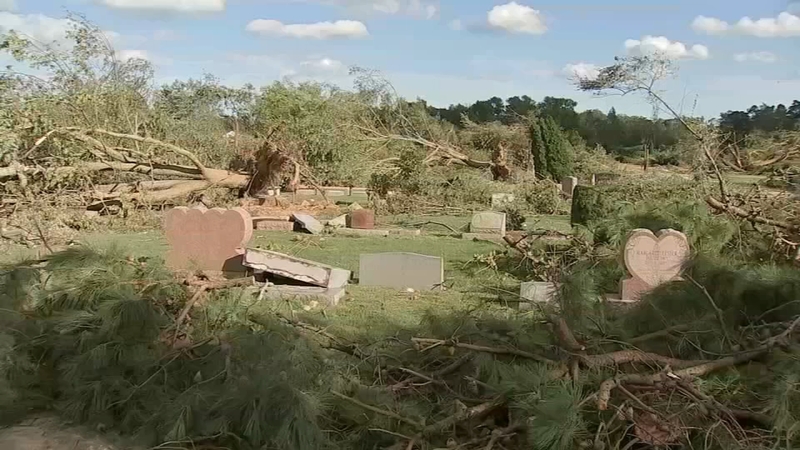 ATLANTIC CITY, New Jersey (WPVI) -- Tropical Storm Isaias spawned tornadoes across the region on Tuesday, including one that left a path of destruction in Cape May County, New Jersey.

Cleanup is underway in Upper Township after a tornado tore through the area.

Viewer video captured the funnel cloud making its way through the area. Homes and businesses along Route 9 were damaged by wind and falling trees.

"I heard a lot of noise. I didn't really have too much damage to my house, I was one of the lucky ones," said Chuck Battersby of Upper Township.

The wind pushed cars together, forcing trees to topple. Action News spoke to the woman who was trapped inside her car when it happened.

"It was terrifying. The wind was really loud. It was crazy, it all happened fast. The tree was coming right at me. I laid down in case it was going to just totally come down into the car," said Terri Loncar with Compassionate Care Hospice.

Loncar was parked outside of the office where she works, which also sustained damage.

Employees working at this business took shelter in the basement as the roof was partially blown off in Marmora. No injuries. @6abc #6abcaction pic.twitter.com/g6VOdZJney

The storm was so strong Chuck Baker had to seek shelter at his car wash business while physically shielding his son.

"What I did was I got in back of him and put my hands up to shelter him so he wouldn't get hit with the glass," said Baker.

Next door, his neighbor, a 90-year-old woman, had trees fall on her home, cars and in her pool.

But Baker's son, Cody says, "The community will come together and help them out."

Drone 6 was overhead after the storm caused damage at the Seaside Cemetery.

"Our hearts just go out to the families. The resting place of their family members and it's so devastating to see this," said Maryanne Callahan of Marmora.

Upper Township officials say while significant damage was done, there have been no reports of serious injuries.

Drone 6 footage of the damage left by the tornado that went through Marmora, NJ. @6abc pic.twitter.com/fzOJui3TUk

According to county officials, roughly 6 to 12 structures were damaged in Marmora.

"It cut a swath through the Marmora area of Upper Township, basically southeast to northwest, maybe a little over a mile of an area," said Scott Morgan, OEM coordinator for the township.

Officials say in addition to Marmora, other storm-related damage was reported in Wildwood where a motel roof was blown off.

The storm also caused damage at the Cape May County Park and Zoo.

"This was a very powerful storm and I am thankful that it appears no one in Cape May County was injured," said Thornton. "We know many people have a lot on their hands to fix the damaged buildings and roofs. I just wanted to remind everyone to be safe out there. If you see a downed power line stay away from it."

In Ocean City, strong winds and stinging rain lasted for hours. Power lines sparked, people scrambled to secure their homes and businesses and some just had to see the churning ocean for themselves.

"You just like to see the power of nature," said Barbara Lewis of Northeast Philadelphia.

At the Central Ocean City Union Chapel on 32nd Street and Central Avenue, the storm blew down the steeple.

No injuries were reported on Tuesday.