How Mike Trout could wind up with Bryce Harper in Philly 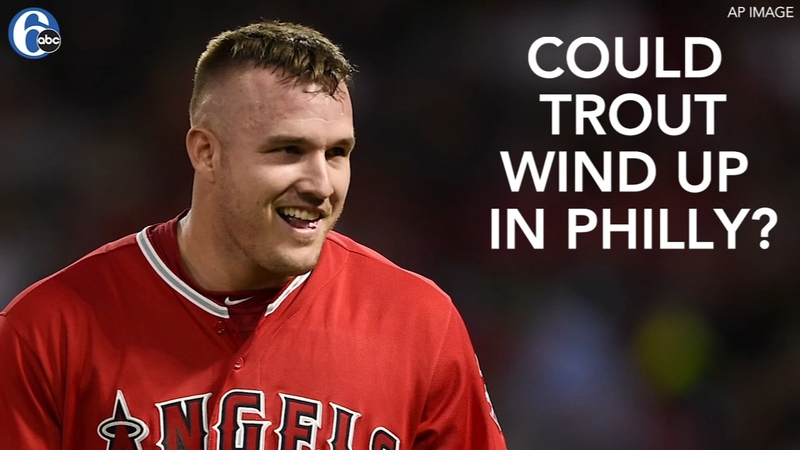 How Mike Trout could wind up with Bryce Harper in Philly

The ink is barely dry on Bryce Harper's contract with the Philadelphia Phillies, and Mike Trout is under contract with the Los Angeles Angels for the next two seasons, but everyone already is talking about what might happen after the 2020 season. That's when Trout can hit free agency and sign with the Phillies, teaming up with the player he was so closely linked with back in 2012, when both were hotshot rookies.

Consider some of the comments after Harper's 13-year, $330 million deal with the Phillies was announced:

Jeff Passan, ESPN.com: "The deal is mutually beneficial. Philadelphia adds a middle-of-the-order bat to a lineup that already includes the homegrown Rhys Hoskins and a pair of dangerous trade acquisitions: catcher J.T. Realmuto and shortstop Jean Segura. It gets to sell tickets and sponsorships around Harper. And because the deal's average annual value is $25.4 million, it gets flexibility to spend more in coming offseasons and not run the risk of exceeding the luxury-tax threshold. In other words: Yes, an outfield with Harper and Philadelphia-area native Mike Trout is realistic."

Tom Verducci, SI.com: "That AAV still leaves room for the Phillies to bid on Mike Trout if Trout becomes a free agent after the 2020 season. A club source said before this offseason began that the club had enough money to sign both Machado and Harper, but wanted just one of them in order to keep money in reserve for Trout."

Ken Rosenthal, The Athletic: "So, $330 million was the magic number. The average fan probably sees no further than that total. The average Phillies fan likely is salivating, knowing Harper's relatively low AAV will give the team greater room under the luxury-tax threshold and enable it to pursue other expensive players in the future -- most notably Mike Trout if he becomes a free agent after the 2020 season."

Joe Sheehan's newsletter: "There's no need to be coy; Mike Trout is scheduled to reach free agency at the end of the 2020 season, and he plays for a team that has made the postseason once in his seven full seasons, one that is unlikely to get to October in 2019."

Then came the hammer, from Harper himself during his introductory news conference in Clearwater, Florida, on Saturday: "I'm making 26 [million] a year. That's going to be able to bring some other guys in as well to build up this organization. There's another guy in about two years that comes off the books. We'll see what happens with that."

If that sounds like a recruiting pitch for Trout, well, that's exactly what it was. Harper even said he consulted with Trout during his free-agent process. Of course, there is no guarantee that Trout reaches free agency. The Angels remain hopeful about signing him to a mega-extension, although if that happens it likely won't happen until next offseason. On Friday, the day after Harper's agreement with the Phillies broke, Trout remained mum on his future, saying his focus is on getting ready for the season.

"You don't worry about anything else. That's the mindset right now," he told reporters.

Still, Trout already signed one extension with the Angels. His six-year, $144.5 million contract back in the spring of 2014 bought out three years of free agency at $33.25 million per year. So don't discount the possibility of Trout remaining with the Angels -- although it would certainly help if the franchise can show it has a brighter future than what Trout has experienced in the recent past, with three straight losing seasons while staring up at the powerhouse Astros in the AL West standings.

If Trout doesn't sign an extension with the Angels, he will hit free agency in advance of his age-29 season in 2021. That's three years older than Harper (and Manny Machado) were this offseason, but Trout will still be in the midst of his prime -- and, remember, this is a player who has the most career WAR through age 26 of any position player in history. Consider the value of Harper and Machado the past three seasons compared with Trout's:

Given that Machado received $300 million and Harper $330 million, imagine what Trout -- even at three years older -- will receive. MLB Network analyst Eric Byrnes, perhaps in a bit of hyperbole, recently threw out the idea of close to a billion dollars. That's not going to happen, but a 10-year, $500 million contract doesn't sound outrageous.

This is where we circle back to the Phillies, because as the writers above alluded to, there likely will be room in the payroll to make a push. Here are the players the Phillies have locked up for the 2021 season:

They'll have to pay other players by then as well. Realmuto is a free agent after 2020 and the Phillies will be looking to re-sign him, considering their top catching prospect played only short-season ball in 2018. Hoskins will be deep into his arbitration years and becoming more expensive. They'll either need some of the young starting pitchers to improve or supplement the rotation around Nola with some free agents.

Note as well, however, that McCutchen's deal runs only through 2021, so there would be just a one-year overlap with Trout. Herrera could be traded to clear some payroll space. But the point here: The Phillies can afford both Harper and Trout. The Phillies' payroll was $183 million in 2014, so there's no reason they shouldn't be able to soar well beyond $200 million by 2021 if desired -- especially if you consider the large profits the organization presumably has pocketed in recent years when the payroll shrank as low as $103 million. Not that baseball owners necessarily put that money into their team's future.

Also, imagine what having both Harper and Trout would do for attendance. Phillies attendance peaked at 3.77 million in 2010. It fell under 2 million from 2015 to 2017 during the rebuilding years, before climbing back up to 2.15 million last year as the team stayed in the playoff race for most of the season. There is enormous revenue potential just sitting in the form of 1.5 million missing fans if GM Matt Klentak and the front office can build a winning team around Harper.

There is another road to consider. Maybe Trout leaves the Angels ... but doesn't sign with the Phillies. The bidding was a little tepid for Harper and Machado, but it seems less likely that will be the case for Trout. Look at the center-field situations for some other big-market teams:

: Aaron Hicks. New York just signed Hicks to a seven-year extension, but he'll be 31 in 2021 and a candidate to move from center field anyway. The bigger issues: Can the Yankees afford Giancarlo Stanton and an Aaron Judge extension (he's eligible for free agency after 2022) and Trout? Well, sure, they're the Yankees. The franchise is worth an estimated $4 billion.

: Jackie Bradley Jr. He'll hit free agency the same year as Trout. Of course, so will Mookie Betts, and Boston's focus will be on re-signing Betts over going after Trout. But what about a Trout/Betts outfield?

: A.J. Pollock. He's signed through at least 2022, but he's already entering his age-31 season and could be pushed to a corner by 2021. The Dodgers have shown an aversion to long-term deals and were interested in Harper only on a shorter-term deal with a higher AAV. Well, Trout is not Harper. Also, the Dodgers have a lot of money coming off the books in upcoming seasons. Maybe Trout makes a crosstown move.

: George Springer. He also hits free agency after 2020. Hmm. They'll have to consider extensions for Alex Bregman and Carlos Correa down the road, which could clog up the payroll alongside Jose Altuve.

: Albert Almora. The Cubs' outfield with Almora, Kyle Schwarber and Jason Heyward isn't that great and certainly doesn't project to be great in 2021. Kris Bryant, Anthony Rizzo and Javier Baez are all team-controlled through 2021, so the Cubs will be dealing with those contract issues at that time as well.

: Delino DeShields Jr. The Rangers move into their new stadium in 2020. They have only $33.25 million in contract commitments for 2021. They'll have money to spend.

: Steven Duggar. They have the worst outfield in the majors. They've made big pushes but failed to land Stanton and now Harper.

: Victor Robles. The one big-market team set in center field for the foreseeable future.

Anyway, betting odds would certainly rate the Phillies and Angels as favorites right now. We'll have two years -- two long years -- to discuss Mike Trout's future. In the meantime, let's actually see Harper suit up for his first Phillies game before we put Trout next to him in the Philadelphia outfield in 2021. 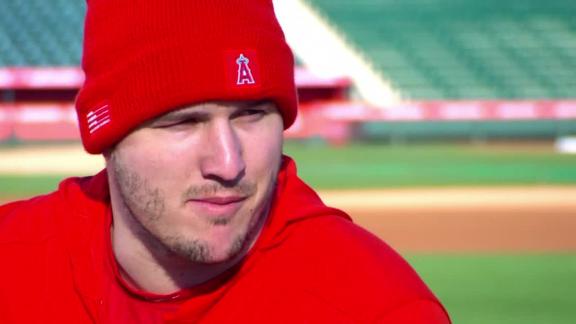 Trout focused on improvement, not free agency
Mike Trout discusses improving his game, being confident on the basepaths, his upcoming free agency and managing his two-strike approach. 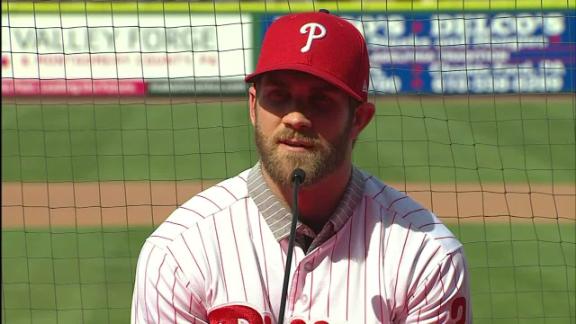