Conditions were treacherous in many places on Monday as the snow fell.
WPVI
By Trish Hartman and Bob Brooks 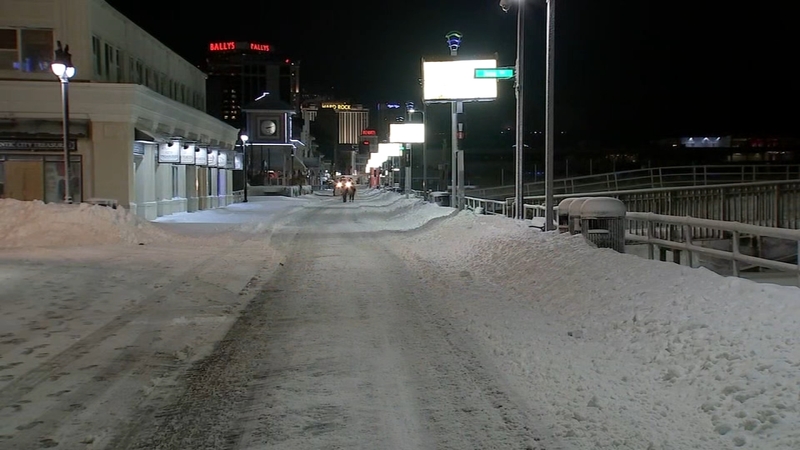 South Jersey cleaning up after first big snowstorm of 2022

WILDWOOD, New Jersey (WPVI) -- The cleanup effort continues in South Jersey after a winter storm dropped nearly a foot of snow in some places.

Take it from the folks trying to get rid of the snow: conditions were treacherous in many places on Monday as the snow fell.

"Terrible. People shouldn't be out here," said Gary Troiano of Wildwood, who was spending his day clearing parking lots. "I saw a car spin out trying to get on the Parkway this morning."

The biting winds swirled the snow around down the shore as inch after inch accumulated in Wildwood.

The storm is winding down, but the cleanup continues in South Jersey after a winter storm dropped nearly a foot of snow in some places.

New Jersey state officials asked people to immediately report any power outages and to stay away from wires that may have come down from the storm.

They also urged caution on the roads.

"On the Garden State Parkway, we are at speed reductions from basically Toms River south. As the Governor stated there is still accumulating snow. There are high winds. Our plow teams are working hard to keep up with the storm," said N.J. Dept. of Transportation Commissioner Diane Gutierrez-Scaccetti during a virtual weather briefing Monday afternoon.

About 13 inches of snow fell in Atlantic City. It was the largest snowfall in four years for the city.

Maria Quintero and her family, who were in town visiting from Colombia, got their first taste of a snowstorm.

UPDATED TOTALS
Atlantic City has seen its largest snowfall in 4 years while Philadelphia saw hardly anything. At the airport the official measurement was 1.0" while western and northern parts of the city saw nothing more than a few flakes. pic.twitter.com/hmhaoFl4fQ

Flooding was also an issue Monday.

The shore communities remain under a coastal flood advisory through Tuesday afternoon.

Rosemarie Hufner sent us photos from Stone Harbor during Monday's high tide, showing not only flooded streets, but chunks of ice floating near 86th Street and Third Avenue at high tide.

She's been through many storms, but this she said was a first.

"Street flooding during I guess full moons with storms is likely but the ice - this is the first time I've seen it. I've been here through snow before but nothing like this," said Hufner.