Winds bring down 65 ft. tree onto home in Westville 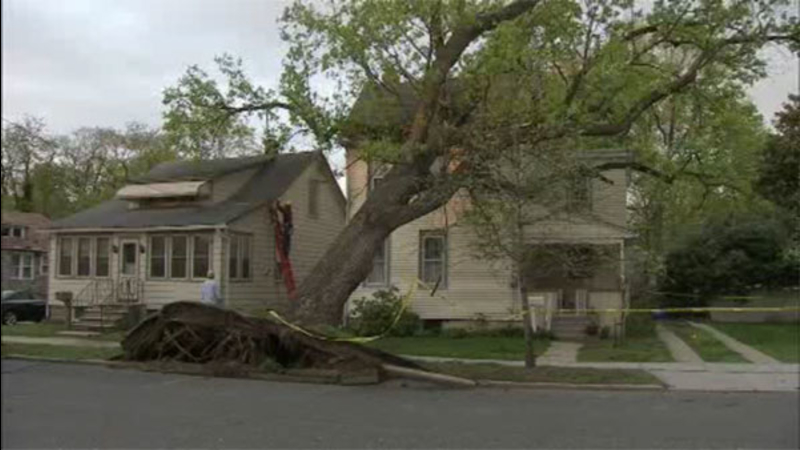 VIDEO: Winds bring down 65 ft. tree onto home in NJ

WESTVILLE, N.J. (WPVI) -- The whipping winds brought down a massive 65 foot tree onto a home in Westville, Gloucester County.

It happened on the 200 block of West Olive Street.

"I've been worried about this tree for a while, I knew something was gonna happen," said Mick Ward, neighbor.

Ward, who lives next door, heard the winds howling in late Wednesday afternoon and immediately went outside.

He had long worried that the massive tree next door - a 65 foot poplar - would come tumbling down someday.

A surveillance camera owned by neighbor Jeffrey Pierson captured part of the tree as it came down.

"For some reason I had a gut feeling and I came. Not two minutes at my door and I looked at it, I watched it almost in amazement, 'You gotta be kidding me.' I yelled started yelling at my wife, 'Mary! Mary! Get out of here! Get out of here! The tree is coming down,'" said Ward.

The homeowner, who is known in the neighborhood for her love of trees and animals, was not home at the time.

"I was worried about my animals because they're my best friends," said Susan.

Friends helped her carry out a number of pets including birds and dogs after city officials told her it was unsafe to stay.

The tree, which ways several thousand pounds, was left leaning against the home.

It's a tree she loved for its shade in the summertime.

"It probably was there I'm thinking when the house was built around 1870 I'm thinking - a poplar tulip," said Susan.

"Thank God nobody was hurt but we've been waiting for this to happen," said Ward.